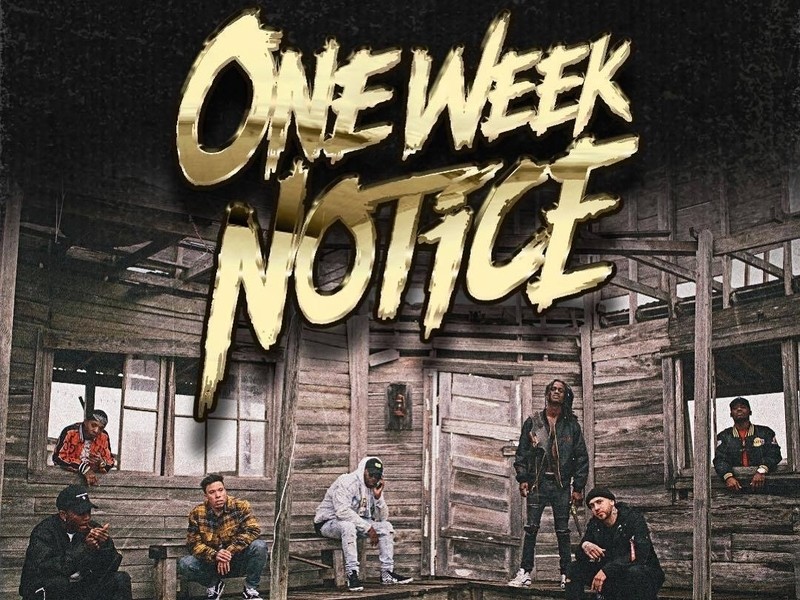 DXHQ – In today’s microwave society, it’s rare to see artists recording together. Tracks are sent through email and Dropbox as rappers and producers go about their lives from different corners the globe. So when nine artists got together in Austin, Texas to record an album in a week? DX had to find out more.

Dame Ritter Still Movin’ and Beatstars reached out to nine creators from different walks life and put them up in a house for one week in December — the outcome was One Week Notice. Dizzy Wright, Audio Push, Emilio Rojas, Jarren Benton, Demrick, Reezy, and producers DJ Hoppa and Kato came together to create a body work that most collectives would be hard pressed to create in a month. The #DXLive team was able to catch up with most the crew earlier in January as they prepared for the release and an epic show in Long Beach that fans who went won’t soon forget.

As for how One Week Notice came about, DJ Hoppa said, “There was a crib. Beatstars had a studio in Austin. Dame hit us all up and said ‘Get together in one week and] try to make an album.’ And we made the shit. One Week Notice. We recorded for five days and the last two days we were just tightening it up. It was like a one week, Hip Hop summer camp.”

“There was like bunk beds, the situation was like the barracks up in there,” says Emilio Rojas.

“You weren’t trying to bottom bunk it under a couple these guys.” Demrick adds. “It was like a music vacation … We went to a remote location and got a nice Airbnb and it just was relaxing. Then on top that] we all homies. All us have done music together so to get us all in one room where there was no distractions was very easy.”

The collective also discussed how the recording and creative process worked with having that many artists.

“We really made an effort to make sure everyone was on the project,” Rojas explained. “I think that just keeps it super interesting; the fact that we were just willing to let go the spotlight and allow everybody to shine, you know? Ego can fuck you up, man.”

“A beat would just get played and these guys immediately jumped on the shit,” DJ Hoppa added. “Every idea was just accepted. Tracks were made so fast.”

“The recording process was my favorite moment],” said Reezy. “I produce as well but with Kato and Hoppa doing most the beats, I get to be a full-time artist. I felt like I was the one who had the most to learn because everybody else been seasoned, been in the game, learned what they fan base like and know what’s going on. I’m coming up, I’m learning. I’m on video record. I’m taking in all the game and learning everything.”

Oktane Audio Push also shared his thoughts. “Everybody can spit so it was like X-Men in the Danger] Room. I knew everybody could spit so whatever beat it was, it was just natural. I could just wake up and] do my shit. We went to the studio the first day but] once we got to the house I] just unloaded the backpack because I carry a setup myself. Demrick] carries a setup himself. So it’s like we just unloaded it, put a Voltron together and was like, ‘Nigga we right here.’ I’d wake right up and] bowl up and record my shit right there.”

With so many creatives working on the same project, DJ Hoppa explained how they all served as the Executive Producer: “The group text is the executive producer. We all kinda just pieced it together. We didn’t actually pick the songs while we were out there. We were just kinda polishing them up, doing the mixes and drops. The first five days were just recording and] then it was like, ‘Oh shit, we kinda gotta like sequence stuff and turn them into songs and shit.”

The cohesion and energy with this group extends well beyond the studio. One Week Notice had their first show together in Long Beach this past Sunday (January 7). An hour into the show, and only two songs into Dizzy’s set, security rushed the stage and carried a member the posse out the building for smoking. Over a raucous crowd, Dizzy and the crew shut down the show over the aggressiveness the venue staff. The lights come up and where most artists would retreat to the green room and leave, Audio Push invites every fan to the stage to take a group photo while Dizzy, Jarren, Reezy, Demrick, and Emilio shake every hand and hold every conversation with whoever wanted their time. As the venue begins to empty, Price Audio Push invites everyone to the parking lot where he plugged his phone into his car speakers and did an impromptu encore.

Could there be a sequel?

“With all the unreleased music we got? It’s crazy,” Oktane said.

For more exclusive interviews tune in to #DXLive every Thursday at 10 a.m. PST.