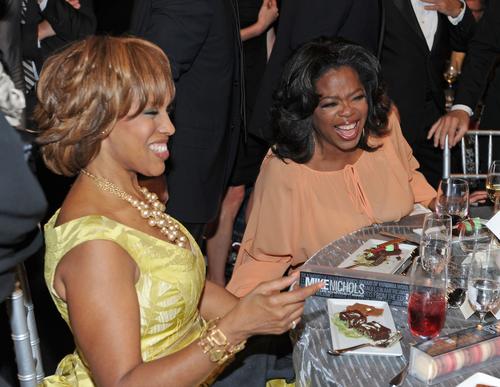 Oprah Winfrey Is Not Actively Considering Presidential Run, As Per Gayle King

Oprah Winfrey has been all the talk the past three days, and not for her book club either. Following her impeccable speech at Sunday’s Golden Globes ceremony where she hinted at a “new day” being just around the corner, rumors have been running rampant that the TV magnate is actively considering a Presidential run, one that might lead to her squaring f against Donald Trump. However, her best gal pal Gayle King isn’t ready to print those campaign posters just yet.

In an appearance on CBS This Morning, King denied the speculation that Oprah is actively considering running for fice, although she did admit that the mogul is “intrigued” by the idea. “She loves this country and would like to be service in some way,” she added. However, when asked about Stedman Graham’s comments that added even more fuel to the “Oprah for President” fire, that’s where things got a little strange.

“Stedman says that he thought the reporter said to him ‘Would she make a good president?'” King said. “And he said ‘Absolutely she would.’ That’s how he interpreted the question, because this is the thing – Stedman would never so cavalierly say absolutely she would do it. It’s up to the people. He would never do that.” However, that’s not really what happened. Graham told the Los Angeles that she would “absolutely” run, leading to some skepticism coming from the other two hosts in response to King’s spin take.

Though the road to a potential Oprah presidency will be long and arduous, there’s no doubt that there’s a huge faction the American populous who want to see her become Commander-In-Chief. Well, maybe not Donald Trump, Jr., but many other people.