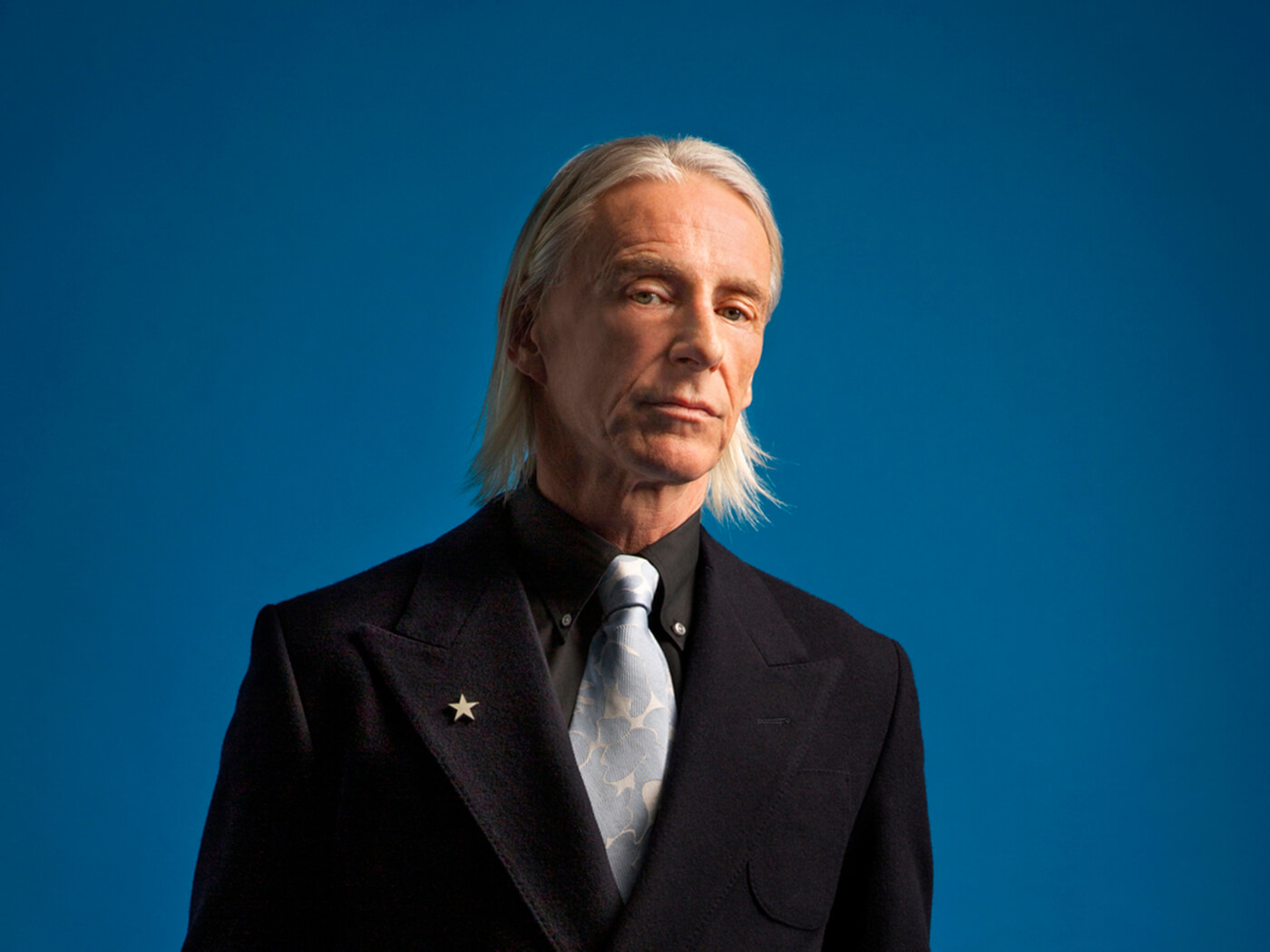 Now into his seventh decade, Paul Weller has resisted any and all invitations to write his memoir. At the last count six biographies bearing his name have been published, but ever the modernist, Weller views his creative past rather like a motorist might look in the rear-view mirror – foot on the pedal, in constant forward motion.

However, for anyone seeking a set text to lead us to the existential essence of Wellerworld, there is one book that will get you further than the others. Published in 2007, Suburban 100 saw Weller select his favourite lyrics spanning his time with The Jam, plus The Style Council and his solo years. Included almost as footnotes at the bottom of every lyric were quotes from Weller himself, shedding light on the inspirations, circumstances and intentions that helped give life to modern standards “That’s Entertainment”, “Shout To The Top” and “Wild Wood”.

Let’s look at what Weller has to say about The Jam’s second No 1 single “Start!”: “I was thinking about the power of music and the power of a pop song, how two or three minutes could say so much to so many. And what’s it always meant to me. I was stripping words back to the bare minimum at the time, just getting to the point. Pop music, for want of a better term, is the only art form that can communicate directly and emotionally on that level.”

It almost certainly wouldn’t have occurred to Weller as he alighted upon the title of his new album that 40 years had elapsed since “Start!”; a proper modernist doesn’t dwell too long on these things. But the rest of us are not bound by those rules. And so it’s oddly touching to see the title track on his 16th solo album worshipping at the same thematic altar as its distant predecessor, albeit with a lolloping funk gate, the occasional smoke plume of woodwind and garnish of G-funk keyboard, with space between those constituent parts for Weller to navigate a familiar line of inquiry: “Who raised the game when the game was poor/And sent our heads in search of more/Made you question all you’d learnt before?/Ah, Fat – Pop!”

The existence of Fat Pop is proof that music can act as a lifeline even in the most turbulent of times. Had the world not ground to a halt in 2020, much of Weller’s year would have been spent promoting and touring On Sunset, its acclaimed predecessor. For the proprietor of Black Barn Studios, set in the Surrey countryside, not far from the Woking streets of his childhood, here was a chance to maintain his momentum – and to have fun in a world which, at times, seemed bereft of it. It’s there from the outset. Vocally and lyrically, “Cosmic Fringes” dips from the same inkwell as a young Ray Davies, refracted through a bolshy persona that recalls recent Baxter Dury albums. Over a krautrock groove, Weller recasts himself as a self-styled online warrior, omnipotent in front of his screen – “Stumble to the fridge/And back to bed again” – but impotent beyond the home he never leaves.

In the tradition of previous opening tracks “Green” (Sonik Kicks) and “Mirror Ball” (On Sunset), as well as the title track to Wake Up The Nation, you suspect “Cosmic Fringes” is there to shake up expectations, ruffle a few feather cuts. For all of that, though, what sits at the heart of the record is a cluster of songs that, for all their experimental flourishes, draw deepest and most audibly on Weller’s lifelong love of soul music. Turning in his most prominent guest vocal since Kate Bush asked him to help her on her 2011 song “Wild Man”, that’s sometime Amen Corner legend Andy Fairweather Low trading lines with Weller on “Testify”. If Curtis Mayfield or Jon Lucien were still around, it’s no great stretch to imagine them assisting on “That Pleasure” – a sun-soaked call to love that feels like a sublime companion piece to a handful of cosmic soul invocations from the Modfather’s canon, most notably On Sunset’s “Baptiste” and Wake Up The Nation’s “Aim High”.

It’s in this musical and emotional postcode that most of Fat Pop’s most stellar moments are to be found. In the days of The Jam and The Style Council, when Weller wanted to find a means of imparting spiritual uplift with gospel directness, he had to borrow songs by other singers – “Move On Up”, “Promised Land” – to do it. Not any more. “Can see the good things in your life?” he asks on “Cobweb / Connections”, as a sweet holding pattern of acoustic downstrokes and handclaps is blown into the blue by a chorus that beseeches its audience to revel in the miracle of their own consciousness. On “In Better Times”, he’s the paternal confidant, trying to make his own experiences meaningful to a lost young soul whose own lack of them has cast them adrift: “What you need is to see/It’s OK to be yourself/And that with belief/The world will do the rest.” He gets to the final verse without shedding a tear. You might not.

Would the teenage Weller have baulked at the sunny universality that beams out from so much of Fat Pop? Possibly, but then so would many of his fans in their younger years. The sense that these are truths earned merely by turning up to the job of being alive on the bad days as well as the good is the heat source of so many of Fat Pop’s greatest moments. To listen to “Glad Times” is to be reminded in an instant that he’s long since found the expressive tools to become the thing he once admired from afar. Listen to the way Weller sings, “We go for days without a word/Without a kiss/Both looking for something that we missed”, and it’s no stretch to imagine Bobby Womack inhabiting the same role, urging his lover to stay strong in the turbulent now so that they can be together later, when better days ensue. The regretful self-interrogations of “Failed” are measured out over a kinetic chug that calls to mind JJ Cale. There’s a palpable ache at play here that echoes the mood of the Wild Wood album: “If everything was different now/How different would I be?/If I could change one thing around/Would that pattern still be complete?”

The Weller of 2021 is happy to mainline his inspirations but stops short of being in thrall to them. To understand how he does that, note the celestial rush of strings that eddies around Weller’s vocals on “Glad Times” and “That Pleasure”. Both arrangements by fêted electronic expeditionary Hannah Peel confer upon these songs a sense of wonder that propels them beyond their constituent parts. If Weller likes your new record, you’ll soon know about it because there’s every chance he’ll invite you to do something on his. If you’re listening to the album’s second song, “True”, for the first time, you’re likely also receiving your introduction to Lia Metcalfe of Liverpool trio The Mysterines. That’s Weller’s daughter Leah on “Shades Of Blue”, who, with her own solo debut out shortly, seems to have been as productive as her dad during lockdown.

And here, as with every album since Wake Up The Nation, is engineer and co-producer Jan “Stan” Kybert. As resident de-clutterer of Weller’s sound-world of some 10 years’ standing, it seems to be Kybert’s presence that allows Weller to blur the boundary between experimentalism and enthusiasm without losing sight of the ultimate objective: to make something that scratches the same itch that first propelled him and his audience into a record shop. This is why he’ll never make the big legacy album or reform his previous bands. To keep that hunger alive, you need to feed it with new inspirations. What you can hear on Fat Pop is the reciprocation of that care. As some promising young songwriter once put it, “What you give is what you get”. That was the theory – 41 years later, here’s the proof.