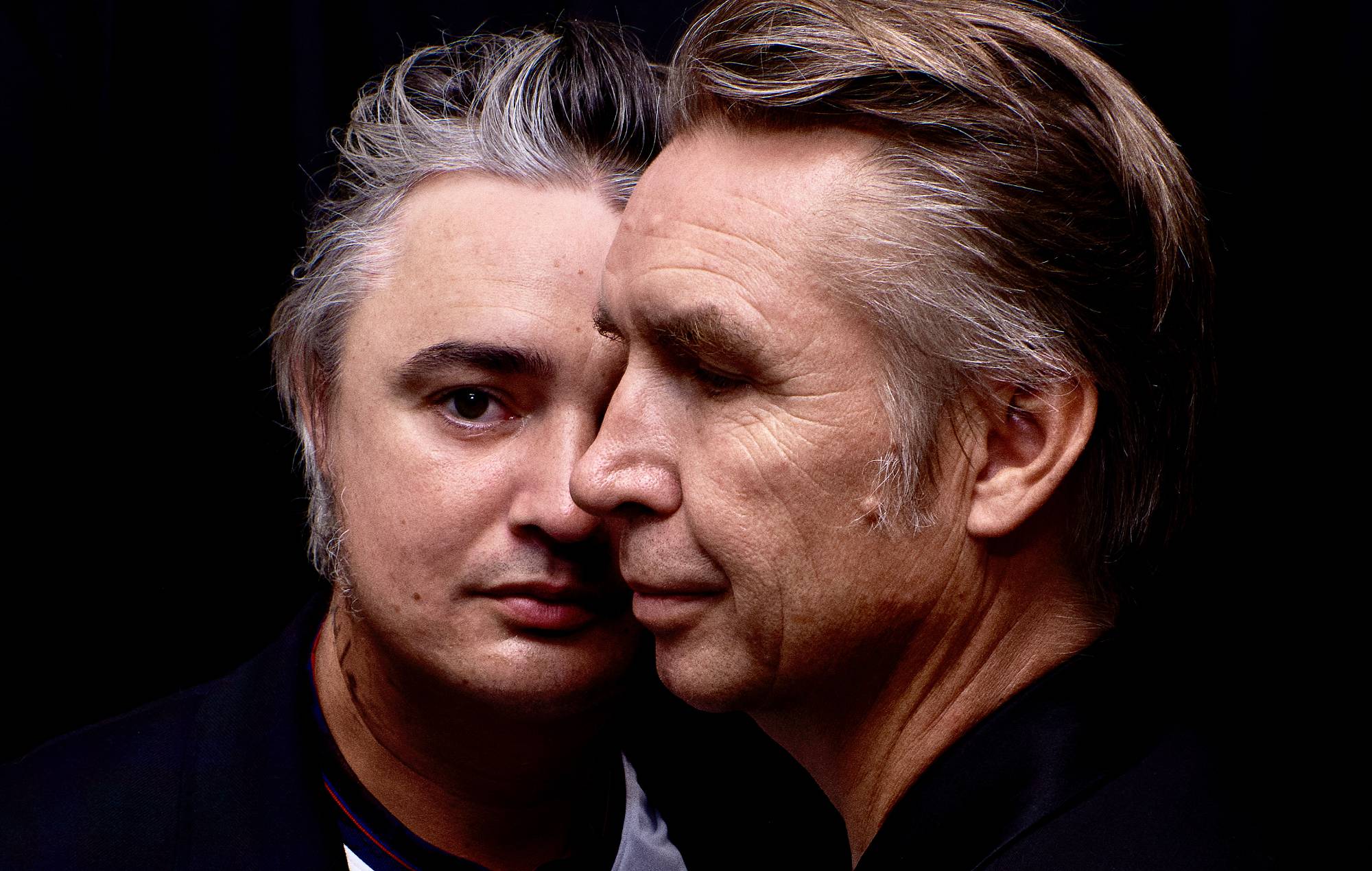 Pete Doherty and collaborator Frédéric Lo have shared the single ‘You Can’t Keep It From Me Forever’ as well as announcing details of their new album ‘The Fantasy Life of Poetry & Crime’. Check it out below, along with our interview with the duo.

Having previously shared the title track, now The Libertines/Babyshambles man and the French musician, musical director, composer, arranger, music producer and singer-songwriter preview their upcoming album (due for release in March) with the summer-ready track ‘You Can’t Keep It From Me Forever’ – which Doherty said was inspired by his now drug-free lifestyle and the pair’s love of classic indie-pop.

“It reminded me a little bit of early Morrissey or some of the early Suede stuff, with an old-school catchy guitar,” Doherty told NME. “I never get bored of singing this song. I’m really going to enjoy singing it live. There’s just something so uplifting about it.”

Asked about the lyrical inspiration, Doherty replied: “I suppose it’s a not-even subconscious yearning for things. I’ve been clean since December 2019, so at the time of writing this I was really white-knuckling it with the drugs and feeling like would only be a matter of time before I went back to it. It hasn’t turned out to be that way, but there was that kind of kicking out at the new way of being clean and feeling like it was temporary. You can apply that to any kind of yearning, but to me it was specifically about that. Time passed, and I’ve managed to somehow keep on the straight and narrow, if it is indeed straight and narrow.

“That’s the honest answer, but it seems silly to give that answer now, though. If it really was such a necessity then I would have just gone out and used. I suppose this is just a smarmy, self-sabotaging sort of thing, but just in the role of a narrator.”

Lo, most notably known for his work with Pony Pony Run Run, Stephan Eicher, Maxime Le Forestier, Christophe Honoré and Alex Beaupain, first met Doherty in the summer of 2020 when he asked him to record a cover for a tribute album to his late collaborator, the acclaimed Frenc singer-songwriter Daniel Darc.

From there, Doherty said that he naturally found himself writing lyrics for pieces of music that Lo had written. Within six months, a whole album had been written during lockdown before being recorded at Cateuil in Étretat in Normandy and Studio Water Music in Paris.

“It was really natural,” Lo told NME. “It was the end of summer in beautiful sun, and we worked in a beautiful house in Normandy. We just kept writing songs until we had a whole album. Peter didn’t want to pay guitar, so I played guitar, bass and keyboard and recorded a French drummer with one of the biggest orchestras in Paris. It really was something special.”

As well as being two years clean, Doherty also recently got married to his Puta Madres bandmate Katia de Vidas. Asked if wedded bliss had added to the upbeat tone of the new material, Doherty told us: “Maybe. I wasn’t married when I was writing the record, but I was in a married state! I was monogamous, very much in love and cocooned and in a relationship. It wasn’t about the highs and lows of sprawling adult romances.”

He continued: “It’s more turning inward. A lot of it was inspired by films and the few years I was in Margate before I ended up in lockdown in Normandy and then completely separated from England and from addiction. I was getting clean. I suppose there was just so much recklessness for such a long period of time and not really caring what anyone else thought that it reverses and all of a sudden you go from having no pressure to being hyper-sensitively aware of this new expectation.

“I think the creative process is like an addiction in itself. I need to write songs, and I’ve never really got to the bottom of it.”

As well as the personal nature of the lyrics, Doherty said he was also inspired by local fables and mythology from his new home of Normandy (such as the story of Arsène Lupin, the gentleman thief) to create what he has described as some of his best work to date.

“I think I tried with all my heart with the lyrics on this album,” he said. “I really saw it as a challenge and a necessity to get them written. I feel like the melodies and the songs that Frederic had for me to write lyrics to were so strong that they needed a huge effort on my part.”

Lo agreed: “For the first tracks we wrote together, we felt something really huge and really strong. We were like forever friends. It was really strange. I loved Peter’s lyrics and the way he writes. It’s really modern and post-modern. I love Oscar Wilde and The Smiths, and Peter’s work is so expressive. I knew when I offered him some tunes that it was good material, so it was like one plus one equals three.

“We were like a songwriting duo, and we loved that because we were talking a lot about The Smiths, The Clash and The Beatles. When Peter screams on this album, it’s a little bit like a John Lennon style, and I’m playing this music like ‘60s pop tunes.”

The duo are planning on playing a gig for ARTE Live on French and German TV before a full tour follows in April and May – having already performed some low-key spontaneous live shows at some local cafes while recording the album in France.

“It’s absolutely essential to play these songs live,” said Doherty. “That’s what I’ve been longing to do since we wrote them. We just need to think about what musicians to use. Frederic did most of the recording with French musicians during various lockdowns, but it looks like we’re now going to merge various elements of The Puta Madres and Babyshambles to get a band together.”

He went on: “It’s really exciting to think about taking these songs on the road. The last Libertines tour, was amazing – I don’t think we’ve ever played so well – but we didn’t put any new songs in there. We’d played some new ideas on the bus and in rehearsals, but we didn’t trail any of them out live. That’s maybe something for the future. For the moment, this is what all my heart has gone into. I need to get these songs heard.”

Speaking of The Libertines, NME also asked Doherty about progress on the long-awaited follow-up to their 2015 album ‘Anthems For Doomed Youth‘. When Pete last spoke to NME about the new material back in 2019, he said it had an eclectic mix of styles in the same vein as The Clash’s ‘Sandinista’.

“That’s still the format that we’re talking about,” Doherty told NME this week of how it’s going. “At the end of the tour we did that ended last month, everyone was really upbeat by the fact that we were all still alive after the various quarantines and John coming and going. We were all really upbeat about the future, so I don’t know how or when it’s going to happen but I think it will.

“‘Sandinista’ still encapsulates it because there are still a lot of ideas. It’s just about getting everyone in a room and getting on with it.”

As well as upcoming shows in South America, The Libertines have also plotted some UK shows to celebrate the 20th anniversary of their debut album ‘Up The Bracket‘. Asked if the new spurt of activity might inspire the band to head into the studio and finish the record, Doherty replied: “I like to think so. There was one song that was getting finished called ‘Mustang’, which was a cracker and definitely up there with the greats. I kept saying, ‘Let’s do it tonight’, but everyone was more keen to hold back. I really hope you get to hear it all this year.”

‘The Fantasy Life Of Poetry & Crime’ will be released on March 18 via Doherty’s own Strap Originals label and is available to pre-order here. Check out the full tracklist below.

‘The Fantasy Life of Poetry & Crime’
‘The Epidemiologist’
‘The Ballad Of.’
‘You Can’t Keep It From Me Forever’
‘Yes I Wear A Mask’
‘Rock & Roll Alchemy’
‘The Monster’
‘Invictus’
‘The Glassblower’
‘Keeping Me On File’
‘Abe Wassenstein’
‘Far From The Madding Crowd’