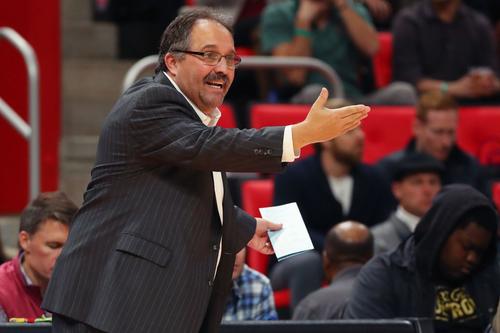 Over the weekend, Dallas Mavericks head coach Rick Carlisle trashed ESPN for publishing a story containing quotes from LaVar Ball, in which LaVar criticized Los Angeles Lakers head coach Luke Walton. But Carlisle isn’t the only NBA coach who is upset with the way ESPN promoted the LaVar Ball article.

RELATED: Steve Kerr Says LaVar Ball Is The “Kardashian Of The NBA”

Detroit Pistons coach Stan Van Gundy is also disgusted with ESPN’s decision to publish comments made by Lonzo’s father. Prior to yesterday’s loss to the Pelicans in New Orleans, Van Gundy said,

“I thought it was a cheap shot and I thought ESPN showed total disrespect,” Van Gundy said Monday at Smoothie King Center, per Vince Ellis  the Detroit Free Press.

“I don’t have a problem with LaVar Ball. He’s a grown man. He can voice whatever opinion he wants. I got a problem with ESPN deciding that’s a story.”

Additionally, Van Gundy contacted the NBA Players Association and NBA commissioner Adam Silver email and explained that he won’t do any ESPN interviews, including in-game interviews, when the Pistons take on the Wizards in an ESPN-televised game on January 19th.

“I’m not meeting with their announcing crew before the game, I’m not doing the in-game interview,” Van Gundy said. “I’m not going to participate in the thing.”

“I’m not denying them access. I’m not kicking them out press conferences. They want extra stuff from us and they’re going to treat an NBA coach with that little respect? Then I’m going to choose not to give them extra access”

“I don’t think there’s anything wrong with you guys criticizing coaches,” Van Gundy said. “You guys cover the team. You’re paid in part to analyze what’s going on. I’ve never had an issue with anybody’s who’s criticized me.”

According to Yahoo Sports, ESPN receives extra access, such as in-game interviews, because it pays the NBA billions dollars to televise games, so if Van Gundy goes through with his ESPN boycott, he’ll likely receive a harsh fine.