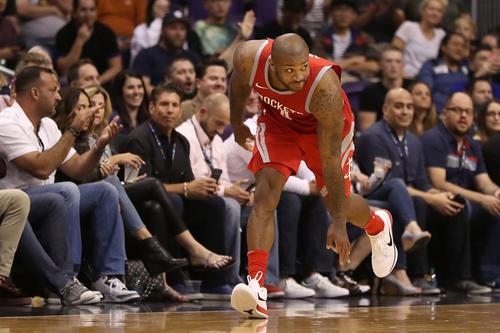 Houston Rockets forward PJ Tucker recently linked up with Complex’s Joe La Puma at Flight Club in New York City for a brand new episode “Sneaker Shopping,” which included some talk about about wearing Yeezys in the NBA, the Jordans he had that Michael Jordan didn’t even know about, and some exclusive samples that Tucker brought with him into the consignment shop.

The 32-year old veteran is one the biggest sneaker collectors in the NBA and a recent tour his locker revealed over two dozen exclusive sneakers including “Zen” Yeezy 1s and “Red October” Nike Air Yeezy 2s to Shawn Marion’s Air Jordan 5 PEs and the “MLK” Nike Kobe 4s, among others.

During his trip to Flight Club he brought out even more exclusive samples such as the UNC Air Jordan 4, Michigan Air Jordan 12, and a couple different Oregon Ducks PEs, including the Ducks AJ4 which he says was the most difficult to get his hands on.

Check out the full episode below, in which Tucker walks out Flight Club with nearly $17,000 worth new sneakers.