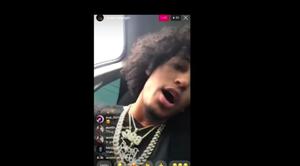 “People don’t really love you or show real support until you dead or in jail.”

Project Youngin’s new video had, to say the least, an unconventional rollout. It began with an Instagram Live video in which he gets shot while counting money in his car and ended with the video for “Thug Souljas” being released with the IG Live video at the beginning, with Youngin narrating: “In life, they say you’re not a legend until you’re gone. People don’t really love you or show real support until you dead or in jail.” Youngin’s statement is a cutting one in the wake of XXXTentacion’s death. The vast majority of shoutouts that X has received from major artists (Kanye, Travis Scott and more) have happened post-shooting. Whatever your opinion on XXXTentacion, it seems in bad taste for everyone to be hopping on the bandwagon after he’s dead, not to mention how too-soon deaths are romanticized in hip-hop and pop culture in general.

So, smart move Project Youngin. He fooled a lot of people, including us at HNHH. Enjoy the video above.