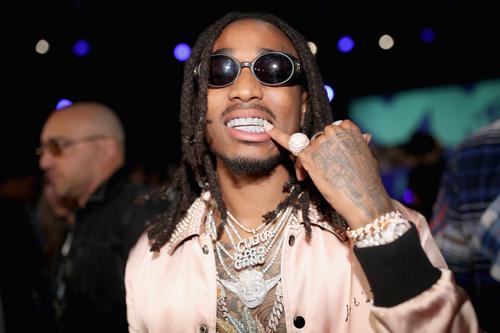 Last year, fans were petitioning to get Quavo to sing the national anthem. While the idea got shot down, Quavo did say he’d be interested in re-writing it in some capacity. The Migos rapper said if he re-wrote the anthem, he’d make it more inclusive for all races and genders. While the idea it is brilliant, there’s yet to be any indications that this is a serious idea to come into fruition. That is until today.

Quavo shared a short clip today in honor MLK Day. The video consists old footage Martin Luther King Jr. rallying. However, the clip itself is dubbed with some new music from Quavo. The rapper captioned the clip, “C U L T U R E N A T I O N A L A N T H E M Happy Bday M L K C U L T U R E I I.” So it may end up on Migos’ highly anticipated forthcoming project.

“Can you see my people pray?/ Take a knee/ We don’t need stripes/ We got bright stars/ We gon’ still fight for that race card,” he sings on the track.

RELATED: Quavo and Takef Gift Mama Huncho With A New Home For Christmas

While this may be the latest piece information pertaining to Culture II, Quavo is still fresh f releasing Huncho Jack, Jack Huncho with Travis Scott. The two them just hit the Jimmy Kimmel stage alongside Takef last week to perform “Eye 2 Eye.”

Check the clip below.