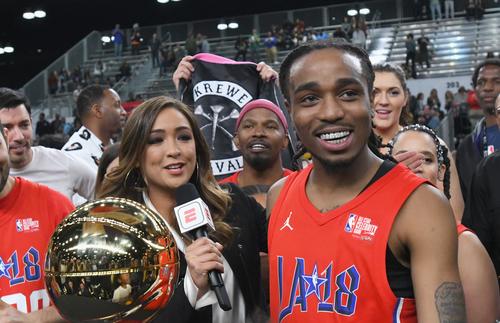 Most you are aware that Migos rapper Quavo is a straight up athlete. From his days playing quarterback to footage him hooping on the court, Quavo has proven over the years that sports come relatively easy to him, and on Friday night that athleticism was on full display again at the Celebrity All-Star game in Los Angeles.

In fact, the Migos rapper was named as the MVP the 2018 Celebrity All-Star game, ending the game as the leading scorer with 19 points and 5 rebounds. He was the star on the LA Clippers squad, who won the game 75-66 against the LA Lakers team.

Quavo had a few highlighted moments throughout the game, including his block on Justin Bieber and his smooth and-one Eurostep layup in the 4th quarter. Although he didn’t complete the 3-point play by missing the free throw, it was a nice play regardless.

Quavo wasn’t the only one player to ball though. Female NBA2KTV host & model, Rachel DeMita, also showed out for the ladies. The former D1 basketball player finished the game with 17 points, but on the losing end.

In case you happened to have missed it, we compiled some the highlights & moments from the Celebrity all-star game (below).