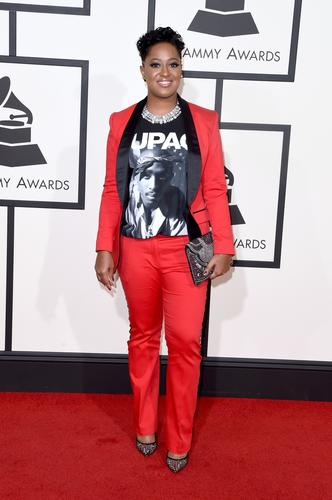 At the end September, Rapsody – born Marlanna Evans – released her second studio album Laila’s Wisdom that has landed her a nomination at this year’s Grammy Awards for Best Rap Album, being the only woman to receive a nod in the category.

Her album release was the biggest move her mostly quiet 2017 aside from a few #JamRocFriday releases such as “O.L.M.S.” and “The Point” featuring Hiatus Kaiyote. In her most recent interview to talk about her success up until now, the 34-year-old humbly chats with legendary Larry King, starting things f on the topic Kendrick Lamar and what makes him such a special artist.

“After I worked with Kendrick on To Pimp A Butterfly, it put me on a platform where he introduced me to a lot people that necessarily weren’t paying attention,” she says. Now that they are both nominated for one the same Grammy Awards, she says it feels good to compete in a healthy way.

When Larry asks the “Power” rapper what makes Kendrick special, she replies: “The honesty in his music, he has no fear and he’s himself. He doesn’t chase anything, but what he sees in the mirror, I think that’s what makes him special.”

Rapsody explains how they met back in 2011 as Kendrick was a fan her producer 9th Wonder, and they were a fan each other.

RELATED: Rapsody Hits Up A Wild House Party In Her New Video For “Sassy”

Watch the full clip below along with other snippets where she talks about hip-hop in the Donald Trump era and being the only woman nominated for a Best Rap Album.