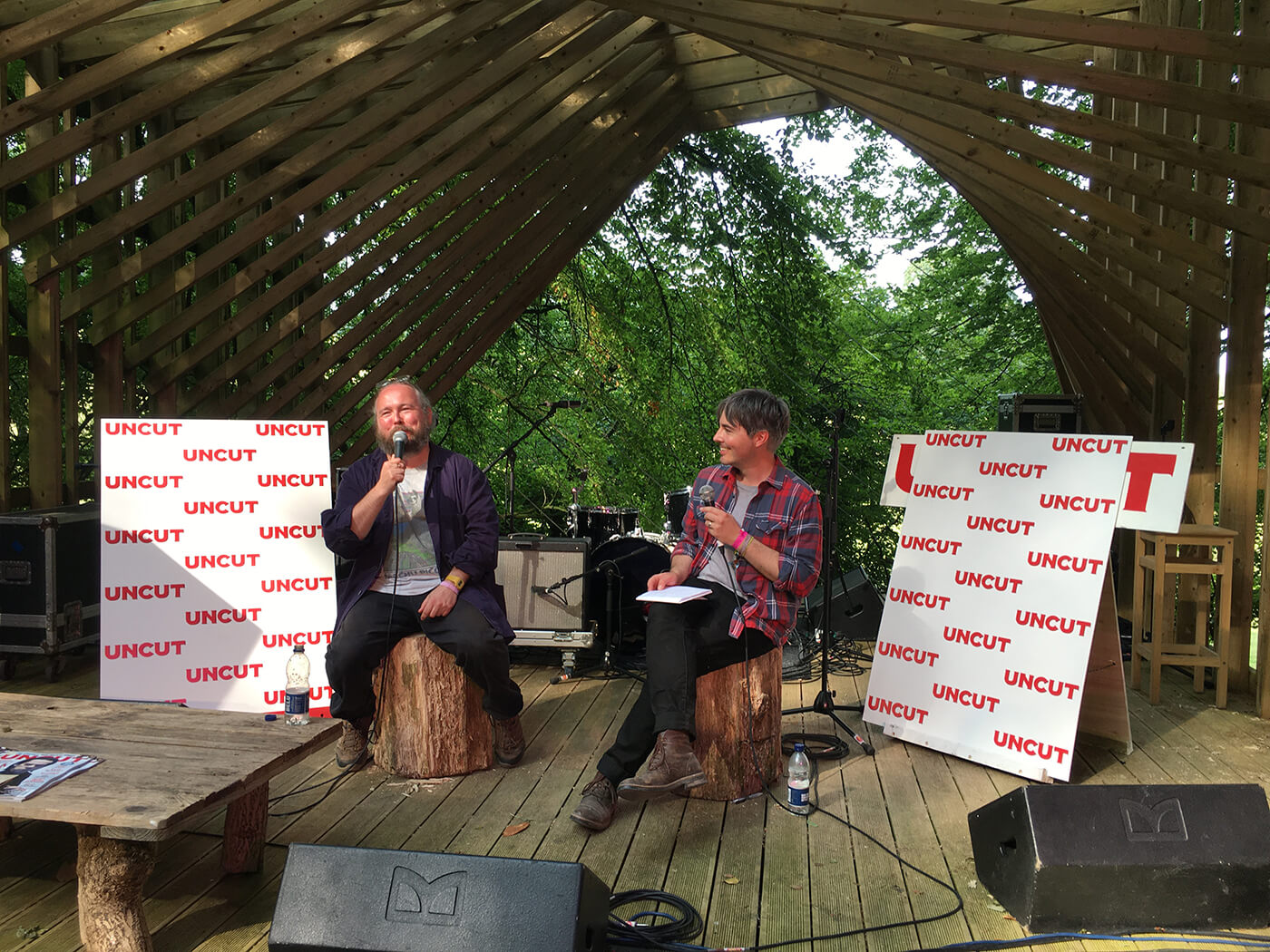 “I thought Q&A stood for Quiche & Apples,” says Richard Dawson. “I thought I was gonna get fed.”

Just one insight into the workings of Dawson’s brilliantly warped worldview, in a discussion packed with plenty. Over 40 minutes in conversation with Uncut’s Tom Pinnock the avant folk figurehead behind Hen Ogledd, Eyeballs and one of the UK’s most Beefheart-like solo careers touches on his childhood love of the feel of warm chips on his testicles. His idyllic rural life spent wild swimming with seals in the Tyne. His thoughts on golf: “It’s nice putting a ball in a hole, but on such a large scale it’s absurd.”

Even the chat itself, before a large and self-confessed “lovely” audience, has what Dawson describes as “a carefully planned arc” from insecurity to delight. It begins in concerned tones, with Dawson yelling “I’m worried!” ahead of his solo set at the festival tonight and admitting that he was relieved when Glastonbury was cancelled as he was set to get one of the televised slots. “Can you imagine all the horrible stuff we’d have got on Twitter?” he says. “‘Who’s this daft bloke who can’t sing in tune’ etcetera.”

His fears are gradually allayed over a discussion ranging from troubled teenage years and twenties, spent with “one foot in the void” but driving his art, to the creation of his “comfort group” Hen Ogledd and his recent assaults on the realm of accessible pop music. “I wanted it to be the most pop songs I could write but then with lyrics that did not fit into that,” he says of 2019’s solo album 2020, “so hopefully it would make this awkward feeling. We’re not neat, structured humans, we’re messy. So I want the lyrics not to fit.”

Along the way some of the most fascinating thoughts on songwriting and lyrical exploration are unravelled. “Does music exist?”, asks an audience member, a very Dawson sort of enquiry. “Energy is always transferring,” he explains. “It’s quite an amazing bloom of energy. I still feel like it’s a living thing, a very ancient… you can tell the difference between when you’ve really made it, or constructed it, and when it just appears and lands in the room. That feels like something else and it’s your job to hone it down. It does feel like it’s some kind of spirit…a conscious ancient thing that makes itself known and you’re its servant, you have to do right by it or you’re doing it disrespect.”

And the man who recently envisioned humanity’s first intergalactic cruise on Hen Ogledd’s “Crimson Star” is, on future material, going even further out. “I was thinking about these ideas about simulation theory, this this is all a computer simulation,” he says of the “futuristic” forthcoming solo album that will act as an (unintentional) third part in a past-present-future trilogy following 2017’s Peasant and 2020. “That sort of stuff is in there a bit but also thinking about block-time…that all moments are happening simultaneously, we just travel through it.”

More immediate, he reveals, is an album due to be announced next week (“don’t tell anyone”) with experimental Finnish rockers Circle, which Dawson describes as “a heavy metal record about plants” which sprang from an unexpected collaboration for a Helsinki festival show. “It became clear they wanted me to play the whole set with three or four songs that we didn’t have,” he explains. “We spent two and a half days whipping it into shape and then I’m onstage at the biggest gig I’ve ever played with my favourite band…it’s totally magic.” No doubt we’ll like them apples.