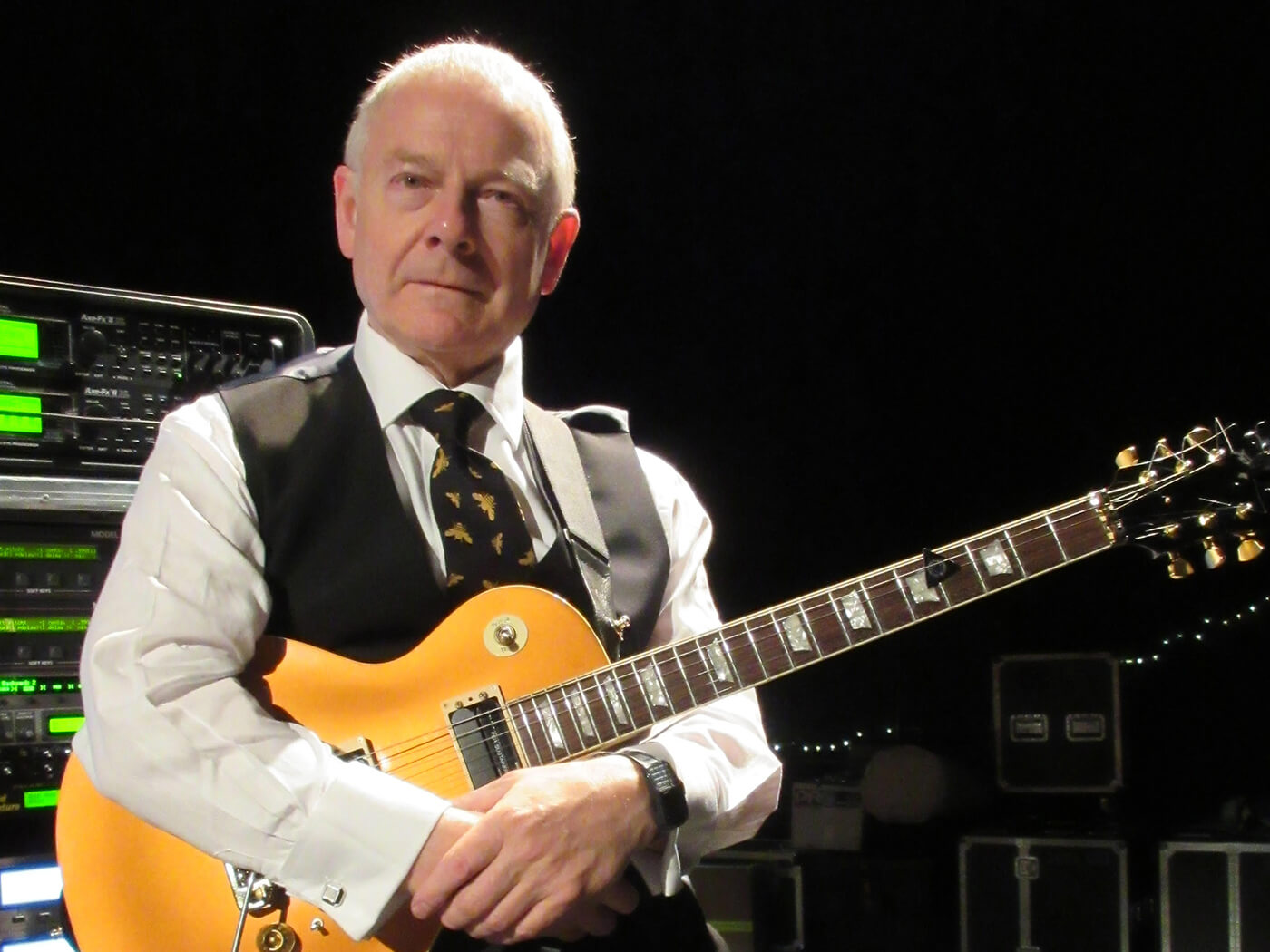 When Robert Fripp’s Music For Quiet Moments started to appear with relatively little fanfare in May 2020, as a series of weekly uploads to YouTube and streaming services, their overall effect was one of balm. Moving through the digital ether, Fripp’s ambient soundscapes slowly drifted their way through a collective psychological environment grappling with the uncertainty of pandemic times. The series unfolded over a year, 52 weekly entries, each offering another aspect of an ever-changing same: Fripp performing live in various contexts, quietly testing out the possibilities afforded to him by music that drops the pretense of narrative and lets itself just be.

He has, of course, been exploring this terrain for some time now, going way back to the early 1970s, when a series of encounters with glam polymath Brian Eno led to two albums, (No Pussyfooting) and Evening Star, where Fripp’s guitar wove a web within Eno’s tape -delay systems. Decades later, Eno would marvel at Fripp’s seemingly preternatural grasp of the nuances of the system: “It’s very easy to get stuck in a kind of drone rut, but he was clever enough to shift out of one mode to another.” These experiences inspired Fripp to develop Frippertronics, a method that hotwired two reel-to-reel tape decks, so they were able to function as a real-time looping system.

Frippertronics became part of Fripp’s extended rig, making its first appearance on record on his 1979 solo album Exposure; he’d subsequently explore the modified terrain offered by this process across his 1980s solo albums and beyond. In the 1990s, digital technology afforded Fripp the chance to update Frippertronics and build a more mutable and expansive kit, now known as Soundscaping. Since then, the soundscape has become a fundamental part of Fripp’s musical armoury: leading away from the tough, abstruse complexity of King Crimson, the soundscapes are remarkably pliant and sensual. Their capacity to evoke an ‘eternal now’, though, always somehow connects Fripp back to the source, those early looping performances and recordings with Eno.

Most recently, the soundscapes have been used to establish mood at King Crimson shows: Fripp describes them as “play-on music, to set up a sonic liminal zone as members of the audience come in from the outside world, the liminal zone before the performance begins. The soundscapes describe and define the liminal zone.” Their reflective melancholy and sutured stasis are something Fripp finds particularly useful for calling the audience into the collective experience: for him, soundscaping “defines a sacred space where something may happen”.

It’s no surprise, then, that he’s also performed the soundscapes on tours of churches in the UK and Estonia: there’s something very powerful about the meditative possibilities in soundscaping, a capacity to capture manifold emotional resonance, drawn from the air of the everyday. If they risk being alienating in certain contexts – and Fripp has talked about the “antipathy” the performances have sometimes received, the way audiences have reacted negatively to the soundscapes as they’ve unfolded in real time and space – they seem particularly perfect for spaces of worship and mourning. And much like Eno’s Music For Airports, what could, on first encounter, appear to be pure process, an abstract navigation of the parameters of a set of conditions, opens up during intensive listening as something, at times, profoundly moving. It’s a classic unanswered, perhaps unanswerable, question: how can the ‘unemotional’ in process be so emotional in outcome?

That’s not to say that Fripp is ‘removed’ from the soundscapes, in particular these Quiet Moments – he’s spoken previously of them being both “deeply personal, yet utterly impersonal”. That seeming paradox is at the crux of the 52 performances in this boxset, all but one of which are drawn from performances that took place between 2004 and 2009, either as dedicated soundscape and churchscape shows, or as part of a larger lineup (with Porcupine Tree or his G3 with Steve Vai and Joe Satriani, for example). What’s particularly surprising about hearing these Quiet Moments collected in an eight-disc box, though, is their consistency, both in quality and in tone.

The soundscapes tend toward permutation: Fripp tends to locate a clutch of tones and let them sigh across the stereo spectrum, adding detail and detour as best fits the moment. Echoing the earlier comment from Eno, while there are drones in abundance here, Fripp never gets stuck in the one spot: as a tonal bed, drones function to gather the listener’s energies, but it’s in the details, the pirouetting guitar figures that dot the landscape of the three-part “A Move Inside” from Asheville, for example, that the magic and deep concentration of the soundscapes becomes apparent. While they often map broadly similar terrain, Fripp is careful to give each soundscape its own space; liminal they may be, but there is something distinctive in each of these quiescent miniatures.

Indeed, if part two of “A Move Inside” feels like classic soundscaping – a music-box ballerina dusting glitter through the air – the third part is altogether more hesitant and shadier, stealthily encroaching into our listening orbit, testing the water, before one of Fripp’s classic sounds – a plastic ray-gun buzz, the guitar singing as though it’s conducting pure electricity – guides the piece in another direction entirely. In moments like this, and similar driftworks, like the 2007 “Pastorale” from Mendoza, or “Time Stands Still” from Udine in 2006, Music For Quiet Moments touches something profound in both its questing tenor and its intimacy, and while the music works well enough as ambience, it’s certainly sturdy enough for prolonged focus and immersion.

If anything feels like the ‘heart’ of Music For Quiet Moments, it’s the various elegies that Fripp has dotted throughout the collection. These draw from many performances – from Rome, Hannover, Nashville, and Paris – and are particularly elegant and moving. The Rome performance, from June 20, 2006, is split across two discs – one excerpt nestles among several other pieces and is remarkable for its lambent flicker, a child’s clutch of notes held together, quietly, patiently, cradled by Fripp as though they’re one step away from fragmenting and falling away. Three more excerpts appear on the following disc, in order, and they begin in a similar vein, but move into deep lung-bursts of cello-like drone, and a lovely, denuded spot of playing, during “Elegy Pt 2”, where Fripp sounds almost like ‘Venusian blues’ guitarist Loren Connors woven through an Echoplex.

The 45-minute “Elegy” from Paris – performed on September 22, 2015 and existing outside the timeline of most of the other soundscapes – is a tour de force, and completely warrants being isolated on its own disc. The piece’s shifting ground, its movement in and out of earshot, its tessellation of tonality, recalls the sacred sadness of Estonian composer Arvo Pärt; a lovingly melancholy embrace, the Paris “Elegy” repeatedly retreats into near silence, as if to renew its reserves, or to find its meditative centre, from which it radiates anew every time. Like much of Music For Quiet Moments, the Paris “Elegy” is all about transformation, about unlocking the immense within the intimate. And at the core of all this music, fundamental to both its existence and its dissemination, is empathy and care, and a kind of everyday, yet profound, wonderment.