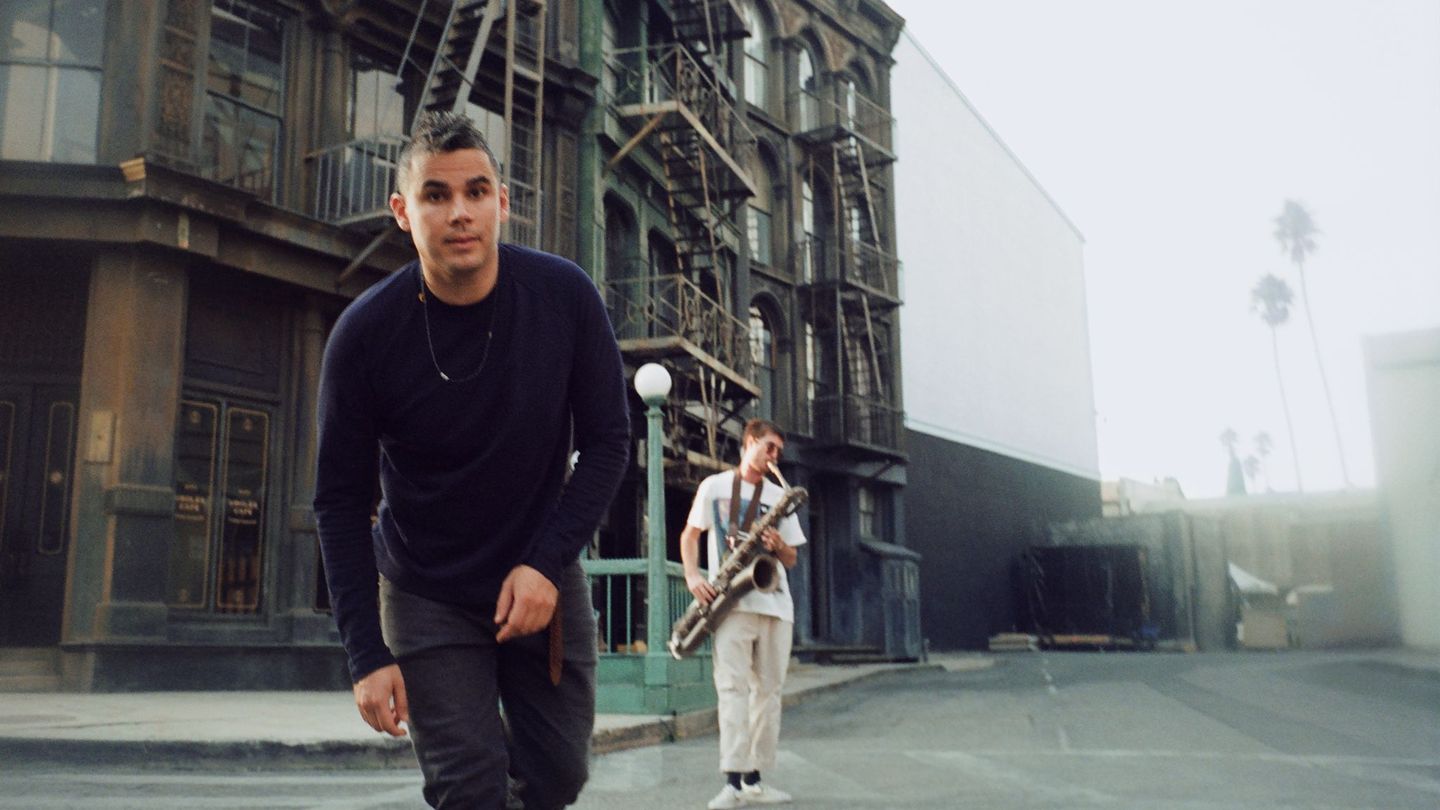 Rostam Batmanglij is working on some Lucinda Williams covers. In April, he shared a teaser of his progress so far, including with pal and in-demand horn blower Henry Solomon laying down a baritone saxophone part over a shuffling beat. His fandom of the country-music legend is well documented — “hey siri, google why is Lucinda Williams’ music queer even though she is not,” he tweeted in March — but on a recent Zoom call from Los Angeles, he can’t say what these latest tracks will amount to, not yet.

“I have an idea that’s a little bit of a secret,” he says, standing before a bright wall of windows. “I have this idea to do something that in the last few months has become the standard way that pop albums are released, which is…,” he trails off. “I don’t want to ruin the surprise, but it’s this thing that the biggest people in pop are doing across the board, and I thought it would be fun to try to model my release after this new standard, to use a term, of art.”

Looking casual in a black tank top, he ties it all together, kind of: “The Lucinda Williams covers may be involved — may or may not be.”

What might be taken as blowing smoke from a more trollish, less credentialed artist comes across as Rostam doing the work in real time and being careful not to share until the job is done. In fact, he’s always working. On the dozen-plus albums the frequent collaborator has worked on as a performer or a studio mind (or both), he’s played piano, organ, bell piano, harpsichord, acoustic and electric guitar, banjo, synthesizer, bass, mandolin, light percussion, and whatever other strings or keys he can find. He doesn’t play the saxophone, hence the help. But he knows enough to trust his own ears.

“I have really strong opinions about sax in songs,” he tells MTV News. His latest album as a solo artist, Changephobia (out today), is dripping with brassy sax solos, courtesy of Solomon. This won’t shock anyone who’s followed Rostam’s decade-long career from Vampire Weekend linchpin to in-demand pop producer for Carly Rae Jepsen and Frank Ocean, but Changephobia opts out of arena maximalism in favor of a lithe, airy mood. It’s a reflection of his own taste. “There are some songs where I think the sax is amazing, and there are other times when I think it is corny and terrible. And you know what? I feel the same way about strings.”

Classical elements have long been fertile ground for the former music student. Early Vampire Weekend songs like “M79” and “Taxi Cab” sprang to three-dimensional life thanks to his string arrangements, and 2016’s I Had a Dream That You Were Mine with crooner Hamilton Leithauser found its strength in swooning chamber-pop moments. But as his sensibilities evolved, Rostam likewise expanded his sonic toolkit. His moody yet bright sound has earned him Grammy recognition for Haim’s Women in Music Pt. III, which he co-produced, and acclaim for Immunity, the debut from emerging vocalist Clairo that merged her lo-fi roots with Rostam’s own synth-pop experiments.

As a solo artist, he’s melded the classical influences that marked his early career with folk music and dreamy pop. That potent combination yielded a warm debut in 2017’s Half-Light, and when he set out to make follow-up Changephobia, he sought a looser, jazzier sound. Cue the saxophone.

While referencing classical music has offered him “some secret language that you could speak with” over a 15-year career so far, Rostam is now picking up brassier lingo. “I guess the reason that I wanted to make this record where the sax was like a character in the ensemble is because I do have strong opinions about the way I want sax to sound on records and what kinds of things I want sax to reference.”

Therefore, Solomon’s saxophone feels like a second voice throughout Changephobia, a duetter who reappears to guide Rostam’s sedate rhythms, as on lead single “Unfold You,” or adding an ethereal gauze to moony closer “Starlight.” Solomon also lit up Haim’s “Summer Girl” with its mellow homage to Lou Reed in 2019. That song’s atmosphere — California breezy even in the face of adversity — characterizes much of Changephobia. As Rostam sings about climate change, miscommunication, and escape, he seeks out organic sounds, a strategic move aimed at making them easier to translate in a live setting without losing any of their polish. “It’s this kind of insane thing of trying to make a live performance that is as big as the recording,” Rostam says. “I want [the songs] to be completely freewheeling, to have no computers involved, everything loose and just untamed, I guess, and unchained.”

Still, some of Changephobia’s essential moments are devoid of wind entirely. Euphoric single “4Runner” rushes with forward propulsion, spinning a yarn of fizzy love in its amber guitar lines. “I was more interested in what I wanted to say lyrically than how I wanted the melody to flow,” Rostam says. “From the Back of a Cab” similarly feels like a sunset personified, thanks to a stylish video with gentle cameos from Charli XCX, Haim, Wallows, and more. On “To Communicate,” one of its most cathartic tracks, Rostam sings a mouthful for a pop song — “You said a discrepancy at the start may account for a conflict between us” — that came to him fully formed while sitting at the piano.

“I find a lot of times the deepest songs that I write are when I turn my brain off and just allow it to drive, or allow this little character in the back of my brain to be behind the wheel,” he says. “I’ve grown a lot in the last five years. I feel like I’ve become wiser, and it was somewhat hard-fought. It wasn’t easy.”

This wisdom allows Changephobia to exist both as a vibe and as a statement ready for a close read. On a more casual listen, you’ll pick up subtle tempo changes and fun experiments, like the “drum-and-bass song that turns into a grunge song” called “Kinney” and the cool evening beat of “Bio18,” which makes it one of the prettiest songs he’s ever penned. With headphones in, meanwhile, Rostam’s words can knock the breath out of you. “I didn’t want to stumble on a question / That might upset the structure of the world in which we lived in,” he confesses on the searching title track. To punctuate “Next Thing,” he keeps it simple: “Some pain is OK.”

“I think I’m the kind of songwriter who’s sort of afraid of writing a song that’s just about one thing,” he says. It’s the kind of thought you’d expect from a true collaborator, one whose latest project shines in part because of a friend’s shining saxophone. He’s given Solomon his due by including his solos in the musical transcription that comes inside the album’s vinyl booklet. “I studied music in college, and even before that, I learned how to notate music when I was a really little kid. So to me, I think it’s just cool. It’s part of the art,” he says. “You can read the lyrics, you can follow along to the lyrics, you can read the sax solos, and follow along to the sax solos.”

You can also learn how to play his big-throated folk song “In a River,” courtesy of a YouTube tutorial made by Rostam himself. It’s a three-minute mandolin strumming lesson that even dips into suspended chords without getting bogged down in clunky theory explanations. The entire clip breezes by, suggesting Rostam’s abilities lie in both demystifying the creation process and making people feel a bit more connected to it. “Some people might be like, ‘Oh, that’s so stupid, and dorky, and it’s high-minded,’ or something,” he says. “But I don’t feel that.” How could he? He’s just doing the work.