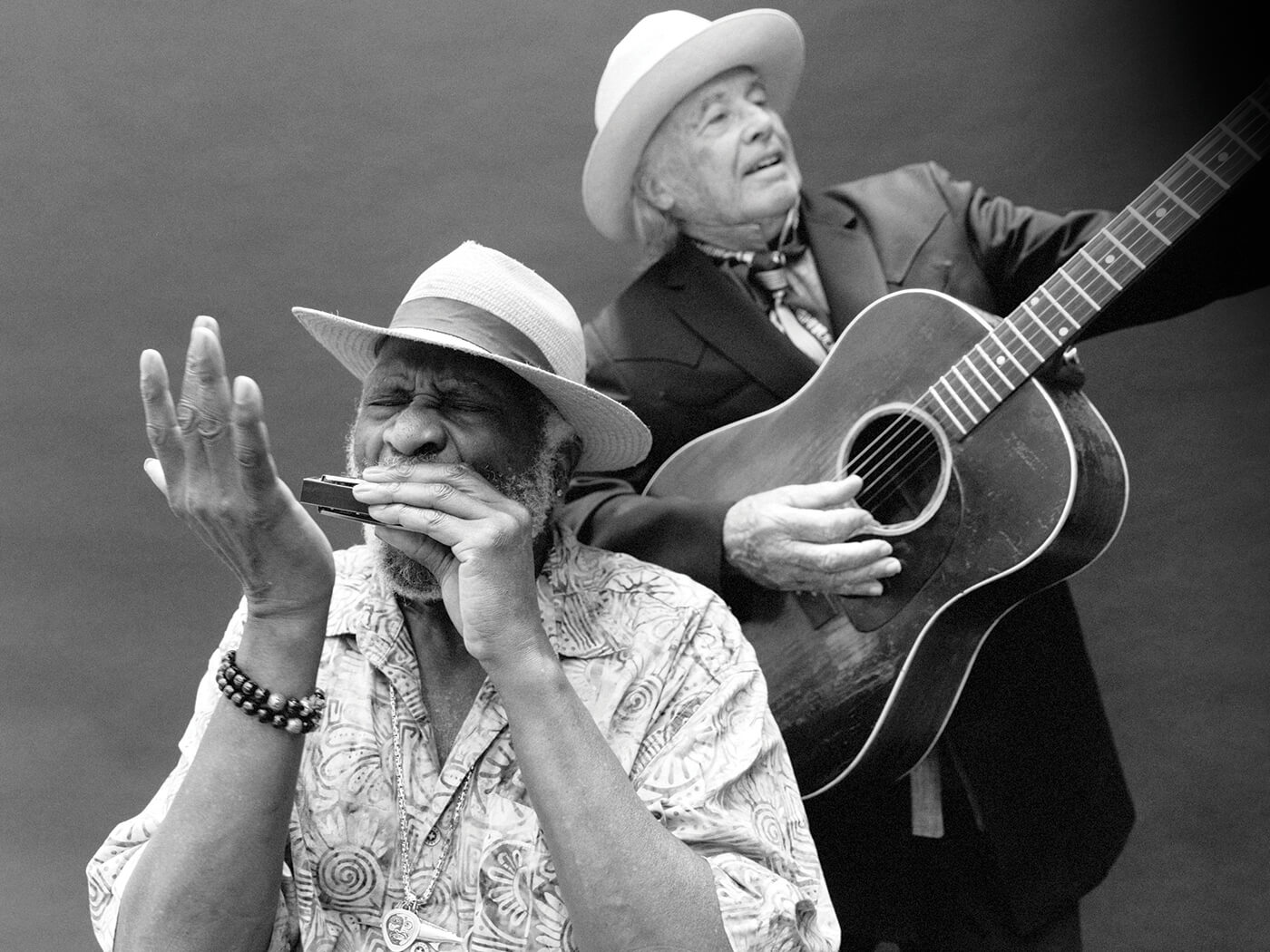 Ry Cooder and Taj Mahal – Get On Board

The original Get On Board by blues icons Terry and McGhee was a 10” album released on the Folkways label in 1952, the eventual fruits of a partnership formed a decade earlier and which thrived well into the ’60s. The record’s contents were key texts in the early musical education of both Mahal and Cooder during their teenage years in California, and a shared love when both were members of The Rising Sons (although the band’s only album, recorded in ’65, went unreleased for more than quarter of a century).

However, this second set to bear the title is far from a straight tribute or reworking of the first. Just three of the nine songs from the old masters’ release feature here, and a wider net is cast to fill the remaining berths with material from the subsequent Terry/McGhee catalogue, found on arguably better-known albums the duo recorded as their profile became more visible on the burgeoning club and coffee house scene of the late ’50s and early ’60s.

The original three that do make the cut act as a template for the rest of the album, notably the shuffling prisoner lament “The Midnight Special” and the jaunty worksong “Pick A Bale Of Cotton”. The former is, in some respects, just as informed by the version Creedence Clearwater Revival recorded in ’69 as it is the Sonny/Brownie reading, imbued with a seam of solid rock’n’roll perhaps more palatable to a wider, mainstream listenership. Meanwhile, the latter is gloriously representative of the relaxed spontaneity that permeates the entire project, complete with chuckling when the players inadvertently step on each other’s vocal lines. There’s no doubting that both Mahal and Cooder are learned purists when it comes to the rich history of American music, and throughout Get On Board there’s a tangible sense of two old friends having the time of their lives, in the throes of a loose, laconic labour of love.

The recordings are of course not as primitive as the originals, with their early studio technology that left Terry and McGhee with little opportunity for sonic exploration, but here Cooder’s stripped-back production is essential in recreating an atmosphere of bygone times. The spacious echoes provide an aural backdrop on which every coarse rasp of Mahal’s voice, the intermittent scratches of Cooder’s fingers sliding up and down strings on a fretboard, and fizzy reverb of son Joachim’s snare drum paint effortlessly evocative pictures.

Scholars of the ’52 Folkways release have praised it for its success in capturing lightning in a bottle, for its authentic depiction of the subtle shifts in folk and blues during the immediate post-war years, and there’s a feeling that Cooder especially strives to honour that lightning. There are times when the album sounds for all the world like an impromptu jam in a rural shack, rather than the end result of sessions in a state-of-the-art facility.

It comes as little surprise to learn that all 11 tracks were done and dusted in the space of three short days last July, Cooder employing the similar fast-work guerrilla tactics of some of his own solo recordings from relatively recent times, in particular 2007’s My Name Is Buddy and the following year’s I, Flathead. There are, unavoidably, a few overdubs, allowing Cooder to embellish his acoustic guitar with flourishes of mandolin or banjo, while his signature electric slide makes occasional, welcome appearances. These amped-up elements bring extra texture to the thuggish blues of “My Baby Done Changed The Lock On The Door”, suggesting an extension of the wronged-man rage of Mahal’s woe-is-me vocal. It’s more intricate than anything McGhee’s own guitar served up back in the day, yet it’s nonetheless entirely in keeping with the sparser rudiments of the blues form.

Mahal’s harmonica, on the other hand, tends to stay respectfully closer to the bursts of melody for which Terry was famed; near note-for-note re-enactments on the prairie balladry of “What A Beautiful City” and the hillbilly toe-tapper “Packing Up Getting Ready To Go”.

It’s all over way too soon, though; 45 minutes of music that seems to fly by in a fraction of the time, such is the charm and allure of both the songs and the passion with which its makers perform them. “I Shall Not Be Moved” (the third of the songs from the original album) brings proceedings to a robust, testifying close, as the curtain falls on a record that acts as both a good-humour history lesson and a rousing party-starter for future generations to discover.