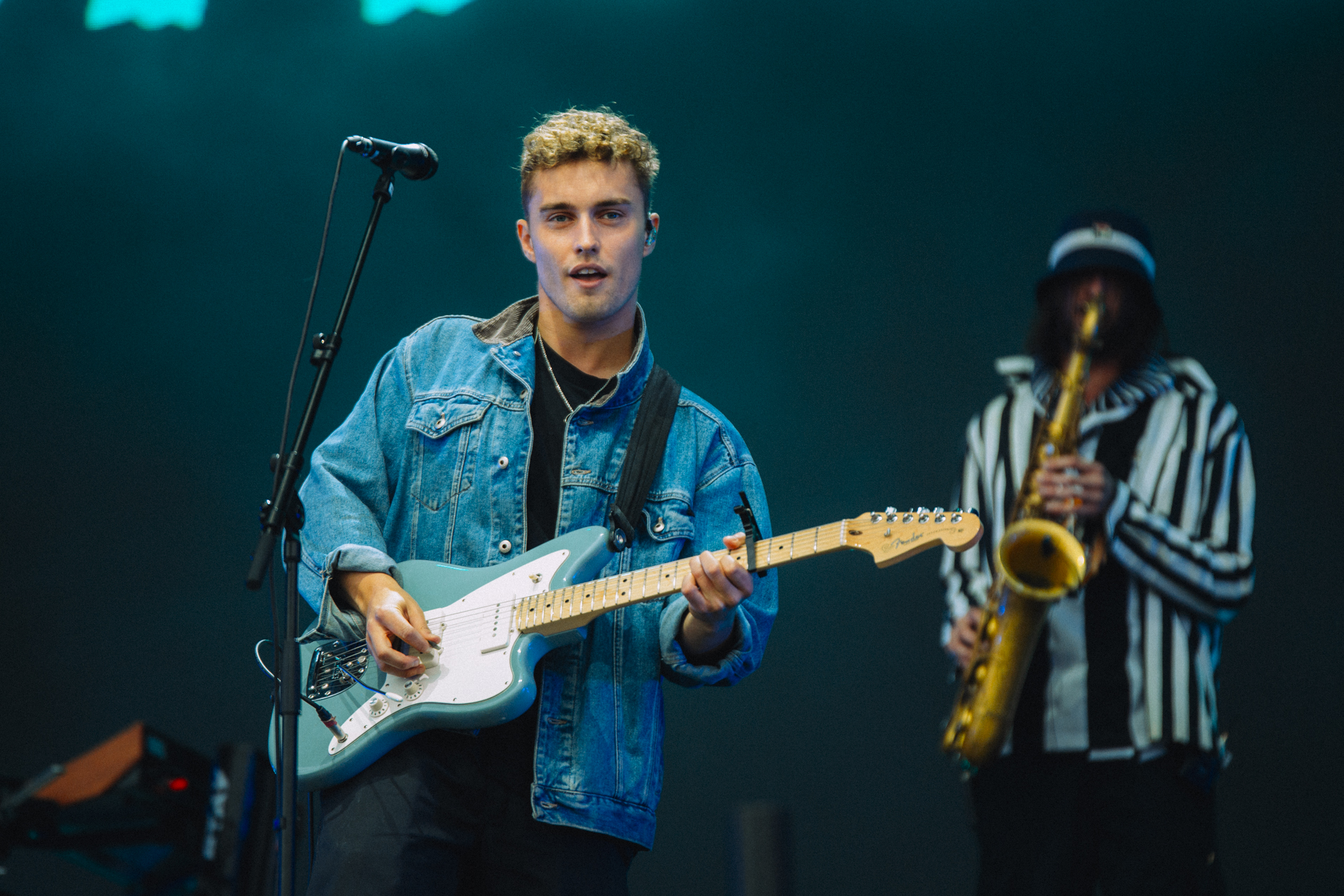 Sam Fender has released ‘Get You Down’, the latest single from his upcoming new album, ‘Seventeen Going Under’. Check it out below, along with our interview with Fender discussing the track – and the possibility of a punk side project.

The North Shields BRIT Award-winner’s latest release, which follows the title track from his forthcoming album and recent single ‘Aye’, is a “heart-churning” stadium record that sees Fender tackle insecurity in relationships.

“The whole album is about insecurity and growing up,” Fender told NME backstage at last month’s Boardmasters Festival. “It’s about the insecurities you carry from being a kid, my feelings of abandonment and the self-loathing I’ve accumulated over the years, all while being a charismatic kid – a canny chanter, but sad.

“‘Get You Down’ is one of the first songs that looks at how that insecurity tore apart my relationships, and my last relationship in particular.”

Recorded back in 2019, Fender described the track as “a fucking absolute heart-churner”. However, he said his record label weren’t sure about it at first.

“It was one of my favourites right from the start,” he explained. “But the label were going, ‘We think you might just be trying to write a single.’ Then by the time we recorded all of the songs for the album, Richard [O’Donovan, A&R at Polydor Records] turned around and said: ‘I was completely wrong. That song is absolutely incredible.’”

Fender added: “I think it’s one of those records that’s kinda like a slow burner, but it’s a monster.”

Predicting how his fans will take to the new track, Fender told NME that he thinks it’ll be a big festival record, comparing it ‘The Borders’, a fan favourite from debut album, ‘Hypersonic Missiles’.

“It’s kinda like ‘The Borders’,” he said. “The fans love things like that, and they love ‘Seventeen Going Under’. It’s a great follow-up to ‘Seventeen’; it’s a really good festival song.”

Announced back in July, ‘Seventeen Going Under’ is set to be released on October 8 via Polydor Records. Fender explained how he feels about the album since he’s had plenty of time to reflect on its content.

“When I came to the end of making it, I listened to it and it’s the most proud I’ve been of anything that I’ve ever made,” he told NME. “I think this is my statement record.”

Asked if there was anything he would change considering the length of time he’s had to sit with the final version, Fender pointed to just one thing: a missing harmonica on the album’s final track, ‘The Dying Light’.

“There’s only one thing I regret not doing that I now can’t change,” he explained. “I fancied putting a harmonica on the last song on the album. I just thought it would be lush to have a little harmonica in the distance, but then it probably would have sounded too identical to [Bruce] Springsteen. It’s very Springsteen and sort of sounds like ‘Thunder Road’.”

“There is a harmonica on one of the deluxe tracks,” he continued. “So it doesn’t lack harmonicas. I’ve just started learning to play them and I’m getting quite good at it. I really love playing them.”

Fender also told us how he wrote 60 songs for the album which he plans on “pumping out” in a variety of formats. “The standard version of the album features 11 songs,” he explained. “There’s 17 on the deluxe, you know, because of the title. Then there’s gonna be b-sides with every single as well.”

One of those b-sides was the recently released ‘Howdon Aldi Death Queue’, which Fender said was just meant to be a joke. “I wrote it in about 30 seconds,” he revealed. “Normally, I write my lyrics first but this time I just kinda mouthed the melody and then the lyrics came soon after.”

Recorded in Ireland, Fender said the track – the video for which features cameos from Robson Green and Tom Brittney – was done in one take. “The take that you hear is the first take we hit,” he recalled. “That’s the vocal in one take as well. There was no click. It was completely free and live. And it sounds so fucking huge.”

The rapid-fire, punk-infused track came about after Fender saw a group of old people queuing for a local Aldi supermarket during the coronavirus pandemic. The title was the brainchild of Rich Oliver, a fellow Geordie who was a regular at Fender’s early gigs; he was always telling Fender that he should “stop doing nice records” and make some punk.

Oliver posted the title on Facebook with the caption: “Great band name”. Fender saw it and thought it would make a better song title and proceeded to call Oliver and ask his permission to use it.

Fender also had another idea for the title. “My whole plan was to do a whole punk band side project on the sly that nobody would know about,” he revealed. “I’d do it like the Gorillaz, where nobody knows who it is, and call the band Howdon Aldi Death Queue. I still might do it.”

Fender is currently in the middle of a UK headline tour, which kicked off in Stockton last month and has so far seen him perform in Bristol and Birmingham; he’s also done a few festivals including Boardmasters and Reading & Leeds.

Happy to be touring again after 18 months following lockdown, Fender said he and the rest of the band got a little emotional after their first gig back. “We were jumping all over the place,” he said, recalling the moment they first came off stage in Stockton. “We were cuddling friends, cuddling each other. We’re all a little bit soft really.”

After grabbing a few takeaway beers, the celebrations continued at his. “Everyone came back to mine,” he continued. “We had a right fucking knees up and it was great.”

Meanwhile, Fender announced on Monday (September 6) that he had to postpone a pair of Glasgow gigs in order for him and his band to get tested for COVID-19.

The singer’s two shows were scheduled to take place at Barrowlands on 7-8 September as part of his UK tour. However, in a post on his Instagram Story, Fender said some of his touring crew members had been experiencing a heavy cough. He went on to say that he plans to still make an appearance at Glasgow’s TRNSMT festival later this week.