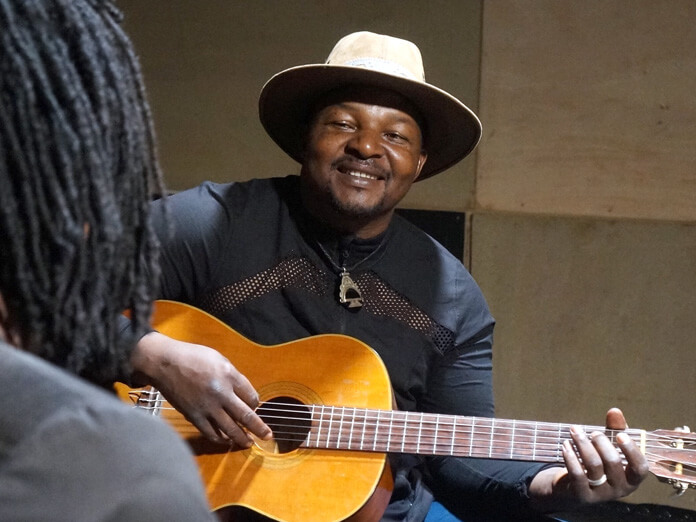 Samba Touré comes from a centuries-old “oral tradition”. It’s a phrase we often use about African music without perhaps comprehending its full meaning. If we think about it at all, we assume it refers to musical skills and styles passed on in griot-fashion from generation to generation, with an accompanying set of ancestral folk tales that contain a semi-mythical tribal history of great kings and brave warriors.

All of which is true and is reflected on Binga, Touré’s sixth solo album since his international debut a dozen years ago. Yet the reasons why African music to this day remains a predominantly oral tradition run deeper. Growing up in a remote village in northern Mali on the edge of the Sahara, Touré never went to school. “I can’t read easily, just a few words, so I’ve never read a book in my life,” he admits.

The same is true for most of his domestic audience and it’s key to an understanding of the significance of artists such as Touré in West African societies. As he tells Uncut, music in Mali is far more than merely entertainment. You can let your hair down and dance to it, of course. But songs are also one of the main conduits for information and education, fulfilling the functions of a newspaper or social media in a country in which two-thirds of the population is illiterate.

The point was brought home to this reviewer some years ago at a festival in Bamako. A hip-hop trio were on
stage and I asked what they were rapping about. It turned out they were making a public service announcement.
“They’re telling the youth that the streets are filthy and they should pick up the litter,” came the answer. One can’t recall NWA spearheading a ‘Keep Compton Tidy’ campaign.

On Binga we find Touré singing in his native Songhoy tongue about the malfunctioning of the school system (“Atahar”), the damage mankind is wreaking upon the natural world (“Adounya”), the rural poverty of his old village (“Sambamila”) and urging Malian youth against leaving family and friends behind in search of an illusory better life abroad (“Fondo”). Then, despite his country’s many problems, on “Sambalama” he urges his people to stand tall and hope for better days to come.

How much these important but parochial messages need concern Touré’s international audience is a matter of individual choice. You can simply regard this gloriously traditional music as an exotic and mysterious luxury and tap your foot to the timeless, mesmerising beat of Touré’s desert blues (a term he hates as a lazy Western catch-all, by the way). But our appreciation is surely enhanced by an understanding of the music’s higher purpose. In a turbulent, divided country ravaged by military coups, jihadist attacks and tribal rebellions, Touré’s texts disseminate messages as vitally as Twitter and Facebook in the Western world.

Touré was born in 1968 in Binga, a rural commune near Timbuktu. His mother was a singer who sometimes performed with Ali Farka Touré, who was unrelated but became the boy’s hero and mentor. He made his first guitar from a sardine box and graduated to an electric instrument when Ali gave him one of his cast-offs. By the ’90s he was touring Europe and the US as a member of Ali’s band.

Heavily influenced by the blues-driven style of his mentor, who died of cancer in 2006, Touré’s first international album two years later was fittingly titled Songhai Blues: Homage To Ali Farka Touré. Signed by Chris Eckman when the former Walkabouts singer launched Glitterbeat in 2013, Binga is Touré’s fourth album for the label and his most traditional-sounding release to date. On 2014’s Gandadiko and Wande three years later, Touré mixed authentic African instruments with a harder-rocking urban style. Here the sound is stripped back to Touré’s guitar, the earthy sound of the banjo-like ngoni and calabash percussion. The groove is taut, the vibe is stark, almost austere in its bare-bones feel, and the only chromatic embellishment to the strictly traditional template comes from the use of harmonica on several tracks. If past albums were Touré’s equivalent of the Chicago blues, this set is metaphorically located deep down in the Delta.

In addition to Touré’s ‘message’ songs, the set is bookended by a couple of elegant and ancient praise tunes, one to the ancestral rulers of the Songhoy empire centuries ago and another to the beauty of Malian women. If this fine album bore the name of a different Touré, it would rank alongside the best of Ali Farka’s legacy. And there really can be no higher praise than that.