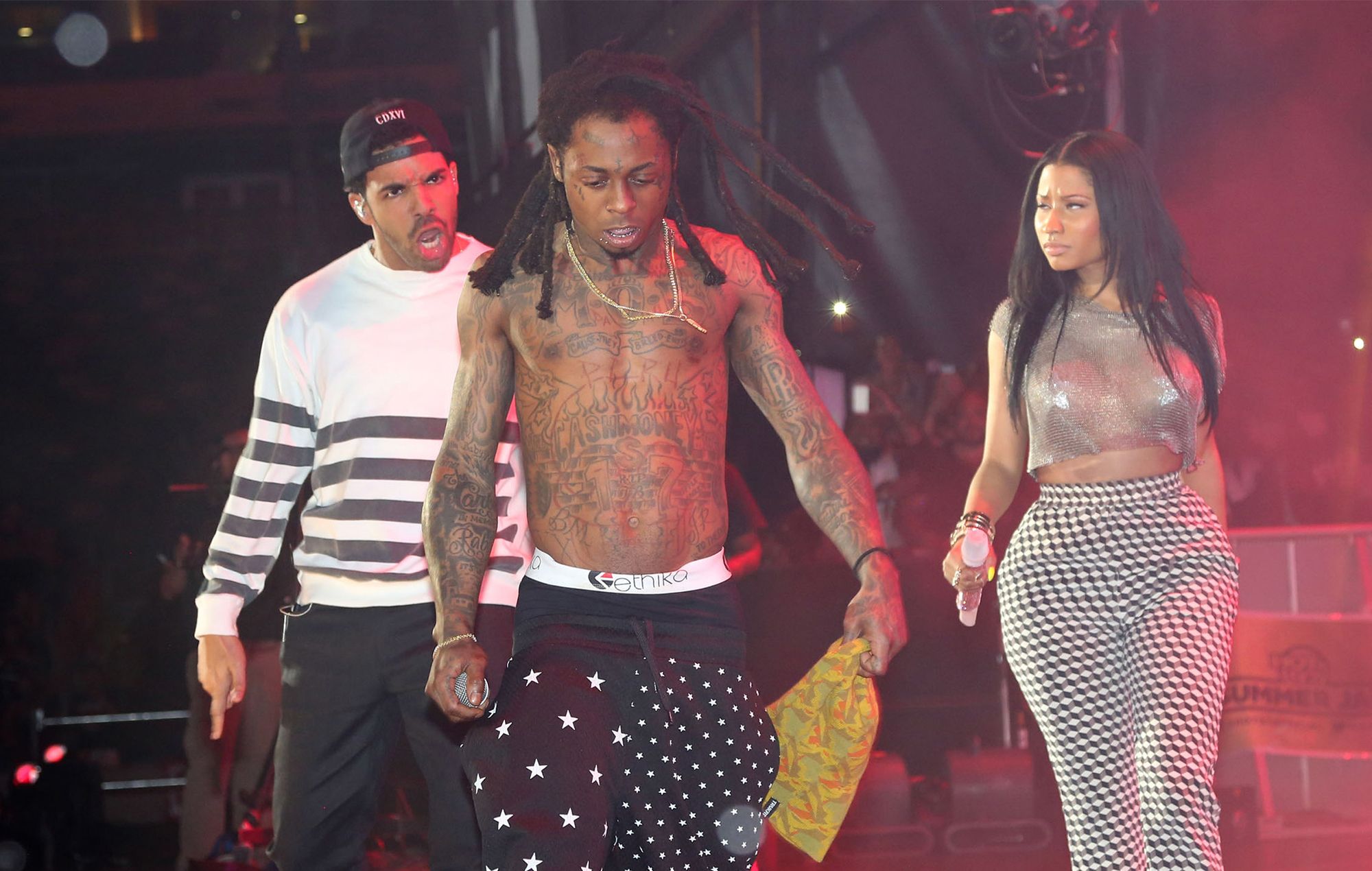 Announced less than a month ago, the show rounded out a trilogy of shows Drake hosted for his ‘October World Weekend’, a concert series that the rapper said precedes the worldwide expansion of his music festival, OVO Fest. It was initially scheduled to go down on Monday (August 1), but was pushed back five days after Drake tested positive for COVID-19.

The show itself started later than scheduled. When it did begin, a message on the screens flaking the stage read: “Unfortunately, Lil Wayne had some troubles at the border. Luckily, Drake runs the border.”

At one point in the show, Drake gave a heartfelt shoutout to both of his colleagues: “I’m standing onstage with the greatest rapper of all time,” he said, pointing to Lil Wayne. “And I’m standing onstage with the other greatest rapper of all time, she’s over there with the pink hair. By the way, like, are these bitches serious? Like, nobody can fuck with Nicki… [She’s] like the originator – it starts here, ends here, all that shit.”

Towards the end of the show, too, Lil Wayne formally announced that his forthcoming 15th studio album would be ‘Tha Carter VI’, sharing its logo on the main screen behind the stage. A release date for that is yet to be confirmed, however.

Have a look at some fan-shot footage from the concert below:

Nicki Minaj performing her “Up All Night ” Verse along side Drake at OVO fest Young Money Reunion! pic.twitter.com/JiUHbqgFmj

“Nobody can f*ck with Nicki.” pic.twitter.com/0LkZ3dWYvo

-lil wayne is an incredible performer its ridiculous
-drake is decent, hes a good time
-hate to say nicki is washed and she hardly performed we just watched her walk around to her tracks mostly pic.twitter.com/WUqEmdkHTY

Meanwhile, Drake has kept busy this week with the release of his ‘Sticky’ music video – wherein he showed support for Young Thug and Gunna, as they continue to fight against their recent gang-related charges – and his DJ Khaled and Lil Baby joint ‘Staying Alive’. Last week, he joined Nelly Furtado onstage at the first ‘October World Weekend’ gig to perform ‘I’m Like A Bird’ with her.

Minaj, on the other hand, is gearing up to drop her new single ‘Freaky Girl’ next Thursday (August 11). It’ll mark her fifth release for the year, following the Lil Baby joints ‘Do We Have A Problem?’ and ‘Bussin’, ‘Blick Blick’ with Coi Leray and ‘We Go Up’ with Fivio Foreign. Later in the year, she’ll premiere the autobiographical docu-series Nicki on HBO Max.

Last month, Lil Wayne paid tribute to Robert Hoobler, a former New Orleans police officer who saved the rapper’s life following a suicide attempt when he was a child. In addition to ‘Tha Carter VI’, he’s said to be working on a third album in his ‘I Am Not A Human Being’ series. The last instalment arrived in 2013, while ‘Tha Carter V’ came out in 2018.