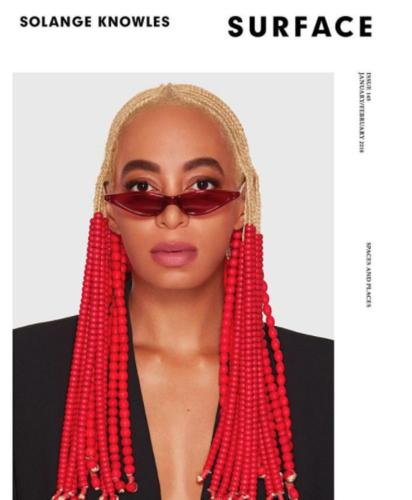 The year 2017 definitely put Solange on the map in a big way. After her beloved album A Seat at the Table dropped in September 2016, she was ficially no longer just Beyonce’s sister, she was Solange, a mighty and powerful solo songstress.

RELATED: Solange Reveals She Has Been Diagnosed With An Autonomic Disorder

Yes, she had hits before the album’s release but they never held as much power and recognition as the visual and lyrical components that tracks such as “Don’t Touch My Hair” and “F.U.B.U.” held. She proved she was an artist to be reckoned with after she shared a few self-directed videos that tied her whole vision together.

Just recently she lent her video directing talents to SZA for her “Weekend” video, that had Solange’s name written all over it.

Surface Magazine has just announced that Solange will be the cover star for its upcoming Winter issue. The feature will be available on an unannounced date this month and is said to showcase a side to Solange fans have never seen.

“The prile follows Knowles’s transformation from an eclectic pop star to a politically minded visual artist creating powerful multidisciplinary works around her critically acclaimed 2016 album A Seat at the Table,” Surface Mag writes on its website.

Check out the first photo shared below.