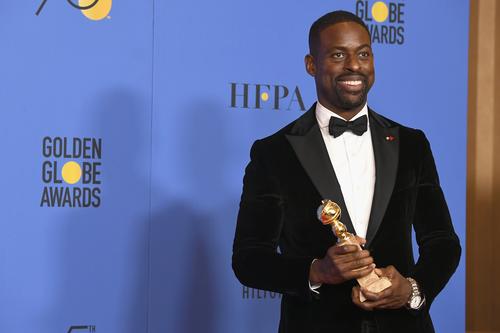 Sterling K. Brown of "This Is Us" Secures Historic Win at Golden Globes

Sunday evening, Sterling K. Brown once more made history after becoming the first black male actor to ever win a Golden Globe award for Best Actor in a Television Drama after taking home the prize for his role as Randall Pearson in NBC’s This Is Us drama. It was in 2017 that Brown made history when he won a Primetime Emmy Award for Outstanding Lead Actor In A Drama Series for the same role, becoming the first black actor to do so since 1998.

“Throughout the majority my career, I’ve benefitted from colorblind casting which means, ‘You know what? Hey, let’s throw a brother in this role, right? Really cool,” Brown noted during his acceptance speech at the 75th Golden Globe ceremonies. “Dan Fogleman (creator and executive producer This Is Us), you wrote a role for a black man, that could only be played by a black man. So, what I appreciate so much about this thing is that I’ve been seen for who I am and being appreciated for who I am, and it makes it that much more difficult to dismiss me, or dismiss anybody who looks like me,” he declared to a sea applause.

This Is Us was also nominated for two additional categories, including a nod to Chrissy Metz for Best Suporting Actress in a Television Series Drama and Best Television Drama Series, which ultimately went to Hulu’s The Handmaid’s Tale series. This now marks the tenth win for Sterling K. Brown in at least 24 major nominations throughout his career.