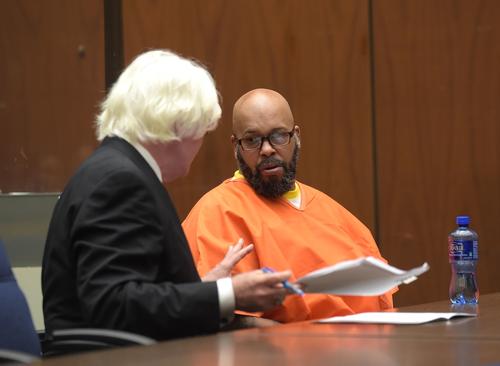 Marion “Suge” Knight, the former Death Row exec who was a larger-than-life figure for many years in the world rap music, is currently holed up in County Jail, awaiting trial for murder. However, while he’s doing so, he’s certainly not going to have his privileges stepped on by cops or any the prosecutors involved with his case.

According to TMZ, Knight has filed a motion in court, alleging that both prosecutors and ficers from  the Sheriff’s Dept. “have secretly listened to every word” he’s communicated with his lawyers since August 22, 2016. As such, he claims they’re somehow eavesdropping on his attorney-client conversations while he’s behind bars, which would course be against the law. A confidentiality agreement is something to be respected, and Knight would know that better than anyone at this point in his life.

His murder trial, which stems from a 2015 incident in Compton, California where the ex-mogul ran over two unsuspecting men, begins next week and, based on additional reporting by The Daily Mail, Knight thinks that prosecutors are trying to tarnish his relationship with his fiancee ahead the big case finally getting in front a judge. In the motion, Knight also alleges that disqualified judges were the ones who granted orders to allow the phone call spying, and now he’s insisting that any and all documents that nature be thrown out.

There’s no word on whether or not the judge currently presiding over the case will grant or dismiss the motion, but one thing’s for sure: the plot has thickened an already twist-filled plot for Suge Knight.