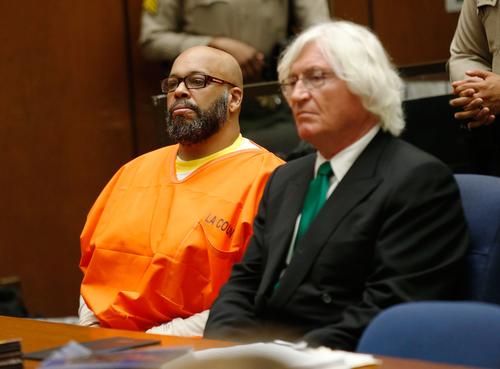 Suge Knight’s murder trial gets messier and messier. The former Death Row head honcho is currently sitting in jail and awaiting trial for a hit and run from 2015 that resulted in the death one man. However, over the past few months his associates have been dealing with issues in an attempt to help Suge. At the top February, two his former lawyers were arrested in attempts to bribe witnesses. Now, former charges have been laid.

A current and former attorney to Suge Knight have been indicted on conspiracy charges, Associated Press reports. They say the two lawyers have been charged in conspiring to bribe witnesses in his upcoming murder trial. Both Matthew Fletcher and Thaddeus Culpepper also face three additional felony charges.

According to their report, Fletcher allegedly tried to pay f witnesses to give Knight a good testimony during Knight’s murder trial and apparently, Culpepper approved a false testimony. The two were released on Monday after appearing in court. They’re arraignment is scheduled on March 18th.

Aside from Suge’s legal issues, his fiancée, Toi-Lin Kelly, was recently sentenced to three years behind bars after she violated probation. Reports said she was communicating with Suge indirectly to help set up interviews for Suge Knight’s BET documentary on Death Row. In addition, there were text messages shown in court that revealed that she put money in other inmates accounts which prosecutors  claimed was for phone privileges for these interviews.