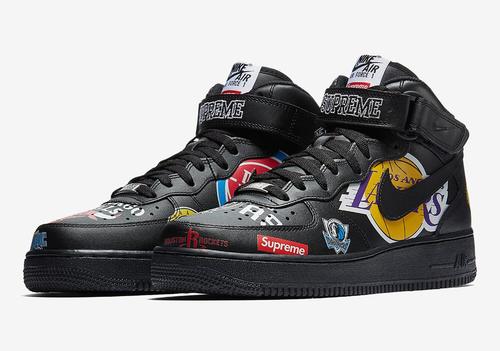 Supreme has another Nike Air Force 1 collab in the works, this time focusing on the early 2000s-era all-over NBA logo craze.

Official images the black colorway have surfaced today, revealing that the right shoe will be dedicated to classic Eastern Conference teams like the Knicks, Pacers and Bulls, while the left shoe bears the logos Western Conference squads like the Lakers, Suns and Spurs. Of course, Supreme box logos are also featured amid the plethora NBA logos.

Release details have not been announced but the NBA-themed Supreme x NBA x Nike Air Force 1 Mid are rumored to drop sometime this Spring for $165 each. Check out the early images below and stay tuned for release info.