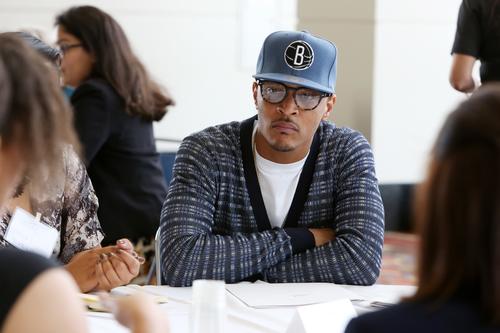 In 2017, there was a huge race between candidates for the position Mayor in Atlanta. Many rappers from the city stepped up to endorse the now elected Mayor Keisha Bottoms. From Ludacris to T.I. to Lil Yachty to Tyrese, many members the hip hop community were standing by Bottoms during the election. She announced her transition team earlier today at a press conference and among those included are some heavy-weights in the rap game.

T.I. and Killer Mike were both announced as part Mayor Keisha Bottom’s transition team earlier today, FOX 5 Atlanta reports. The two rappers join nearly forty other diverse members the community that range from CEO’s to educators to musicians to help Keisha Bottoms shape policies in the city. Mayor Bottoms decision to have a variety people on board with her is to help bring new ideas to the table and develop proper policies for Atlanta.

“I really want them to come with fresh ideas and to bring to me their recommendations for best practices in the city Atlanta based on their varied experience and backgrounds,” she said at a press conference, “That’s why it was important for us to have representations across communities in Atlanta.”

Both T.I. and Killer Mike were two people who were not only been highly supportive her campaign but also active as well. The two them join 36 other members including Delta Airlines CEO, Edward Bastian, former Obama apointee, Cassius F. Butts, educator Ron Clark and many others.

Watch the full press conference below.