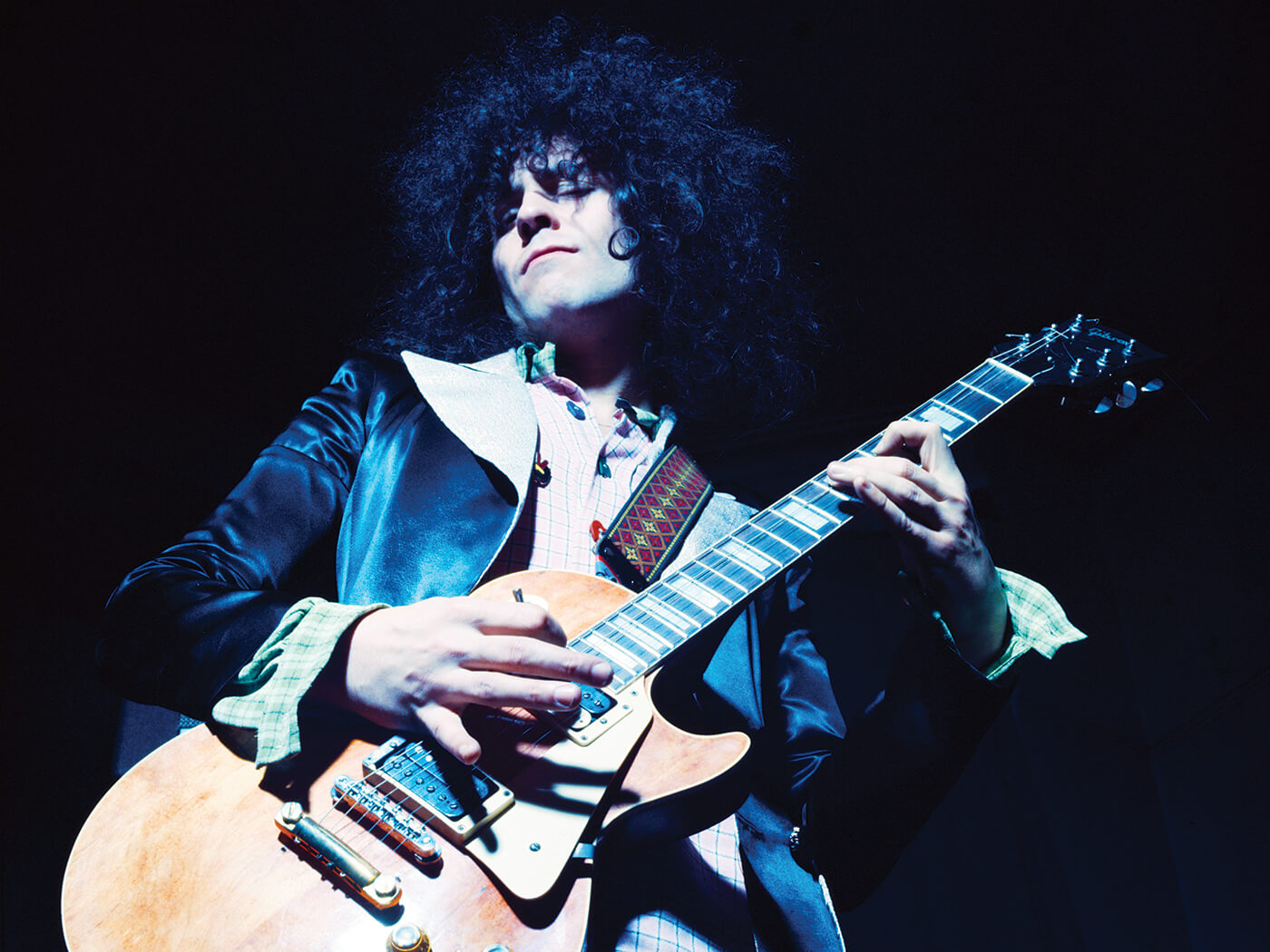 In 1972, England found itself staring down a very bleak decade. Inflation continued to soar, and unemployment hit its highest rate since the 1930s, with nearly one out of every four people out of work. Tensions in Ireland escalated, and uncertainty loomed on seemingly every front. Those and other trends would culminate in blackouts and dole queues, and a general sense that the country and its culture were crumbling. But the sprite born Mark Feld existed in direct and ecstatic opposition to such doom and gloom. The country moped, but he rocked. That summer the rockstar rechristened Marc Bolan greeted his fans with a hearty mwaaaa-waaah-wahh-waaaaaah-oah! that served as a fanfare for the buoyant groove and giddy poesy of “Metal Guru” and for the poses and skewed introspection of The Slider. It wasn’t the best-selling album of the year – Rod Stewart outsold Bolan with Never A Dull Moment – but Bolan arguably more than any other musician at the time seemed to represent the future of rock’n’roll, not just where it was headed but who was defining it.

1972 was, of course, a signal year for glam rock, with the release of Bowie’s …Ziggy Stardust…, Mott The Hoople’s All The Young Dudes, Roxy Music’s self-titled debut and, from the American camp, Lou Reed’s Transformer. While all those albums were hits at the time and have only grown in esteem over the decades, the year belonged to Bolan. It was peak T.Rex-tasy, the most intense wave of pop fandom since Beatlemania a decade before, and none other than The Beatles themselves realised it, especially Ringo Starr. This was a youth moment, a means for a new generation of listeners (who weren’t of record-buying age when the Fab Four broke up) to plant their own flag and claim this frizzy-haired imp as their idol, their Elvis, their John, Paul, George, Ringo. With his ’50s rock riffs and fanciful lyrics, he spoke a language innately understood by teenagers, specifically young teenage girls, which sent the adults scrambling to keep up. After the unsmiling self-seriousness of the previous decade’s art-rock bands and hippie rockers, T.Rex were more subversive, more inscrutable, more joyful for sounding so facetious and unabashedly fantastical.

As this new boxset makes clear, Bolan relished his imperial phase. Collecting The Slider along with B-sides, live sets, radio performances and the soundtrack to Born To Boogie, it depicts the glam auteur as an artist acutely aware of his own celebrity and alive to the effect fame had on his music. Very little on here is new or exclusive, but having it all together in one doorstop of a boxset brings out new details and implications in the music and offers fresh angles on a complicated artist at the height of his game.

The Slider is the centrepiece of 1972, but that’s not where the story begins. Bolan started the year with Electric Warrior still at No 1 on the UK albums chart, but he was over in America trying to capitalise on the success of “Get It On” (retitled “Bang A Gong” for blushing yanks). The radio performances find him alone with his acoustic guitar, without the backup of bassist Steve Currie, percussionist Mickey Finn or drummer Bill Legend. In this setting he reverts to his folkie incarnation, when he’d sit cross-legged and strum rapturously on expensive rugs. Bolan finds surprising depths to songs like “Main Man” and even “Jeepster”, and “Ballrooms Of Mars” melts abruptly into “Mystic Lady”, as though Bolan needs to dispel that melancholy as quickly as possible.

While it was based in American rock and R&B, Bolan’s brand of glam didn’t translate to American audiences circa Watergate, and “Bang A Gong” was the only T.Rex single to break the Top 10. Back in England, however, he was a conquering hero and played Wembley Arena in early March, with none other than Starr filming the show for a theatrical movie. From Wembley he travelled to the Château d’Hérouville outside Paris and then to Rosenberg Studios in Copenhagen, where he recorded tracks for The Slider. It was released on July 21, the day of the Bloody Friday bombings in Belfast and the same month as the dockworkers strike that would culminate in a national state of emergency. But The Slider finds new ways to swagger, in particular on “Buick McKane”, with its start-stop riffage and a scissoring cello solo.

It’s a massively inventive album, but it’s also a work of surprising self-reckoning. Bolan might claim he’s “never kissed a car before” on the title track (a dubious denial), but he also declares, “And when I’m sad, I slide!” Bolan turns that last word into a mission statement, a cry of joy and pain – one that evokes a hard truth rather than state it outright. T.Rex’s music was never merely escapist; rather, whimsy became a weapon to beat back the dread and stifling mundanity of the real world. He made every listener a rabbit fighter.

If The Slider is his deepest and most compelling statement, then Born To Boogie is the exclamation point. Directed by Starr and featuring an assemblage of live footage, studio jamming (with Elton John, no less), and lots of goofing around at John Lennon’s Tittenhurst estate, it’s a frothy, fizzy confection, self-indulgent but endearing and truly exciting whenever it cuts to the live footage. Especially on the epic live version of “Get It On”, which grooves manically for 11 minutes, T.Rex emerge as a full band, all rhythm section, as resourceful as it is mighty. Bolan seems to understand that his immaculate riffs and bubblegum imagery played better to millions of people than it did to just thousands, as though none of his songs was ever complete without the roar of his devoted fans. “Spaceball Ricochet” in particular is a love song to his audience, which makes these live versions sound all the more poignant: “Deep in my heart, there’s a house that can hold just about all of you”, he declares, but that “just about” injects a deep sadness into the song. No matter what he does or how hard he plays or how popular he becomes, it’s not quite enough.

In other words, The Slider is an album almost as dark as its times, and this boxset affectionately demonstrates how that darkness manifested in other aspects of his life and art, whether it was his increasing dependency on booze and drugs or the disarming solitude of his radio performances or the desperation of songs like “Main Man” and “Ballrooms Of Mars”. “I’m talkin’ ’bout night time”, he sings on the latter, “when the monsters call out the names of men”. Those monsters manifest on Tanx, which Bolan recorded in November 1972, an album that began a decline halted only by 1977’s Dandy In The Underworld. It would be one long slide downhill from 1973 onwards, then, but this boxset ends on a happy note, with a Christmas present to his fanclub: a delirious collage of sound effects, holiday greetings and sing-alongs. “I’d like to thank you for a really fine year,” he tells his fans. “Have a good year… and don’t cry.”