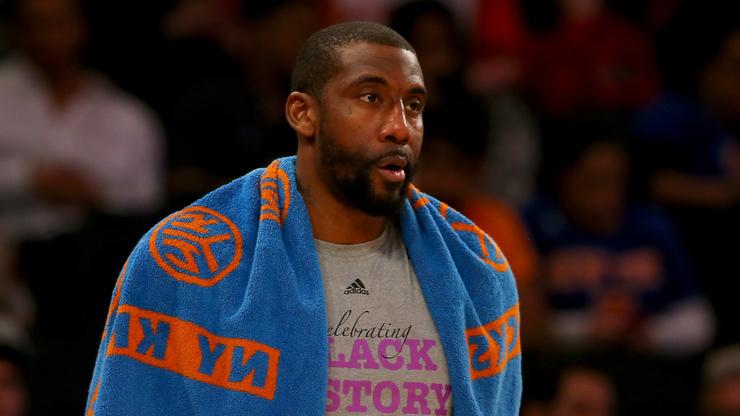 They'll chalk it up as hearsay until Amar'e Stoudemire says otherwise. It would appear that Stoudemire has been found guilty of "doing too much" in his defensive of maligned Knicks' owner James Dolan. According to the production staff at LeKnicks Podcast, a periodical devoted to New York Knickerbockers' basketball - Amar'e hit them with a disapproving DM upon the discovery of a post in which his face is juxtaposed with a quote praising James Dolan, the bane of every surviving Knicks fan in '19.

"For me, I signed with the Knicks because of James Dolan," the quote reads, below which stands the following caption, authored by a LeKnicks' staffer with the intention of espousing modesty out of Amar'e Stoudemire. "Of course you did, he was the only one willing to shell out $100 mil on you and your weak ass knees," reads the LeKnicks caption. "FOH with this brainwashed propaganda bullshit."

From there, Amar'e is alleged to have DM'd them a 2nd time with idle threats of a violent clash. "Yo. Meet me in person. I want to chat with you," Stoudemire allegedly wrote DM. LeKnicks provided  "unauthenticated" receipts of DM's Screenshotted post. As Complex's Abel Shifferaw pointed out, the Twitterverse has intercepted Amar'e's underlying motives for defending Dolan's honor online: a potential NBA comeback no sooner than next season. Chris Haynes of Yahoo Sports has indicated that about 12 NBA teams sent scouts to watch him and Monta Ellis train/play on the Pro-AM circuit. 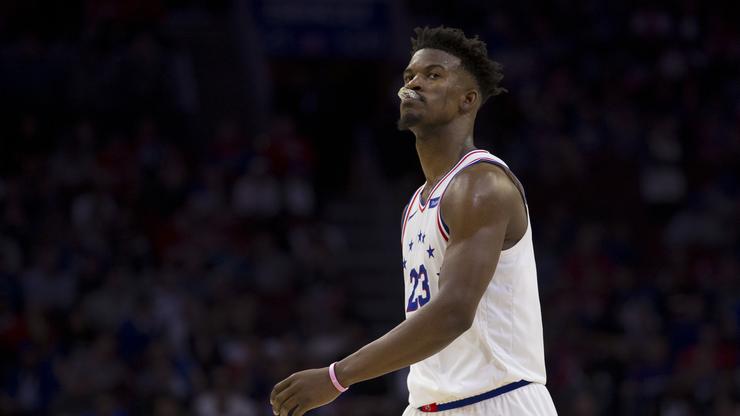 Dwyane Wade and "Ocho Cinco" rag on Jimmy Butler to get a deal signed with the Miami Heat.

Despite everyone's best efforts to fit Jimmy Butler on a speculative Houston Rockets' roster leading up to next season - all the signs point towards him taking his talents to Miami Beach. How's about a timeline to bring us up to speed. Like anything else NBA-related with a measure of truth behind it, the Butler-to-Miami came to a head the moment Adrian Wojnarowski dropped a "Woj Bomb" with Jimmy's name written on it.

According to the ESPN Insider, Butler either met or is going to meet Miami Heat officials at an undisclosed location in South Florida. He does insist that while, Miami Heat is a more ideal fit, given his needs and wants, Butler will meet the Rockets later in the week, and is reportedly open to talking shop with his current employers in Philadelphia shortly thereafter.

Woj's Tweet, while altogether inconclusive, did the rumor going, to the point where Jimmy himself felt the need to join the discussion. In a series of Tweets with his famous friends, Chad Johnson, and the recently-retired Dwyane Wade, Butler gave off the impression that Miami is the ideal fit/destination for reasons he fell short of explaining (on a public forum).

"Nah bro. Let’s kill that rumor now," Wade wrote to Jimmy in jest. "It would only be for the HEAT!" Unfortunately, Wade's reverse psychology had no effect on Butler, who placated his former teammates with a reply of, "hey big head."

Next up was Chad "Ocho Cinco" Johnson demanding that Butler commit himself to Miami at once - but again, Jimmy held firm, this time informing the ex-NFLer that once he's come to his decision, he'd be the first to know phone.

Big Draco refreshes the web page on his feud with Famous Dexter.

Call it a bluff all you need, however Soulja Boy continues to be baiting Famous Dex with open arms, a number of weeks after their on-line skirmish descended into chaos. At exactly midday Today, Soulja Boy tweeted, "I can’t wait to see well-known dex." It's unclear whether or not he meant "see you on-line," or "see in you within the streets," however the underlying message is however fairly clear: Big Draco needs all of the smoke if that wasn't made abundantly clear by the air weapons he pointed on the monitor throughout their live-session.

Let's hint this feud again to its hometown. Although the Draco chronicles are mazy and exhausting to comply with at occasions, all indicators level to Famous Dex taking offence to Soulja Boy's assertion that he fathered his type. For what it is price, Famous Dex had each proper to be offended, however in Soulja Boy's defence with out stirring the pot with an Exhibit A-level specimen, his proclamations had been falling on deaf ears.

And to at least one's shock, Soulja's life-affirming mantra of "on this world you both crank that soulja boy or it cranks you" stays pinned to the highest of his Twitter feed for public consumption. As for Famous Dex, the window for a rebuttal looms overhead.