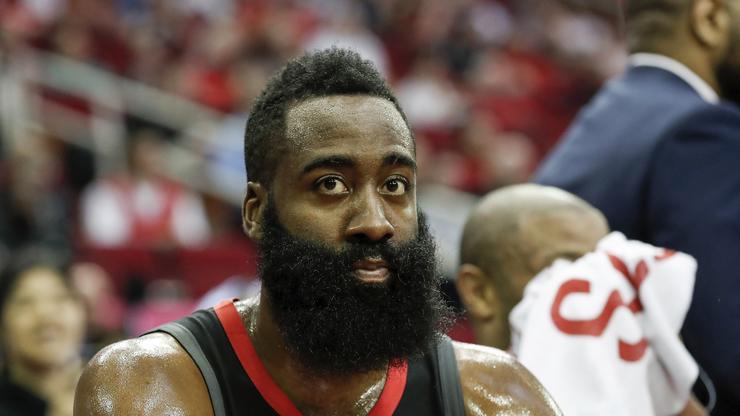 Ever since Nipsey Hussle's tragic murder on March 31st, a plethora of people have come out to show their support for the fallen rapper, including multiple athletes. Steph Curry, LeBron James, and Russell Westbrook are among some of the most prominent names who have posted tributes to Nipsey. The latest NBA player to honor Nip was James Harden of the Houston Rockets. After the Rockets game against the Jazz on Wednesday night, Harden wore a custom Nipsey Hussle chain to his press conference.

"He's one of my close friends," Harden told reporters when asked about the piece. "This journey that I’m on is for him, it's plain and simple."

Harden was among one of the thousands of people who showed up to the Staples Centre last week to pay their respects to the artist and philanthropist. The two went to the same middle school and have been close friends over the years. For Harden, he just wants to keep Nip's legacy alive.

"That name will never die. People will remember him," Harden said. "That name Nip. Everybody knows that name now. I'm just another person helping that name live on."

When news of Nipsey's murder first broke, Harden was excused from practice for what were described as "personal reasons."

Young M.A Drops $140K on Custom Chain For Her Birthday

There's nothing wrong with buying a "Treat Yo' Self" present when your birthday is on the horizon, and Young M.A did just that. The rapper will be turning 27 on April 3, and to celebrate another trip around the sun, Young M.A dopped a massive amount of cash on a new chain.

According to TMZ, Young M.A didn't just want to buy just any ol' necklace, so she called on Luxe Jewelers designers Ali G and Ali L in Atlanta to create her a custom piece. The publication reports that the chain has more than 39 carats of diamonds with a weight of 129 grams. The whole piece set her back a reported $140,000.

If you're going to go big for your birthday, you might as well go all out. Young M.A is partying it up overseas for her big day, which will actually be drawn out to a two-day celebration. On her actual birthday, the rapper will be in Dubai at Drai's and the following day the partying continues in Abu Dhabi at MAD on Yas Island.

It looks like M.A has accepted her fame status, but she makes sure that she's grounded. In an interview she did with Fader a few years back the rapper said she wasn't into being "extravagant." “I still feel normal. Like, I don’t feel like I’m a superstar," Young M.A said. "I still put myself in a position to be humble, to be normal. I don’t live in a big house, I’m not real extravagant or anything. I just like to be regular. I don’t want to lose myself.”