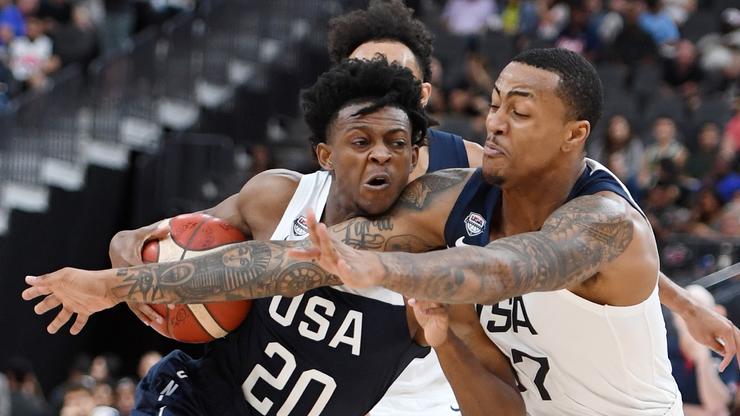 De’Aaron Fox is the latest Team USA recruit to opt-out of the running, leading up to the 2019 FIBA World Cup. According to Yahoo Sports' Chris Haynes, the 3rd-year pivot is withdrawing to focus on the Sacramento Kings' playoff push in the upcoming 2019-2020 season. While the Kings might be several playoff rungs off the pace in the new-look Western Conference, Fox, and his Kings teammates, specifically Marvin Bagley and Buddy Hield, put the league on notice by focusing on team chemistry to great avail.

Although Fox was bound to play second fiddle to Kemba Walker within this Team USA group, scouts have been enthralled with his play throughout preparation camp, leading several pundits to project "combo" backcourt be placed out of sequence. But alas, coach Gregg Popovich opted to play Derrick White ahead of Fox in the rotation during Friday's exhibition with Spain, limiting De’Aaron Fox to 6 minutes of action. The writing was most certainly on the wall, from there on in. 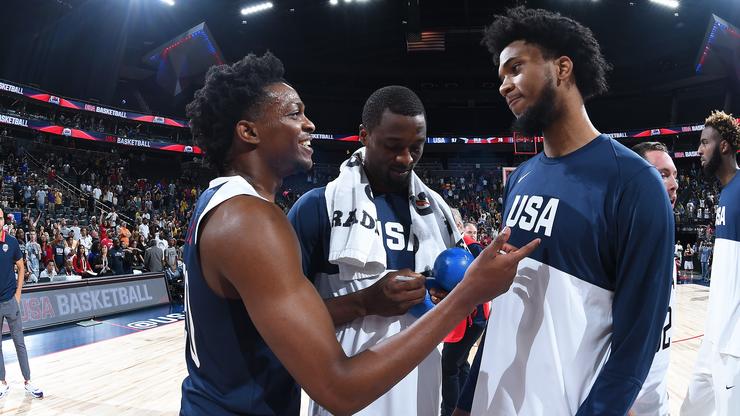 Unlike in 1992, when an overconfident Dream Team roster got blasted out the gym by a ragtag college outfit- the current crop has so far, stood their ground against younger more inexperienced competition. After coming out the victor in a warmup scrimmage (held yesterday)- Team USA's senior squad underwent a few changes across the board.

For starters,  Thaddeus Young and Bam Adebayo were eliminated from the running. Throughout the mini camp leading up to this summer's FIBA World Cup, Young and Adebayo factored into the squad as the 11th and 12th options off the bench. In the interim, their spots will be taken up by Marvin Bagley III of the Sacramento Kings and Derrick White of the San Antonio Spurs.

While Young and Adebayo's demotion all but rules them out from participating in the upcoming tournament, White and Bagley still face a tough test if they are to hang onto their spindly roster spots- as Team USA's senior squad currently stands above the accepted limit, with 17 players under consideration. Of those 17 currently listed on the senior squad, two of them are being monitored in sickbay: Kyle Lowry for a longstanding injury to his thumb, and Marcus Smart for a calf strain. USA Basketball's managing director Jerry Colangelo is not allowed to trim his roster down to a baker's dozen until 48 hours prior to the commencement of the tournament (Sept. 1st).

Electric Forest takes place this weekend and an unfortunate turn of events has reportedly left 200 hopeful volunteers without no work, no tickets, and no way to get reimbursed for the time and money invested. These people hired by Kingdom Promotions are being turned away after traveling from near and far to Rothbury, Michigan.

Below, a post from The Festive Owl reveals the message Kingdom Promotions sent out to 200 potential volunteers, telling them they didn’t make the cut with no time to spare. The company sources circumstances out of their control for the sudden changes. Although Kingdom Promotions does offer a refund for volunteer deposits, there are undoubtedly many people left struggling with this inconvenience.

Being that Kingdom Promotions was hired by a third party, this is out of Electric Forest’s control. According to the festival, the promo company overstaffed the weekend by several hundred individuals.

We reached out to Electric Forest directly and this is the full response:

Kingdom Productions was hired by a third party staffing vendor, and were contracted by that vendor to help them fill volunteer positions at EF2019. While the number of volunteer positions for them to fill was clearly specified in their contract with that vendor, Kingdom overstaffed their available positions by several hundred. These volunteers were not hired by the festival and are not part of Electric Forest’s Fan2Staff program. With Electric Forest sold out since last December, unfortunately there are no options for the festival to consider how we might be able to help those affected by Kingdom Productions’ error. There is physically not enough space on site to accommodate them.

With Electric Forest back to one weekend this year, spare tickets are few and far between. Resales are upwards of $500. For those already in the area who were hoping to work, this cut is devastating.

Beware for future volunteer needs. — Kingdom Promotions has cut 200 Electric Forest volunteers after many had already…