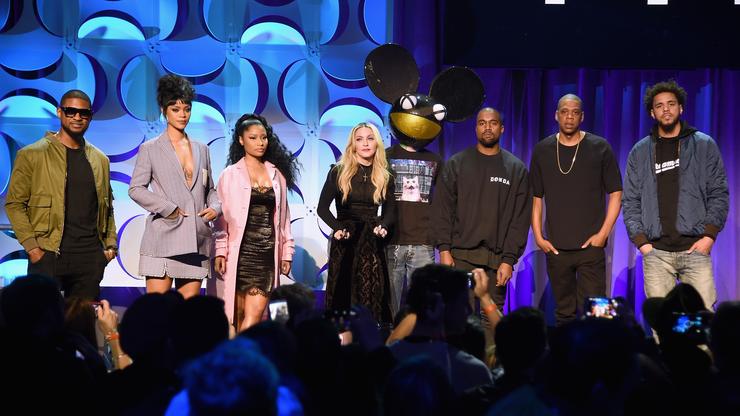 We are living in unprecedented times right now. The world has effectively been shut down for an undetermined amount of time because of the coronavirus outbreak. In order to protect the millions of people at risk, governments worldwide have instated shelter-at-home measures, urging people to stay inside and practice social distancing. Every industry has been affected by the outbreak, including the music business. However, leaders like TIDAL are trying their hardest to make these next few days/weeks/months comfortable by digging through the archives and providing ample live-stream concert material for us to enjoy.

Announcing the At Home With TIDAL live-stream series, TIDAL revealed that daily live-streams will be available for music fans to connect with their favorite artists while still social distancing. Beginning today, the streaming service will shuffle through genres to cater to a wide array of music fans. The 12-hour daily live-streams will feature exclusive content from past performances by some of the industry's finest.

Today is Latin day, featuring Jennifer Lopez, Daddy Yankee, and more. Tomorrow will focus on pop, with performances from Lizzo, Rosalia, The Chainsmokers, and others. Friday will be electronic before the real fun starts on the weekend.

Saturday will bring us a flurry of past performances by some of hip-hop's greatest current stars, including Jay-Z, J. Cole, Lil Wayne, Meek Mill, Gunna, 21 Savage, and City Girls. Then, things continue on Sunday with an R&B showcase of Beyoncé, Rihanna, Ari Lennox, Trey Songz, Jorja Smith, and H.E.R.

Since we can't enjoy any music festivals in the foreseeable future, have some fun this weekend (and right now!) with TIDAL.

Coachella Valley Music and Arts Festival‘s 20th anniversary went down over two weekends last year — but soon we can relive it all over again!

A new documentary titled Coachella: 20 Years in the Desert is coming to YouTube Originals on March 31, ahead of the festival’s 21st installment. Produced and directed by Chris Perkel, the new doc includes never-before-seen footage, performances, and interviews from artists over the years.

See the teaser below and take a closer look at the EDM on Coachella’s 2020 lineup here.

The end of the decade is only days away, and there’s so much to look back on and think about how we go here. The same is obviously true for music, and who better to guide us through the past decade than one of our community’s best tastemakers: Diplo?

Say what you will about Diplo, but there’s no denying that the man has had finger on the pulse of music for a little over two decades. In the past 10 years especially, his label Mad Decent has grown by leaps and bounds, not to mention his own personal career. Beyond just Diplo, he’s also worked with Skrillex on Jack Ü, Sia and Labrinth on LSD, and Mark Ronson on Silk City. And that’s really just been in the last 5 years, for the most part.

Diplo brings his impeccable taste to his Diplo & Friends show on BBC Radio 1 to present his Best Of The Decade mix. Check it out below as well as the tracklist.

According to Official Charts, Random Access Memories beat out every other dance music album in vinyl sales over the past 10 years. In the UK, it placed as the 62nd of 100 best-selling vinyl record of the 2010s.

The 2013 album made a statement upon its release, cleaning house at the 56th Grammy Awards, with Album of the Year and Best Dance/Electronica Album. “Get Lucky,” featuring Pharrell Williams and Nile Rodgers also won Record of the Year and Best Pop Duo/Group Performance.

Fleetwood Mac‘s Rumours, and albums by Amy Winehouse, Pink Floyd and Stone Roses topped the list. Check out the top 10 below.

If you’ve ever wondered how Madeon makes such gorgeous creations, he tells all in a new interview with Music Radar.

Madeon reveals tips and tricks of music production and songwriting he’s picked up along the way. From his earliest, humble beginnings, trying to sound like Daft Punk with Audacity effects, to making “Pop Culture” on his Novation Launchpad, and beyond.

I’m proficient at most DAWs but I think FL Studio is objectively the most advanced. It’s underrated and has features that are unmatched.

I got a Roland Juno-106 because I’d used emulations of that and thought it would be more fun tweaking the real thing.

I also got a Moog Model D and started a secret collection of gear that I know from inside sources were used on some of my favorite albums.

Sometimes I’ll close my eyes and A/B between hardware and software and pick whatever sounds best, whether it costs $10 or $10,000.

What he learned from Lady Gaga:

I guess I learnt to realise that you’re not a machine solving a problem; you’re a human being and if you allow yourself to be vulnerable in your writing you’ll be more sincere.

Using a plugin that everybody hates and finding some cool trick that nobody recognises is more precious than using some expensive gear that someone might have.

There’s plenty more where this came from  Music Radar. Make sure to read the full interview if you’re interested in Madeon’s creative process. 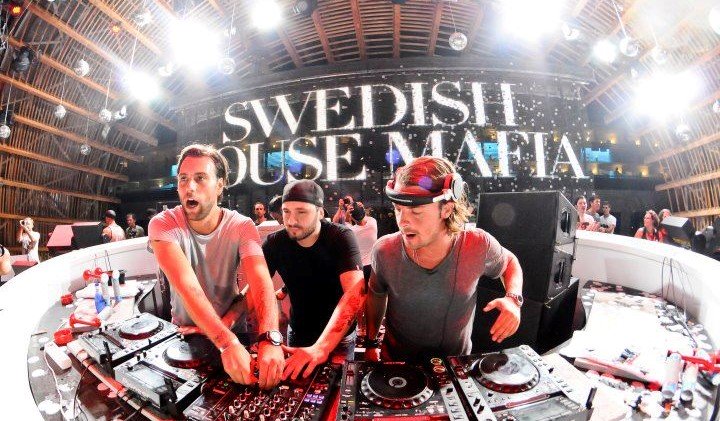 Billboard Names The Top 100 EDM Moments of the Decade

Electronic dance music — EDM as we call it — has blown up within the last 10 years in ways we could have never imagined. The industry has taken major strides and shifted from the underground to the mainstream with tons of memorable moments along the way.

Billboard helps define this decade in EDM with The Top 100 EDM Moments of the 2010s. This collective list covers the rise and fall of Avicii, Swedish House Mafia‘s One Last Tour, Skrillex‘s launch of American dubstep, Baauer‘s viral sensation, “Harlem Shake” — and so much more.

Daft Punk, deadmau5, Diplo, Calvin Harris, and many more are mentioned for their contributions. From Martin Garrix‘s “Animals” to the discovery of Marshmello‘s true identity, to coining the term “EDM” — it’s all in there.

See the Top 10 below and check out the full list here Billboard.

1. The rise and fall of Avicii

2. “EDM” becomes dance music shorthand, and not without controversy

5. The emergence of Disclosure’s “Latch”

Over three years ago, K?d dropped his original remix to Daft Punk’s “Doin’ It Right,” one of the tracks that truly cemented his rise to fame early on in his career. The huge, spacious synths coupled with natural nostalgia from the song were an instant hit combo and it’s still a hit in his sets to this day.

But, it’s 2019 now, and apparently it was time for an update. Three years on, K?d just dropped the v2 remix to “Doin’ It Right” and it brings a whole new flavor to the fan favorite remix.

The difference between v1 and v2 is like the difference between Discovery and Random Access Memories. There’s an extra level of instrumentation and funk laid on top of the remix, especially in the final drop. Like the original remix, this one is also available for free download here.

REPORT: Daft Punk Finally Back In The Studio

It will be seven years in 2020 since the world last heard new music from Daft Punk. Though members Guy-Manuel de Homem-Christo and Thomas Bangalter have worked on others’ projects in the meantime, the robotic duo’s own output is currently in the longest drought since the space between Human After All and Random Access Memories. (And even during that interim, they still put out a live album and scored the Tron: Legacy film for Disney.)

But now, according to popular website Has it Leaked?, Daft Punk are back in the studio and working on… something. The news came in a large artist dump of names, including Purity Ring, Drake, Tame Impala, and others, describing where they’re at in the production process. Under “in the studio,” that instantly recognizable name is also supplanted, “yeah, Has it Leaked has your back.”

Of course, who are we to believe what Has it Leaked? says? Historically, the website actually has a pretty good track record when it comes to providing information about leaks and new music. They explain themselves in a follow up tweet as well (below):

About the Daft Punk thing. We’ve nailed Gorillaz, Taylor Swift and Eminem in the past. We do have a good track record. That doesn’t mean we know exactly what they’re going to release in 2020.

Daft Punk are something of unicorns in the EDM world, so touting their return is always something to be celebrated, yet also to be taken with a healthy dose of skepticism. Only time will tell if the two French robots return to the scene next year.

Daft Punk’s album Discovery is one of the best collections of songs ever presented in electronic music, and it all begins with this song: “One More Time.” Today, the classic turns 19 years old.

“One More Time” is one of those songs that, even if you don’t listen to electronic music or aren’t even aware of it, you know the song. With the emphatic horns in the intro, and the catchy bassline, plus that iconic vocal, it has become a song synonymous with the rise of dance music culture and the popularity of our favorite robots.

The Daft Punk album itself celebrated its 18th anniversary earlier this year, but the single was released three months prior on November 30, 2000. As we near the end of this decade, it’s certainly still a track to look back on fondly.

Listen to “One More Time” from Daft Punk once again below.

Earlier this week, Billboard staff ranked what they considered the top 60 dance songs of the decade. Many of the choices on the list were expected, but the top spot going to Todd Terje’s “Inspector Norse” definitely came as a shock to most.

Yesterday, the staff ranked their top 40 dance albums of the decade — and in an era where streaming and singles became more and more powerful, these albums are truly ones that challenged the status quo and made a name for the artists who released them.

When looking back at the best albums of the decade, you have to not only take into account how the album has held up, but also the impact it made at the time it was released. For that reason, albums from Calvin Harris, 18 Months, and David Guetta, Nothing But The Beat, were absolutely necessary inclusions. Choosing Justice’s album Woman Worldwide is an interesting choice, until you read how editor Kat Bein considered that it was a stunning amalgam of their three albums that was transformed into something greater than the sum of its parts.

Other albums like Jamie xx’s In Colour and Jack Ü’s Skrillex & Diplo Present Jack Ü were also clear choices, though I’m not sure if we would have included the latter in our own top 10 of the decade.

See the top 10 below and go here to see the full list from Billboard.