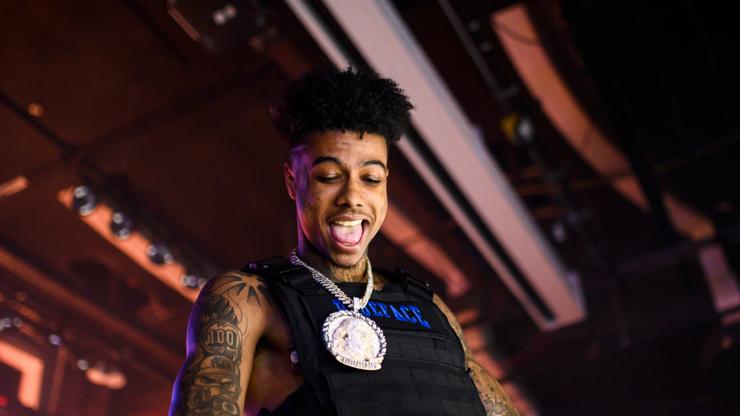 Blueface’s baby mama went on an anger-filled attack, smashing the rapper’s windows and keying his cars this week.

Blueface quickly rose the ranks in the rag game but, in the last year, he has not been able to level up artistically. As we wait for the next stage in the Los Angeles rapper’s career, he appears to be more preoccupied with social media antics.

The off-beat recording artist filmed his baby mama, Jaidyn Alexis, taking a metal “pooper scooper” and smashing his property with it. She smashed some windows and damaged his goods on the interior of his home. Then, she seemingly went to the garage and keyed his cars, also leaving footprints on the hoods.

All of this happened as Blueface proudly stuck a camera in her face and egged her on. He didn’t try and stop her — in fact, he didn’t really even seem too mad about it all. After the attack, he showed off the damages to his cars.

“She crip-walked on my shit, man,” joked Blueface after seeing the footsteps on his cars. “Bitch, you keyed my…” he added in awe.

Clearly, the man couldn’t care less about what his baby mama does to try and piss him off. Nothing will get through to him. After all, he’s got millions of dollars and paying for a new paint job isn’t that much of a hit. Still, happy wife, happy life… Jaidyn Alexis is not happy by any means. 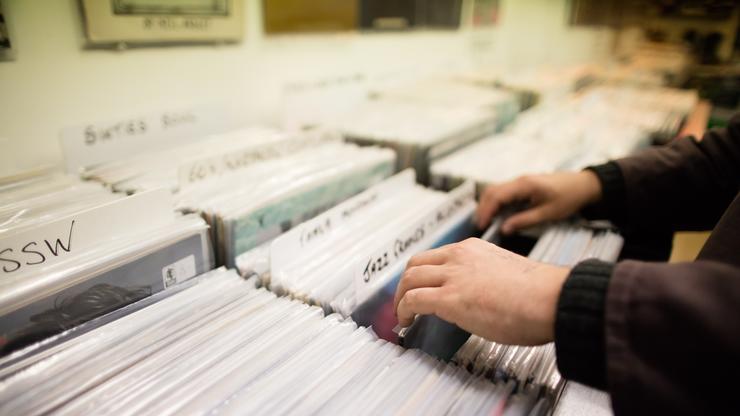 A fire in California may have a drastic impact on Vinyl production.

A massive fire burned through the manufacturing and storage facility for Apollo Masters in Banning, California, Thursday, according to The Desert Sun.

No employees were injured, but with Apollo Masters being one of the only manufacturers of lacquers in the world, the fire could shake up Vinyl production worldwide. “We are uncertain of our future at this point and are evaluating options as we try to work through this difficult time," a statement on the company's website reads.

Pitchfork spoke with Ben Blackwell, co-founder of Third Man Records, email: “From my understanding, this fire will present a problem for the vinyl industry worldwide,” Blackwell wrote. "There are only TWO companies that make lacquers in the world, and the other, MDC in Japan, already had trouble keeping up with demand BEFORE this development.

“I imagine this will affect EVERYONE, not just Third Man Pressing and Third Man Mastering, but to what extent remains to be seen.”

Pitchfork also contacted David Read, vinyl production and sales coordinator for Duplication, who believes that the damage “will directly affect all vinyl plants, bands/labels, mastering engineers, plating facilities etc., anyone who used lacquers as part of their vinyl production. In my almost 40 years experience the vinyl industry as a whole is incredibly resilient and filled with talented professionals who will, and already are, teaming together to find a way out of this current problem.”

Vinyl popularity has been on the rise in recent years. In 2018, sales grew 12 percent from 8.6 to 9.7 million according to The Verge.

Swedish House Mafia’s stage production at Creamfields was apparently so intricate and large that the entire Arc stage had to be shut down ahead of their performance this past Sunday. When the trio finally took to the stage, they came with the lights, sound, and fire that one would expect of an act their size.

Unfortunately, it appears that their overzealous production caused some permanent damage to the festival’s own production. A post in the Creamfields Social Facebook group, then shared to , tells of an attendee in a tattoo shop telling the “lads” about his time at the festival when “one of the guy who was involved in setting up the stage for the Swedes walks in.”

He says that he was told the flames used by Swedish House Mafia caused “£4 million worth of damage to the screens.” Ouch.

If you’re wondering how that could possibly happen, just take a look at the video below to see just how intense the pyro was from their set on Sunday. Of course, this is just one part of their set, too. The flame came out multiple times over the course of the group’s 90-minute performance.

At the end of their set, they teased another date coming soon. No word yet on what it could be, but chances are we’re finally getting that first new single. Stay tuned to find out! 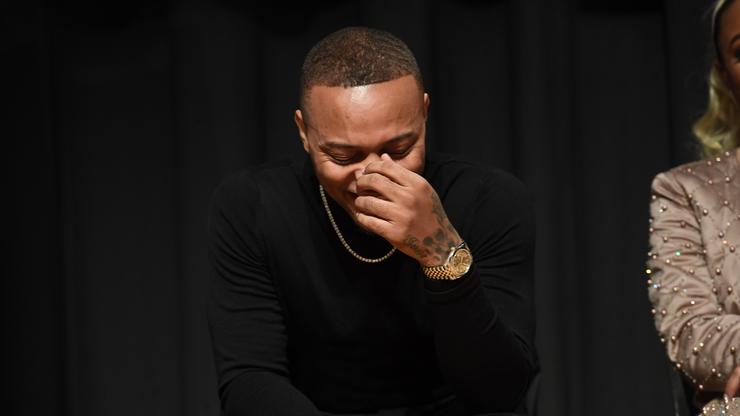 Who could it have been?

Bow Wow hasn’t exactly had the best luck with women in the last few years. He got close to Kiyomi Leslie but we all know how that ended. The two are no longer on speaking terms and Bow is trying to find the right woman for him to settle down with. Having grown up in the entertainment industry, he knows to watch out for potential crazy types but still, he seems to have landed himself in the lap of a window-smashing woman.

The rapper posted a picture today of his Mercedes-Benz G-Wagon but he only showed one part of the whip: the smashed windows. That’s right; somebody took a baseball bat (or another blunt object) and absolutely shattered the windows on Bow Wow’s car. His reaction was far more reserved than you would gather. The man, who previously broke down on the set of his reality show, was understandably pissed about his windows but he brushed it off with some humour.

“Really? So this what you do? you pull up to my place of business and bust the windows out the g wagon? While I’m working? Really…? Come on girl…” wrote the artist on Instagram. He continued with a few hashtags, writing, “#imblamingjazminesullivan 😢😢 #thesewomenoutcheaCRAZY #growup.”

Given his history of faking out the public, some people in the comments are trolling Bow Wow, saying that he’s going to have a hefty bill to pay the rental company. Who do you think is the culprit? 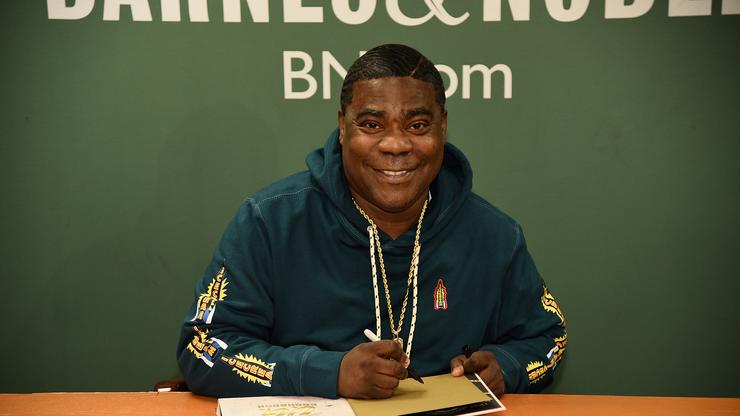 Tracy Morgan Gets Into Accident In New Bugatti 15 Minutes After Purchase: Report

Tracy Morgan reportedly was taken to the hospital after the accident.

Three days ago marked the five-year anniversary since the fatal car accident that left Tracy Morgan hospitalized in critical condition. Unfortunately, today, he found himself in another collision of sorts which thankfully didn’t include any fatalities. According to TMZ, Tracy Morgan’s newly purchased Bugatti was sideswiped minutes after he bought it off of the lot.

A Hondo CR-V sideswiped Morgan’s new 2012 Bugatti Veyron that still had the dealer plates on it in New York City this afternoon. At this point, there hasn’t been anything indicating who’s actually at fault but the footage suggests that the Honda attempted to make a quick right turn at the last second and ended up hitting Morgan’s new vehicle. Morgan reportedly was taken to the hospital after complaints about pain.

A crowd surrounded Morgan shortly after who was talking to the police to likely find out what happened. If it ends up being in the hands of the SUV owner, they’ll have to cough up a pretty penny. The SUV goes for $25K while the Bugatti is upwards of $1.5M.

Morgan’s new vehicle was bought fifteen minutes before the car crash. The vehicle’s already back at the dealership to examine the damage. It doesn’t look like there was any serious damage with the exception of a few cars and scratches but the car is all carbon so you could only imagine that it’ll cost a pretty penny. 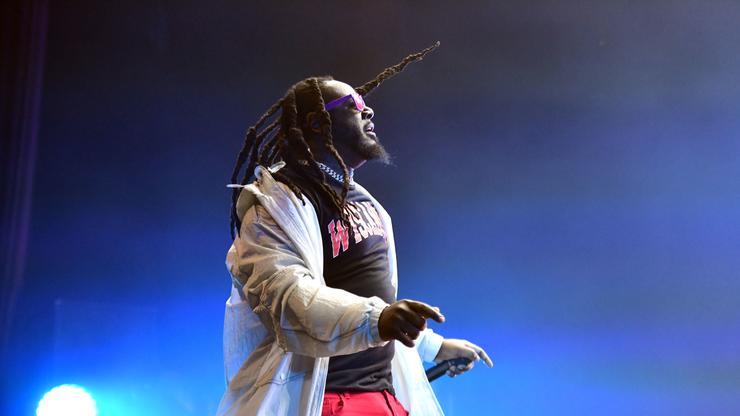 T-Pain is on the verge of permanently damaging his voice, according to his doctor.

T-Pain has been ordered to put his touring efforts on pause, for fear that he might permanently damage his singing voice. The directives were issued by someone T-Pain has relied upon in the past, to give him a solid first and second opinion: his personal GP. "Pizzle" as he refers to himself apparently, clarified the situation in an Instagram post addressed to his fans.

Sorry guys. I’ll be back out there soon," T-Pain writes. "Take care of yourself out there. My apologies to all the schools and venues. I wanna be 100% on that stage and give my all but I wouldn’t be able to in my current condition. Rescheduling is happening as we speak. Thank you for understanding. Again, my sincere apologies. Pizzle."

Within the same post, the 33-year-old singer added video upload to his post to make it more personable. "What's good, man, it's your homeboy T-Pain, fucking obviously," he says in the video. "There's been a lot of work I've been doing. I just got off tour. Sometimes I was doing two shows a day, entertaining the people, going to afterparties, and doing my thing. Just working, working, working, working, working. The truth of the matter is I just haven't been taking care of myself."

T-Pain wraps up the video memo by describing the pain he's felt his throat, prompting the chat with his doctors. While T-Pain's public activity is privy to the same media attention as some of his contemporaries, he does maintain a steady work-rate since his conscious "unretirement." Just last month, "Pizzle" hosted the 2019 iHeartRadio Music Awards, before getting back to the road, and his regular routine.

Take care of yourself out there. My apologies to all the schools and venues. I wanna be 100% on that stage and give my all but I wouldn’t be able to in my current condition. Rescheduling is happening as we speak. Thank you for understanding. Again, my sincere apologies. Pizzle.

The basketball nice sounds off on the recently-fired “Empire” forged member.

TMZ caught up with Charles Barkley as he made his approach over to Ric Flair’s 70th birthday extravaganza. To the sphere reporter’s shock, Barkley was in an unusually somber temper as he expressed blended emotions of contempt and remorse over the Jussie Smollett scandal, to which he’s under no circumstances implicated in any way.

In his impromptu interview with TMZ, Barkley started by crediting Smollett as a really gifted particular person, earlier than passing judgment over his actions – his declare being: Jussie has finished a fantastic injustice to each the LGBTQ and Black neighborhood/ties, of which Charles Barkley holds a distinguishable place within the latter class, not a lot the opposite.

The present TNT analyst additionally talked about that Smollett had finished “immeasurable harm” by allegedly enjoying each side of honor/disgrace tradition, a far cry from the joking method during which Barkley imagined a state of affairs the place an earnest Jussie Smollett ought to have reported to “Liam Neeson’s neighborhood” had he wished to endure an actual hate crime.

As of this writing, Jussie Smollett denies colluding with the Osundairo brothers and is henceforth sticking to his laurels, regardless of all of the damning proof to have surfaced within the public discussion board. Charles Barkley is however one in every of many public figures representing both the LGBTQ or Black communities, who view his actions as a backward step for a collective good.