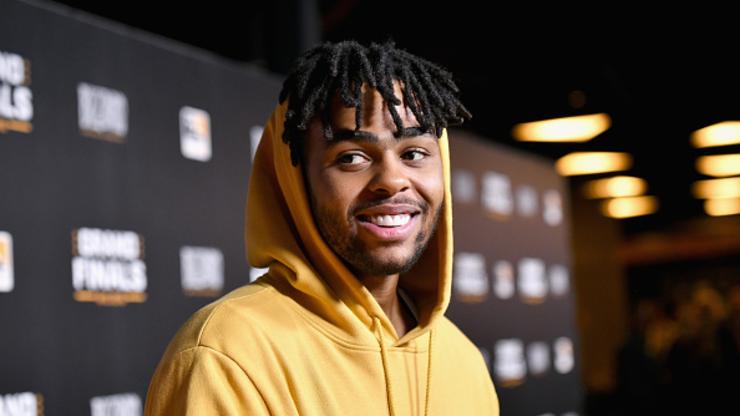 D'Angelo Russell is going with a new (old) number as he begins the next chapter of his basketball career with the Golden State Warriors.

As spotted at the Warriors' Media Day on Monday, Russell will be wearing No. 0 next season, the same number he wore during his lone season in Ohio State. He has worn No. 1 since entering the NBA in 2015.

Russell inked a four-year $117M deal with the Warriors this off-season, following an All Star campaign in Brooklyn, during which he averaged career highs across the board with 21.1 points, 7 assists and 3.9 rebounds per game while leading the Nets to the playoffs for the first time in four seasons.

Some have questioned where the 23-year old point guard fit in once Klay Thompson returns from injury, but Thompson isn't expected to return until after the All Star break, at the earliest. And when Klay is healthy, the Warriors will have a three-headed monster of a backcourt.

During a recent interview with HoopsHype, Russell envisioned what it will be like when the trio of All Stars are in full swing.

"I think it's like a video game. You got three guys who can shoot the three at a high clip," Russell described to Alex Kennedy of HoopsHype. "I think that's really exciting for the fans. Threes are obviously worth more than twos at the end of the day, so I think it gives us an opportunity to win. I'm so excited, and I think we're going to bring a lot of excitement [to the fans]."

Golden State will open the 2019-20 season on October 24, as they host the Los Angeles Clippers at their new arena in San Francisco.