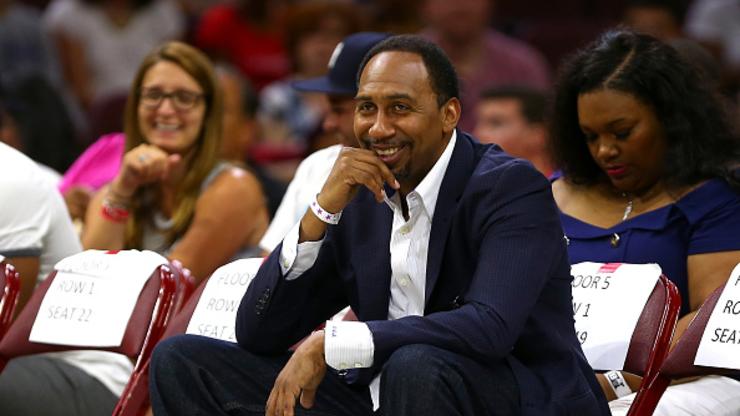 Brooklyn Nets point guard D'Angelo Russell was busted before his flight from NYC to Louisville on Wednesday night, after TSA found some weed stashed in his luggage. It's not a big deal to most - Russell has already gotten support from former NBA player and noted weed advocate Stephen Jackson - but still an embarrassing situation that could have easily been avoided.

And when it comes to athletes getting busted for weed, you can always count on ESPN's Stephen A. Smith to go off.

Stephen A. shared his quick reaction on twitter immediately after learning of the news - but he saved his patented punchline for Friday morning's taping of "First Take."

Russell was ultimately cited for possession of marijuana (under 50 grams) and was allowed to leave. At most he'll likely pay some sort of fine.

The Brooklyn Nets released a statement Thursday afternoon, which reads, "We have been made aware of the situation involving D’Angelo Russell and are in the process of gathering more information at this time."

The 23-year old point guard had a break out year for the Nets this season, averaging career-highs across the board with 21.1 points, 7 assists and 3.9 rebounds per game. He is set for a big payday this summer as he enters free agency, regardless of the airport mishap. Russell was stopped at LaGuardia for stashing weed in a can of Arizona Iced Tea.

D’Angelo Russell became the biggest story in the NBA yesterday when he was cited at LaGuardia airport for stashing weed in a can of Arizona Iced Tea. Considering how he got caught, it’s a pretty embarrassing story that has had plenty of people on Twitter clowning the Brooklyn Nets star. While others choose to make fun of Russell, others are offering him their support. Among those who are standing in solidarity with Russell is retired NBA player Stephen Jackson who has become an advocate for marijuana during his retirement.

Jackson took to Instagram to send a message to Russell, explaining how he should have been smarter and that as a whole, weed shouldn’t be so heavily stigmatized.

“Just got my wrk in for the day. Thinking bout @dloading stay strong kid. They rather u take man made stuff so they can benefit. It’s only a prob having it if u successful and black. It’s dam near legal,” Jackson explained. “Who wants to take man made drugs and get hooked then when u stop playing u can get them now u strung out. Sad game the play. #GBG #TMCLove to all. ✊🏿✊🏼✊🏾✊🏻✊🏽 Gotta be smarter DLo but remember it’s a “PLANT” not a drug. Facts. Do your homework.”

Hopefully, Russell takes Jackson’s advice to heart so a situation like this doesn’t occur in the future.