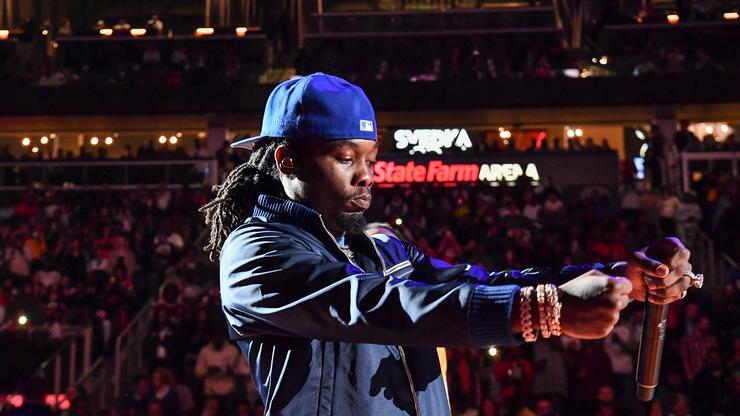 Offset’s Making His Acting Debut On "NCISLA" This Weekend

Offset's getting his feet in the world of acting.

While the Migos have been teasing the arrival of Culture III, there appears to be even more for each one of the members individually. Quavo has been getting ready for Street Bud's takeover while Takeoff recently made a stand-out appearance on Lil Wayne's Funeral. Offset, on the other hand, has been diving deeper into ventures outside of music including acting. CBS announced that he'd be making an appearance on this week's episode of NCIS: Los Angeles while also revealing the Migos member would be debuting a new solo track called, "Danger."

The episode of NCIS: Los Angeles is called "Alsiyadun" with Offset depicting the character of Kadri Kashan Khan, "an undercover CIA Officer working for years in the Sinai Peninsula to embed himself with the local tribes by smuggling contraband so that he can monitoring terrorist and weapons movements in that region."

LL Cool J, who stars in the show, explained that Offset initially reached out to get involved with the show. For LL, it was important that Offset, who dons a fake beard in the episode, wasn't typecasted. Offset also stated that, much like in rap, he does his own stunts.

"I didn't want to come into acting and be put in this category of, you can be the bad guy all the time," he said. "I wanted to be able to show that I can do anything someone sets in front of me."

Here's a look behind-the-scenes with how it all went down.

Daft Punk, deadmau5, Marshmello… Some of the greatest, most recognizable dance music icons have made it to the top wearing a mask — and the stories behind them are just as intriguing as their aesthetic.

Billboard unmasks some of the world’s most elusive DJs in a new feature story, 11 DJs Who Wear Masks and the Stories Behind Them. From Marshmello’s playful bucket-shaped head to Claptone‘s shiny, golden disguise, from Malaa‘s menacing ski mask to Daft Punk’s robot helmets — these are some of the top masked DJs to ever grace the decks.

Maybe it’s the mystery behind these artists that attract listeners or perhaps we’re all suckers for a good gimmick. But we truly believe these legends living behind their privacy shields are beyond talented and deserve recognition for their music.

Allow us to introduce the artists behind the masks. Also, check out Billboard‘s full snapshot here.

1788-L: Not included in the Billboard article, but just as important right now. 1788-L burst onto the scene out of nowhere in February 2018 with a bootleg flip of Virtual Self’s “Particle Arts.” Since then, the mystery producer has released two EPs on Deadbeats, played Red Rocks, and collaborated with Blanke, Rezz, Illenium and more.

Bloody Beetroots: Having previously performed as a duo, Sir Bob Cornelius Rifo heads up the project and the masks have undergone a number of redesigns over the years. Most fans would spot the Venom-like MIDI-controlled LED eyes from a mile away. More recently, his mask has sported message “NO” in plain letters — but the message behind this remains a mystery. What we do know is that Rifo couldn’t give two shits about fame.

Claptone: Claptone has gained massive recognition in the techno scene, though his identity remains completely unknown. According to Billboard, the mask is modeled after Black Death “beak masks” worn by Medieval doctors during the Plague of 1656. The reasoning behind the mask seems authentic — “We all wear masks,” Claptone once explained to DJ Mag. “The single purpose of being Claptone is to touch people.”

Daft Punk: When you think of masked DJs, this dynamic duo is probably the first that comes to mind. Created by special effects artist Tony Gardner, these helmets were truly ahead of their time and transformed Thomas Bangalter and Guy-Manuel De Homem-Christo into robotic, dance music heroes. Just try to name a more iconic masked duo — we’ll wait.

Danger: From one masked dance act to another, the disguise for this project was inspired by none other than Daft Punk and their robotic helmets. However, he based the distinct look off a character from Final Fantasy. Franck Rivoire’s lifelong obsession with comic books and video games translates into music and design seamlessly with his black mask and glowing eyes. Putting this on, he becomes his alter ego by night and appreciates the “absence of expression” it holds.

Kloud: This mystery project claims to be a source of artificial intelligence. The backstory plays out through music videos, as the music entity breaks free from the evil grips of Kloud (a corporation that thrives off mining the intelligence of mankind). This narrative boasts a cyber world of self-expression and truly endless possibilities. The future is now and there’s no telling what kind of masked DJs we’ll encounter next.

Malaa: Who is Malaa? The world may never know. This guy never talks on the mic or breaks character under any circumstance. Closely associated acts like Tchami, DJ Snake, and Mercer aren’t letting on either. His mystery identity counters his instantly recognizable ghetto house flair, which has taken over the scene along with his “bad boy” image. Malaa’s straight up black ski mask is in line with popular street wear and has even become a staple in his merchandise line.

Marshmello: From mystery DJ to global sensation, Marshmello is living proof that even the simplest of masks can take a brand to the next level. His manager, Moe Shalizi, says it stands for something much deeper — a universal message of acceptance. The same theme plays out in many of his music videos. Nevertheless, the mask can be attributed to much of Marshmello’s success.

Noise Cans: This distinctive mask is a strong nod to the artist’s Gombey tradition and represents a mix of African, indigenous peoples, Caribbean and British cultures. His fondest childhood memories involve running to the streets to hear banging drums and dancing for hours. During these celebrations, the musicians would wear similar masks and headdresses. The project name and look upholds these memories. “The mask is culture, vibe, energy,” he says. “It allows you to create and feel as free as you want to be.”

SBTRKT: The neon-tribal mask references this London-based artist’s childhood in Kenya, meant to bridge old cultures and new. Building off colors, patterns, and messages from ancient societies, SBTRKT presents a vibrant identity all his own. However, just as elusive as the project itself, the designer and visual art director behind the mask remains anonymous.

Slow Magic: This DJs tribal mask is friendly and approachable — your real life “imaginary friend.” Slow Magic is known for jumping into crowds to drum in the pit during his live, interactive shows. Removing his identity from the mix, there is a certain type of magic happening here, allowing fans to focus on the music. The artist behind the mask believes escape is a form of expression.

As of today, we’re officially into the second half of 2019 and it’s been a wild year already. In terms of festivals, we’ve already had Coachella, Ultra, EDC, Bonnaroo, Electric Forest, Governors Ball, and others. In terms of releases… well there’s just too many to count.

But when it comes to full LPs from electronic artists, the list becomes a lot more manageable. Many artists have dropped albums already this year, some have pushed their releases back, and others have come out of nowhere with an entire release ready to go.

In no particular order…

Louis Futon – Way Back When

Kill Paris – Galaxies Within Us

Delta Heavy – Only In Dreams

MUST LISTEN: Danger Drops The Best EDM Album Yet This Year

It took Danger 10 years to launch his debut album, but it surely appears now that dam is damaged and we’re getting extra of him than we’ve ever dreamed. Two years after releasing his album Taiko, Danger is again with Origins, revisiting his roots.

If the album sounds nostalgic, that’s by design. Many of the tracks are unreleased from again in his MySpace-era days — followers will little question discover “88:88 Stage three” within the tracklist, a comply with as much as the monitor “88:88” from his 2009 EP 09/16 2007. And even past that, separate from Taiko, the brand new album appears to be much less about making a world throughout the music and extra about evoking recollections from the previous. One may say, an easier time…

Longtime followers of Danger are going to like this album, as he brings again so most of the soundscapes, melodies, and buildings that made him an underground phenom from 2007 to 2014. New followers are certain to like this album as properly, as nobody else is de facto pushing this sound; and in an ecosystem of regurgitated and repeated sounds, any new expertise goes to be lauded.

The album is fully instrumental and resembles online game background music for essentially the most half, making it the proper option to placed on when it's good to get to work or simply zone out. Then once more, perhaps simply flip the lights off and put some headphones on, and get misplaced within the nostalgia.

Check out the brand new album Origins from Danger beneath.

Everything We Know About Deathpact & The First Single "Danger"

Deathpact is a name many didn’t recognize when it showed up on the tracklist for Rezz’s new album. A collaborator on the track “Life & Death,” Deathpact remains a mystery. However, some recent revelations have begun to spin a web of intrigue that should eventually lead to more information and more banging music.

Ten days ago, a website appeared that was a supposed ARG (alternate reality game). Users on reddit struggled to find the hidden meaning and pages of the website, but on the site’s page now, it lists a number of users who have seemingly made it all the way through. It also lists what seems to be a reddit directory, “r/Blue_square,” but no such directory currently exists.

There have also been a number of sightings of Deathpact posters across the country, from LA and San Francisco to New York City, with various cities in between. The sightings have either been full poster walls, or stickers covering the faces of ads already presented.

And finally, the release of Deathpact’s debut single “Danger” five days ago. The track has an obvious dark and ominous tone, which is no surprise given Rezz’s choice to collaborate. With Rezz’s album just around the corner, we don’t expect another single in the meantime, but we’re sure we’ll be hearing more from Deathpact soon after.