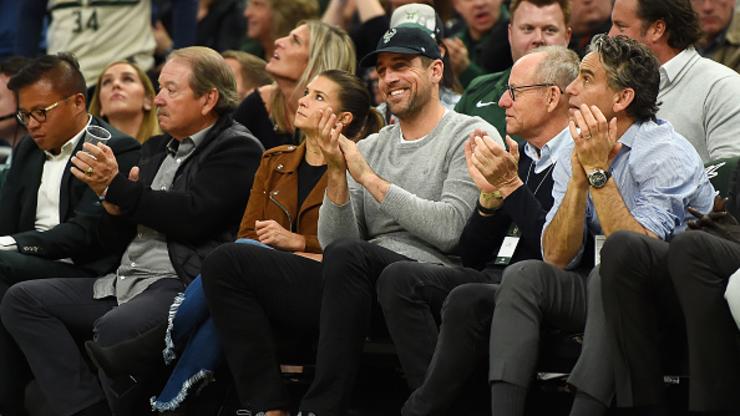 Danica's money is no good in Wisconsin.

Danica Patrick and Aaron Rodgers were court side for Game 5 in Milwaukee last night, as their Bucks crushed the Boston Celtics to advance to the Eastern Conference Finals. The sports power couple have been a fixture at Bucks games during their post-season run, and fans have surely taken notice.

During Wednesday night's TNT broadcast, cameras panned to the court side celebs just in time to catch an opportunistic fan shooting his shot at Rodgers' girl. The fan, who was seated behind Patrick and Rodgers, served the NASCAR star a drink and refused to take her money for it making for a pretty awkward moment. He even threw in a drink for Patrick's friend - but nothing for the Packers QB.

Everything else was smooth sailing for Bucks fans last night, as Milwaukee coasted to a 116-91 victory behind another stellar performance by MVP candidate Giannis Antetokounmpo. The Greek Freak finished with a game-high 39 points to go along with 16 rebounds and four assists in the elimination game.

The Bucks and their fans will now await the winner of the Toronto Raptors vs Philadelphia 76ers series, which Toronto currently leads 3-2. Game 6 of that series, taking place in Philly, is scheduled to tipoff at 8pm ET tonight, airing on ESPN.