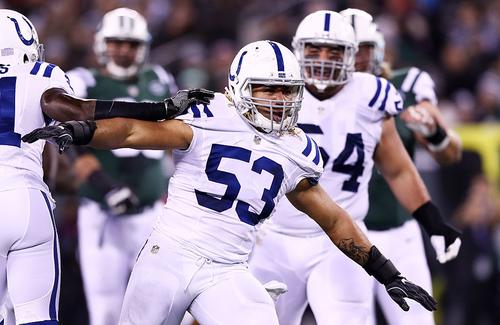 Trump: “So Disgraceful” That Colts LB Edwin Jackson Was Killed

Indianapolis Colts linebacker Edwin Jackson was struck and killed by a pickup truck early Sunday morning while standing on the shoulder a highway in Indiana. The driver the vehicle, 37-year-old Manuel Orrego-Savala, is a Guatemalan citizen who had been living in the U.S. illegally. Officials believe he was drunk at the time the accident and tried to flee the scene.

President Trump took twitter this morning to release the following statement about Jackson's death, in which he called on Democrats to "get tough" on illegal immigration.

"So disgraceful that a person illegally in our country killed @Colts linebacker Edwin Jackson."

"This is just one many such preventable tragedies. We must get the Dems to get tough on the Border, and with illegal immigration, FAST!"

"My prayers and best wishes are with the family Edwin Jackson, a wonderful young man whose life was so senselessly taken. @Colts."

According to ESPN, Orrego-Savala, had been deported in 2007 and 2009 and was living under the alias Alex Cabrera Gonsales. He is being held in the Marion County (Indiana) jail while the police work with U.S. federal immigration ficials.

Orrego-Savala had a blood alcohol level 0.239, according to reports, which is almost three times the legal limit 0.08, when he drove along the shoulder Interstate 70 in Indianapolis and hit Jackson and ride-sharing operator Jeffrey Monroe, who had pulled over to help Jackson. Both were pronounced dead at the scene.