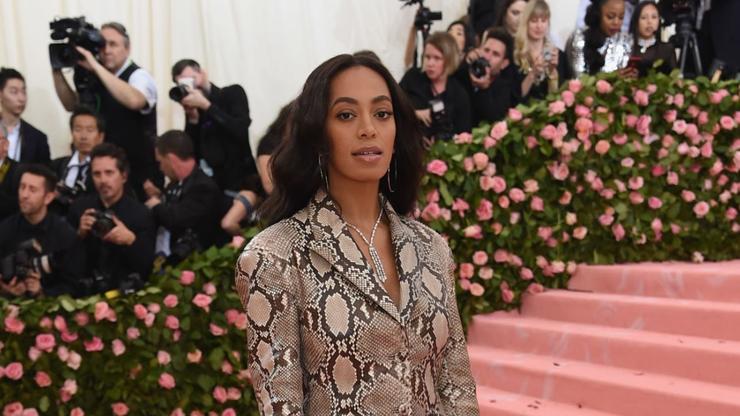 It was a “Stilettos” kind of night.

Five years ago, the Knowles sisters and Jay Z were the centers of the infamous “a billion dollars on an elevator” Met Gala controversy that showed Solange and the New York rapper engaged in a physical altercation. All is well on the homefront for the three family members, and since then Solange has returned to the Ball’s red carpet to showcase her high-fashion styles without incident.

On Monday, the Met Gala’s “Camp” theme brought outrageous and extravagant displays of fashion, and while Solange usually is an active participant of the event, the When I Get Home singer dressed-down in a python skin Salvatore Ferragamo ‘fit with matching thigh-high boots. Solange looked demure as she posed for photographers on the red carpet, but that was a far cry from her Met Gala after party that was Turn Up Central.

In all of their “Knuck If You Buck” glory, Solange called on Diamond and Princess of Crime Mob to perform at her post-Gala shindig. The Houston singer shard clips of the ladies onstage in front of a hyped crowd that almost drowned them out from singing along so loud. Diamond also shared the video on her Instagram page and wrote, “LAST NIGHT WAS MAD REAL QUEEN 👑💚💚💚@saintrecords 🙌🏽🙌🏽🙌🏽🙌🏽 THANK U 💃🏽💃🏽 FOR HAVING US———- @princessdigital We Did DATTTTTTTTTTT.” 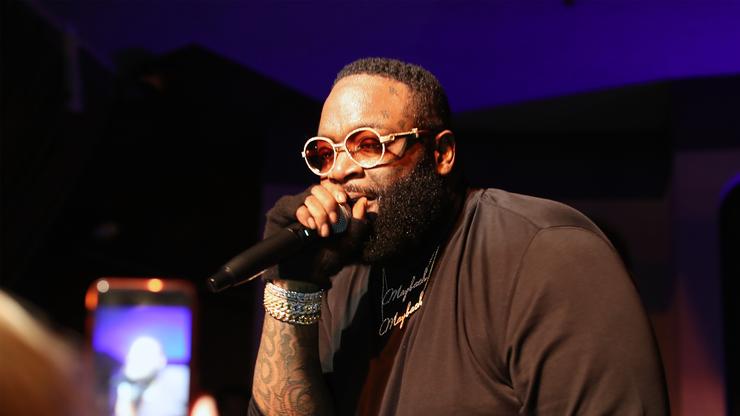 Nipsey Hussle carried around positive energy everywhere he went and you can see that from the way people have been reacting to his death. At the young age of 33, Hussle was shot dead in front of his shop on Crenshaw and Slauson, which is where he grew up. The majority of the hip-hop world has been grieving his loss with OGs and newcomers alike feeling horrible for his family and friends. Rick Ross previously showed off his new tattoo, which honors the late Nipsey Hussle but that's not the only way that the Florida icon plans to keep his legacy alive.

While this may not be as permanent as the marking on his skin, Rick Ross will have a constant reminder of Nipsey Hussle every time he travels between floors in his house because the outside of his elevator doors has a picture of the rapper plastered on them. He showed off the new decoration on his Snapchat page, telling his fans that the Marathon continues.

Rick Ross hasn't been alone in offering daily reminders of Nipsey Hussle's legacy online. T.I., The Game, and YG have all been contributing to the cause, posting regular photos of their homie to keep him fresh in everybody's minds. Take a look at Rozay's latest tribute below.

YBN Almighty Jay was on the dropping finish of a shakedown, just a few weeks after enjoying the aggressor.

All the indicators are pointing in the direction of YBN Almighty getting jumped within the Big Apple someday final night time. Various social media channels are circulating footage depicting what seems to be YBN Almighty Jay face down on the bottom, after getting by rushed a mob of seasoned New Yorkers.

While data regarding the incident stays sparse at the moment second, the footage shot by the aggressors is definitely fairly telling, if not incriminating on either side.

As you'll be able to see within the above video clip, YBN Almighty Jay is just minding his personal enterprise when somebody on the opposite facet of the road spots him out, screaming, "is that the YBN n***a? Take his chain!" After which, the video's narrator, consequently the group's ringleader too, begins speaking about an alleged altercation that passed off in an elevator someday up to now.

After being noticed within the lifeless of the night time, YBN makes a run for it, developing brief, as a result of as soon as the video cuts and resumes, the exact same narrator is shut as much as the motion, instructing his pals/friends to gather the rapper's chain. One of the aggressors kicks YBN sq. within the brow, forcing him to scurry to his toes.

The video cuts once more to YBN's pants falling down, with the assailants fast to scoop up all of the self-importance gadgets on his individual. Coincidentally, only a few weeks in the past, YBN Almighty was on the opposite finish of a skirmish similar to this one. In that occasion, New Jersey rapper Skinnyfromthe9 performed the sufferer. Stay tuned for updates to the story, if and once they turn out to be accessible.

J.I.D. Gets In Heated Rap Battle With An "Elevator"

J.I.D's proves that anyone can get it, even inanimate objects.

The smoke just isn't reserved for any explicit individual, place, or factor. At least, not within the eyes of Dreamville's J.I.D, who not too long ago discovered himself in an sudden, but totally entertaining rap battle. Before hitting a present on his Catch Me If You Can tour, the Atlanta rapper discovered himself trapped in an elevator for a stable hour. Luckily, J.I.D. nonetheless had telephone service obtainable, permitting him to get in contact with firefighters, who proceeded to deal with enterprise accordingly.

After being launched, JID took to Twitter to discuss the expertise. "We was scared so I used to be mad at y’all for laughing, all I used to be considering was splattttt lol however fuck it now I gotta go rap," writes J.I.D, prompting a response from Dreamville president Ibrahim H. "N***a bar that elevator up my boy. That elevator don’t need the smoke," he writes, ever the motivational speaker. J.I.D, a scholar of battle rap, seems joyful to oblige with a gap volley.

Little did he know, the Elevator was not about to take the disrespect mendacity down. After receiving a number of taunts from J.I.D,  the "Evil Elevator" took to Twitter to clap again. "Next time its me and you do not name the hearth fighters," spits"Elevator." "Oh you say you spit hearth? I suppose ima hearth fighter...its too dangerous you aint have a lighter."

J.I.D. returned with one other heated spherical, prompting a retaliatory, and admittedly clutch verse from his opponent. All the whereas, Ibrahim watched the spectacle unfold, in awe of what he was beholding. "This is one of the best battle of all time," he writes. Luckily, the feud between man and machine was in a position to resolve in an amicable vogue, with J.I.D. and the Elevator's creator continuing to hyperlink up on the live performance later that night time.

Portland Trail Blazers Get Stuck In Elevator Together For 30 Minutes

Team bonding at its best.

Whenever you are in a constructing with a number of flooring, your largest nightmare is probably being trapped in an elevator. I imply, there may be in all probability nothing worse than being trapped in a good enclosure surrounded by folks you both do not know. Thankfully for the Portland Trail Blazers, they have been surrounded by teammates once they bought trapped in an elevator on Tuesday. The staff is in Boston for a recreation in opposition to the Celtics on Wednesday night time and whereas training at Emerson College, Damian Lillard, Enes Kanter, Anfernee Simmons, Meyers Leonard, Evan Turner, Zach Collins, Rodney Hood, and Skal Labissière all bought caught in an elevator collectively.

Both Leonard and Kanter ended up posting movies of the incident to Twitter. While they have been caught within the elevator for 30 minutes, they have been rescued and everybody was in the end okay.

"No one was injured within the incident," Emerson College stated in an announcement based on ESPN. "The College apologizes for the disruption and hopes the staff takes it straightforward on the Boston Celtics (Wednesday)."

While it in all probability sucked being trapped like that, the Trail Blazers hopefully used the incident as a chemistry-building train. The Trail Blazers are having a reasonably profitable season thus far with a file of 37-23 which places them fourth within the Western Conference.

Check out the footage of Bow Wow getting in his women face earlier than their battle final weekend.

By now most of you already heard about Bow Wow’s battle along with his girlfriend final weekend. The ATL rapper was arrested final Saturday morning for assault, allegedly hitting his girlfriend, Kiyomi Leslie, a number of occasions earlier than taking her cellphone and locking her inside the bed room of their condo, that’s in response to reviews. Bow Wow was finally arrested and later seen with some critical scratches on his face and chunk marks on his physique in his mugshot, which he says got here from Leslie.

Well some new footage has surfaced early Saturday morning, and it doesn’t look good for Shad Moss. TMZ obtained footage of Bow Wow & Leslie within the elevator of their condo advanced earlier than the battle went down, and its clear Bow Wow was enraged. He might be seen snatching one thing from her, cornering her and getting up in her face as if he eager to get bodily.

The two would go as much as their rooms, which finally led to their bodily altercation and each being arrested for battery. There occurs to be two different guys within the elevator too, however they do not do something however simply stand there.

Check out the elevator footage (beneath) and hold forth within the feedback.