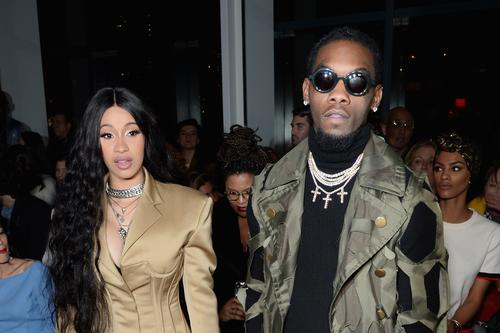 Last week, Offset and Cardi B grabbed our attention when the “Bartier Cardi” emcee gifted her better half with an intricate chain for Valentine's Day, boasting an iced-out design an abandoned house, commonly known as a bando, with two figurines Offset’s likeness inside the miniature edifice. While we know that our favorite rappers are always ready to drop a nice check on a piece jewelry, there was not yet any confirmation on exactly how much this new piece cost.

RELATED: Cardi B: Donald Trump "Out Of His Mind" for Suggesting Teachers Have Guns

TMZ now reports that Cardi allegedly coughed up a steep (to us) $250,000 for Offset’s gift. But such is the case when you’re purchasing from esteemed jeweler Elliott Anne, who is responsible for a portfolio other notable pieces owned by Migos, including Quavo’s Yoda, Ratatouille and Yoda units, Takef’s solar system chain, and Offset’s Freakazoid piece.

Of course, money is no object for the Platinum-selling and Grammy-nominated couple, whose pairing has been subject to a great deal public opinion since they first the nature  their relationship—an opinion that only amplified when Offset popped the question back in October. Since then, headlines infidelity and controversy have riddled the two, but from the looks it, the Cardi B-Offset combo isn’t going anywhere for a while.

"She is real solid, came from where I came from, did what I did. She's herself, man. I seen her develop from the trenches all the way up, and I like how she did it," Offset previously affirmed in an interview with Rolling Stone. "I respect her grind as a woman. She came to the game with some gangsta shit. I like that. I fuck with her. That's my baby."