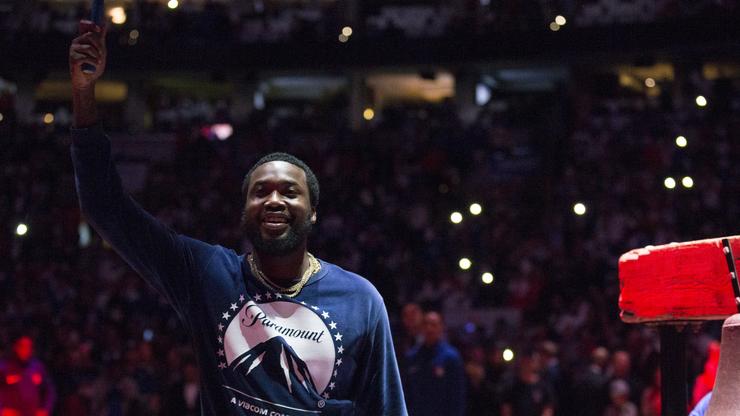 Meek Mill won’t be allowed to travel with his beloved Philadelphia 76ers.

TMZ has learned that Meek Mill won’t be allowed to leave the United States to cheer on the 76ers in Toronto where they face a stiff test from a rejuvenated Raptors team. Upon learning of the matchup, Meek filed a special request to make a one-time trip for Game 1 but was denied by who else but Judge Genece Brinkley, the bane of his existence.

It’s no secret that Judge Brinkley and Meek Mill have dragged their feud to a point of disrepair, so to think she’d rule in his favor, over a basketball game no less, was always highly improbable. But that didn’t stop 76er’s owner Michael Rubin from going in on the judge in a publicly-aired Instagram post this afternoon.

Judge Genece Brinkley – I know you have a vendetta against Meek Mill and are obsessed with trying to control every aspect of his life,” Rubin wrote in his post. “But did you really NOT approve him to go to rep the Sixers in Toronto for the game?”

The 76er’s owner, who doubles as a co-chair in the REFORM Alliance, provided an alibi painting Meek Mill the “good guy” in this exchange. “We filed w/your court as soon as the schedule came out since you need to approve travel to Canada,” he continued in his post. “Since you didn’t respond to numerous phone calls we sent lawyers to your courtroom today which you purposely ignored!!”

The Sixers and Raptors begin their 2nd round series tomorrow night at 7:30 pm ET. Hit us with your thought on the unending Brinkley-Meek Mill debacle, and if you’ve given it any thought, your predictions for the NBA playoff bracket.