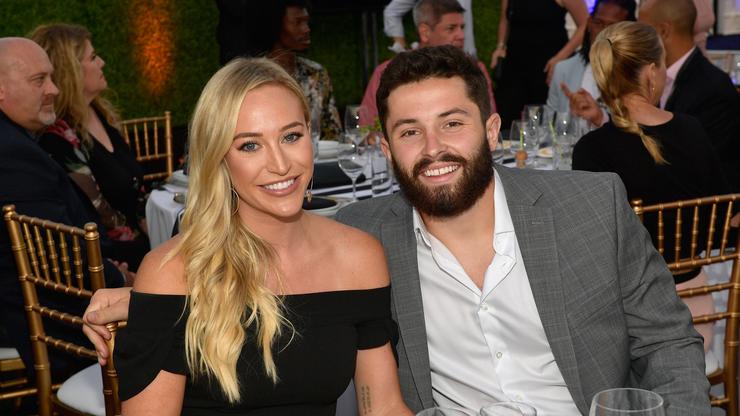 Both Mayfield's despise the media.

Baker Mayfield has had a bit of a love/hate relationship with the media throughout his first two seasons with the Cleveland Browns although there has been more hate than love. Whenever a question is asked that he doesn't like, he is extremely vocal about it and as it turns out, so is his wife. Emily Wilkinson has been Mayfield's ride or die for a while now and after the Brown recent loss to the Pittsburgh Steelers, she took to Twitter to give a reporter a piece of her mind.

Mary Kay Cabot had asked Browns head coach Freddie Kitchens about his "Pittsburgh Started It" T-Shirt and Wilkinson took exception to that, writing "Why is this the focus of your questions? MUCH more to focus on than that." Cabot quickly came back and replied to Wilkinson, noting that she asked Baker the same question and that it was all positive.

When pressed about her stance by a fan, Wilkinson doubled down saying the focus should have been more football oriented. It's obvious she is simply standing up for her husband and his team although the fan and the reporter make a solid point.

What do you think of Wilkinson's response? Was it justified or is this not a big deal? Baker Mayfield Courted His Wife By Following & Unfollowing Her On IG

Mayfield had to beg his now wife to meet him for lunch before the Rose Bowl.

Cleveland Browns quarterback Baker Mayfield has had quite an eventful off-season, filled with major changes both on and off the field.

For one, the Browns went out and traded for star wide receiver Odell Beckham Jr., providing the 24-year old QB with yet another offensive weapon to go along with Jarvis Landry, Nick Chubb, David Njoku and, eventually, Kareem Hunt. Off the field, Mayfield tied the knot with fiancée Emily Wilkinson on July 6.

ESPN's Mina Kimes published an in-depth story about Mayfield today, in which she touched on Wilkinson's initial thoughts about the Heisman Trophy winner and how he eventually got her attention by repeatedly following and unfollowing her on instagram.

The quarterback and his fiancée, who is from Nebraska, were introduced in 2017 by a mutual friend. At the time, Wilkinson was living in Los Angeles. She says she was wary of dating a “punk football player” and ignored Mayfield’s advances for months: He repeatedly followed and unfollowed her on Instagram, trying to attract her attention. Finally, in late December, they exchanged messages. He begged her to meet him before the Rose Bowl, his final college football game. She reluctantly agreed to grab lunch.

“I was assuming he’d be the typical playboy athlete,” says Wilkinson, who is four years older than Mayfield. Because the Rose Bowl was the next day, she thought they’d spend most of their date talking about the game. But it barely came up. Instead, she says, Mayfield spent their entire first date peppering her with questions about herself, her family, her plans for the future. The next day, after Oklahoma lost, ending its season, the quarterback texted Wilkinson and told her he was staying in LA. Three days later, he moved in with her and her brothers. Six months later, Emily and Baker were engaged.

Mayfield and the Browns will kickoff the 2019 season at home on Sunday, September 8 against the Tennessee Titans, followed by a Monday night showdown against the New York Jets at MetLife Stadium.