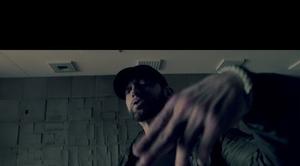 Eminem will never “Fall” in his new music video.

Eminem is phoning in absolutely nothing on his new album Kamikaze. The criticism that was handed down to Revival when it dropped last year cannot simply apply to the secret project Em dropped last week. In fact, with the new video for “Fall,” Shady is leaving Revival far in the past, stepping on the physical copy and completely destroying it in the process.

Opening with Em receiving hella notifications hating on Revival, the mindset that the Detroit artist went into Kamikaze with is finally revealed. While he may brush off the criticism nonchalantly, clearly it affected him in a few different ways, which fueled him to bring back vintage Shady on the new album. Throughout the clip, Eminem teases the idea of literally falling down a few times but he always seems to catch himself, much like he did figuratively with Kamikaze.

Reminding his detractors that he will be in the game after them, much like he was before them, Em considers the fact that he’s a living legend. While this may not be a response to Machine Gun Kelly’s “Rap Devil,” which we’re absolutely waiting on, it’s still some new Em content which will always be welcome. Which tracks would you like to see get some visuals from the new record? 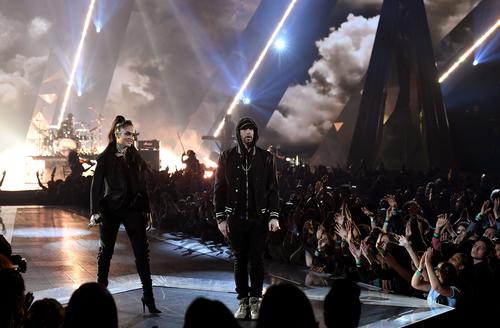 Although he has been rapping for over two decades, Eminem is still very much a leading figure in the world hip-hop. When he releases a project, everybody takes notice and shares their opinions almost instantaneously. Fresh f their joint performance at the iHeartRadio Music Awards, Eminem and Kehlani have been sitting on an extended version the Revival cut "Nowhere Fast," which they are ready to distribute to the world. The song is poised to become Em's next single f the December 2017 album, as the longer version the track will be made available tonight at midnight EST.

Eminem announced the news on his ficial Instagram account, posting the single's cover art and informing his supporters the release time in the caption. Slim Shady simply wrote, "#NOWHEREFAST (EXTENDED VERSION) FT. @KEHLANI MIDNIGHT ET TONIGHT." An artist that regularly tends to keep to himself, Eminem has been sharing more than usual on the social media platform, using the medium to post the behind-the-scenes footage his "River" video, as well as tributes to the late Craig Mack and the victims the Parkland school shooting.

Are you planning to check out the updated version "Nowhere Fast" at midnight? While you wait for the extended version to ficially drop, relive Em's weekend performance the track here. 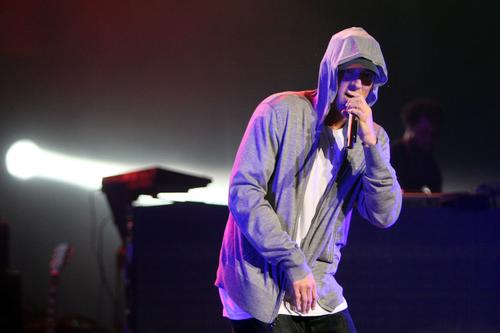 Eminem Shares Behind The Scenes Footage Of "River" Video

Eminem was teasing the video for his Revival single "River" with Ed Sheeran for most the month February and, when it finally dropped, it was an exciting day for fans the song and Slim Shady. The video is nothing like Em has ever done before, as he shows himself to be more vulnerable than ever, with the visuals heavily matching the lyrics the song. Today, Eminem shared a behind the scenes look into the making the video, as his video director speaks about what went into the process.

"When I got the brief, they were very clear they wanted to do something Em had never done before," explained director Emil Nava. Having filmed 14 videos for the Detroit rapper, it may have been a tough task to capture him as never before, but no video director is more familiar with Em than Nava is, and he got it done. Detailing Em's passion to complete an outstanding finished product, the director said, "Working with him has been so special because his dedication, passion and his vision to get it perfect is amazing."

Among the bits Em's video director breaking down elements the production, we also see Ed Sheeran hilariously destroying the set and Marshall yelling as rain pours on him. Check out the full video below as it's truly a must-see for anyone wanting to see Eminem's process.