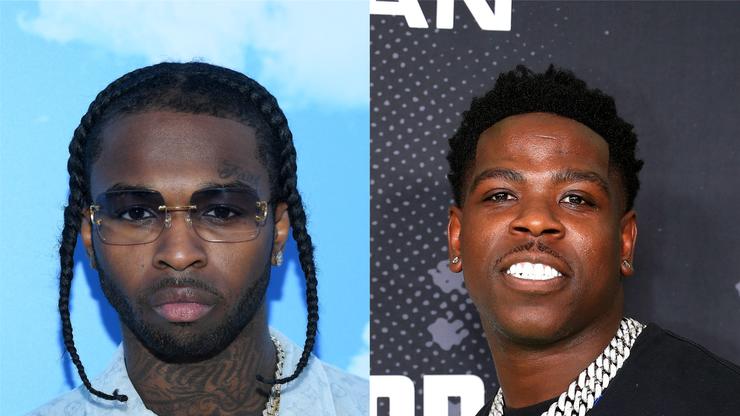 All is good in Brooklyn.

Last week, Pop Smoke and Casanova got caught up in a rather predictable beef. It seemed to have stemmed from Pop Smoke, a burgeoning Brooklyn rapper, declaring himself the “King of New York”. Bestowing oneself with the title has been a recurrent trend throughout the history of hip hop and every time a rapper does it, it incites dissenters. Considering Pop Smoke is still on the come up, fellow Brooklynite, Casanova, was not willing to let Pop Smoke’s bold claim slide.

On Pop Smoke’s newly-released song, “Christopher Walking”, he raps: “She know that Papi outside, she know I’m the King of New York.” It wasn’t only the second half of this bar that Casanova took issue with. After hearing a preview of the track on Pop Smoke’s Instagram, Casanova responded, “STOP USING MY PHRASE ‘WE OUTSIDE’ YEA MY PHASE‼️CAUSE YALL NOT OUTSIDE WE KNOW WHO’S OUTSIDE.” He also tweeted that “NOBODY RUNS NEW YORK IT’S TOO MUCH OUTSIDE N****S TO FRONT LIKE ONE N**** HAS THOSE POWER TO CONTROL THE WHOLE BITY.”

Pop Smoke initially refused to retract his statement about being the “King Of New York”, but he and Casanova have found a way to put aside their differences. Casanova’s latest IG post shows him playfully wrestling with Pop Smoke with the following caption: “BEFORE WE ATE WE GOT SOMETHING OFF OUR CHEST… WHO YALL THINK WON?” Meek Mill was glad to see that the rappers’ heated standoff turned into a friendly one, commenting “G shit” with a ton of trophy emojis.

On Friday, Pop Smoke was arrested for stealing a Rolls-Royce, which was apparently borrowed for a music video. After news circulated that he was locked up, Casanova took to Instagram to advocate for his release. In retrospect, this was the first sign that their beef would be squashed. We will continue to provide updates on that case.

The fracas caused by Daniel Caesar's comments towards Joe Budden was pretty hard to ignore this week, prompting yet another ventricle of the conversation centered around "Cancel Culture." The wreckage his comments left behind impelled a lot of people to think one of two things: that Caesar was defending YesJulz, which wasn't definitively true.

Secondly, was there an underlying message to his controversial statement? Of all people, Joe Budden seems to think so, he'll likely be leading the discussion (if he so chooses) going forward, given his proximity to the situation.

Before digging any further into Daniel's resolution, it's worth noting that Julz and Budden were once friends, but fell out of favor with each other, in a very public manner, as is often the case, when the Mood Muzik specialist is implicated.

So what did Caesar do to rectify the situation? Well. he didn't plead his case to the public a second, that's not in his nature. He didn't arrange for a slot on Budden's podcast with co-hosts Rory & Mal, again not in his nature, even though it's easy to understand why a need for "public vindication" existed in the first place, dating back to the manner in which Dave Chapelle spoke to him in the now infamous "he's gay" video.

Enter Joe Budden with plans to address on the next episode of the aforementioned podcast, the 232nd of its kind titled "Datakiss," a joke he and his cohorts go on to explain at the 39:45 of the taping. Right then and there, Joe Budden reveals the sincere overture Caesar made behind the scenes just the other day. "I was surfing the channels, it was 1 am, I could not sleep," he began explaining. "I got this text from a number I did not have stored in my phone. It said, 'brother,' and that was a little off because I don't even talk to my brothers."

At this point Rory and Mal interject, add a little comedic relief as they usually do, and Budden resumes his story by assuming Daniel's speaking voice. "'Please just make sure you watch the entire clip before you flame me, lol," he reads aloud as if to paraphrase with some degree of accuracy. Then he wraps up the anecdote by insisting that Daniel Caesar signed off on a truce.

"'I know you've got a job to do and I respect it, to a point I suppose, but it's love,'" Budden relays to the listener, that's it that's all. Joe Budden shows no sign of animosity after reading the texts, insinuating the kind of sympathy he mutters at the beginning of the tape. Give it a listen for yourselves.