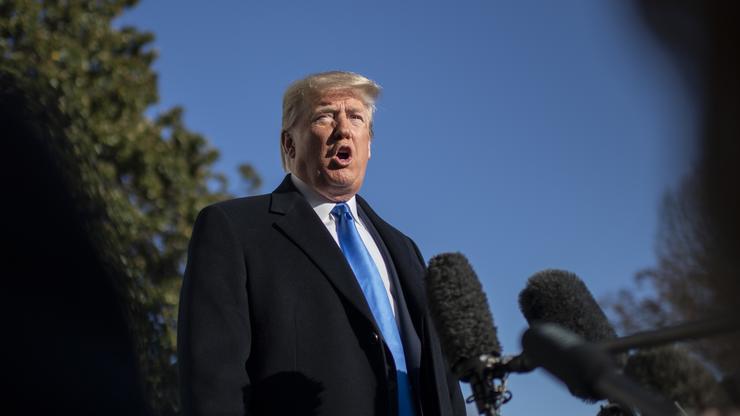 Trump Is Very Concerned About Low-Flow Toilets, Sinks And Showers

Trump's rant about toilets is one for the books.

There are a number of things that Donald Trump says in any given week that elicit confusion and mockery. This week, his speech about low-flow sinks and toilets takes the cake.

During a roundtable with small business leaders about deregulatory actions, POTUS digressed for a significant amount of time to discuss what he evidently considers to be a serious issue. "We have a situation where we're looking very strongly at sinks and showers and other elements of bathrooms where you turn the faucet on -- and in areas where there's tremendous amounts of water, where the water rushes out to sea because you could never handle it, and you don't get any water," he said.

The quote that's being extracted for the majority of headlines covering this story is when Trump claimed that Americans are flushing their toilets "10 times, 15 times, as opposed to once." Many readers are left wondering whether this is truly as rampant an issue as Trump purports or whether the president's personal experience is the source of his concern. It can be interpreted that the latter is the case given the following remarks he made. "You go into a new building or a new house or a new home and they have standards only you don't get water. You can't wash your hands practically, there's so little water comes out of the faucet. And the end result is you leave the faucet on and it takes you much longer to wash your hands."

Wait, there's more to Trump's tirade about trickly faucets. "You turn on the faucet and you don't get any water. They take a shower and water comes dripping out. Just dripping out, very quietly dripping out," the President added, dramatically lowering his voice to evoke the gradual drips.

If you have been forced to flush your toilet 15 times, then you might be relieved to learn that the Environmental Protection Agency is investigating the issue. "They end up using more water. So (the) EPA is looking at that very strongly at my suggestion," Trump said. He thinks the regulations put in place to ensure water conservation are overly strict. "There may be some areas where we'll go the other route -- desert areas -- but for the most part you have many states where they have so much water -- it comes down, it's called rain," he said. "They don't know what to do with it. So we're going to be looking at opening up that I believe. And we're looking at changing the standards very soon."