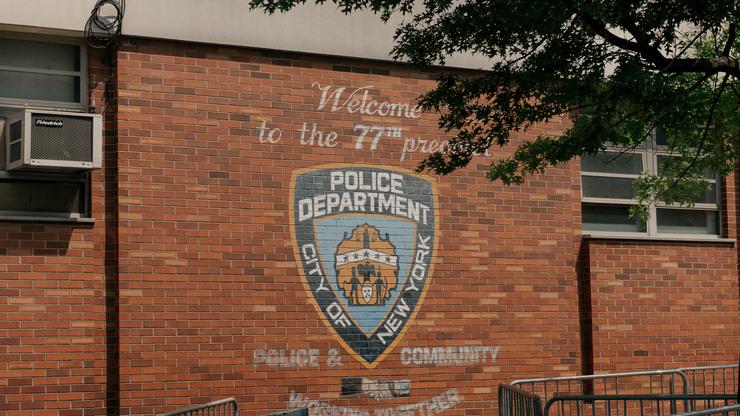 A retired spokesman for the NYPD says “We killed Eric Garner” in a candid new statement.

“In writing this post I’m fully aware that some of my cop friends may call me a traitor, a hypocrite or even unfollow me,” DeBonis wrote. “I’m ok with that because if you don’t agree with what I’m about to say then we definitely don’t see eye to eye when it comes to policing.”

DeBonis then says Garner’s arrest “was legal, the initial forced [sic] used to stop him from resisting was fine, but in the end … WE PUNISHED HIM FOR RESISTING ARREST … WE WATCHED HIM DIE … WE DIDN’T EVEN SIT HIM UP AND RENDER HIM BASIC AID.”

He adds, “It was a horrible injustice that is forever a part of our history. … I’m a hypocrite for saying this now, because I didn’t say it publicly then, but WE ALL need to hold ourselves accountable.”

DeBonis ends his post by ensuring his followers know he stills supports the police: “The Police are NOT the enemy … One bad cop doesn’t define who we are or what we have done for this city … WHAT HAVE YOU DONE TO HELP THESE COMMUNITIES?” 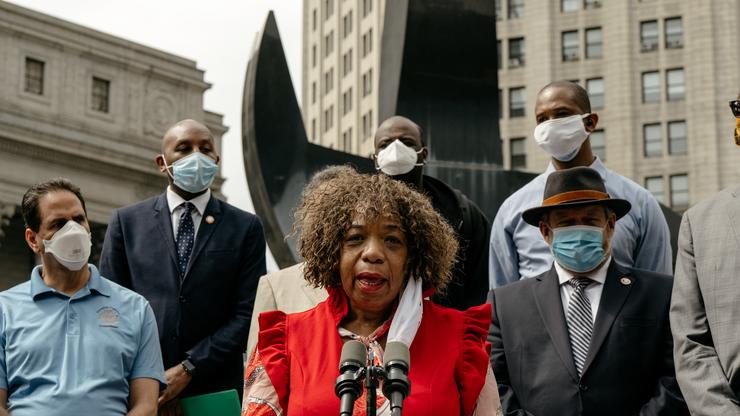 Eric Garner died in 2014, after the police placed him in a chokehold. Now, New York lawmakers have passed a bill criminalizing chokeholds, in Garner’s name.

The last words of Eric Garner, “I can’t breathe,” having become a chilling a reminder of excessive and oft-violent force that is used by police, even when the alleged suspect is unarmed and non-confrontational. Those words re-entered public consciousness when they were repeated, again, by George Floyd as he lay dying at the hands of police officers.

The three simple words now have such a powerful movement them, with many in American banding together to protest the police, and call for action when it comes to reforming the laws that disproportionately target minorities. Since Minneapolis became the center of focus, the city has not only banned chokeholds, but following that, disbanded their police.

Eric Garner’s mother at a press conference on June 2, 2020 calling for a ban on chokeholds – Scott Heins/Getty Images

Now, New York is also taking action when it comes to using chokeholds in the police force. On Monday, the New York State Assembly passed a new act, which Governor Andrew Cuomo will reportedly sign into law, that criminalizes the use of chokeholds that result in injury or death. The law is being named after Eric Garner, who was killed in a chokehold by a police officer six years ago, after being suspected of selling loose cigarettes.

If a police officer kills or injures someone through the use of a chokehold or another form of excessive restraint, this bill would make it so that they can be charged with a class C felony, which is punishable by up to 15 years in prison. 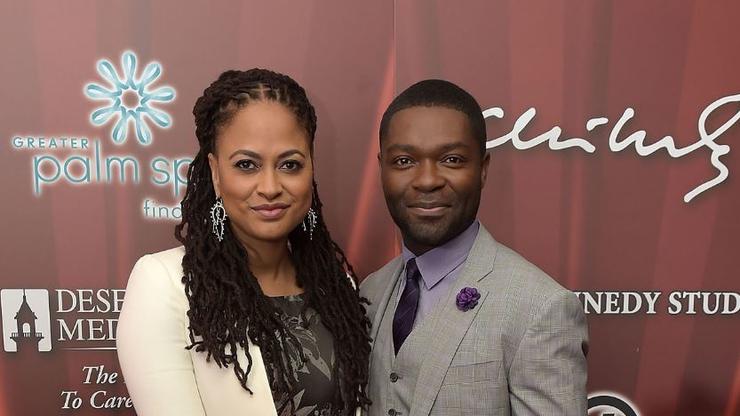 David Oyelowo starred in "Selma" as Dr. Martin Luther King Jr., and he recently shared that after the cast wore "I Can't Breathe" shirts to the film's premiere, upset Academy members pledged not to vote for the movie.

It was a powerful film that dramatized one of the Civil Rights Movement's most poignant moments in history, but Selma was reportedly blackballed by the Academy Awards. Selma would go on to earn Oscar nominations for Best Picture and Best Original Song, with Common and John Legend winning for the latter. However, as well-received as the movie was, the Academy of Motion Picture Arts and Sciences decided not to include the film in any other category. David Oyelowo starred in the Ava Duvernay-directed film as Dr. Martin Juther King Jr., and he recently told Screen Daily's Screen Talks that after they wore "I Can't Breathe" shirts to the movie's premiere, Academy members were angry.

"Selma coincided with Eric Garner being murdered," Oyelowo said of the black man who was choked to death by police as he told them, "I Can't Breath." The actor added, "That was the last time we were in a place of ‘I Can’t Breathe.'... I remember at the premiere of Selma us wearing ‘I Can’t Breathe’ T-shirts in protest," the actor continued. "Members of the Academy called in to the studio and our producers saying, ‘How dare they do that?' 'Why are they stirring sh—?’ and ‘We are not going to vote for that film because we do not think it is their place to be doing that.' It’s part of why that film didn’t get everything that people think it should’ve got and it birthed #OscarsSoWhite. They used their privilege to deny a film on the basis of what they valued in the world."

Later, DuVernay co-signed David Oyelowo's account when she tweeted, "True story." Someone from The Academy acknowledged the story and retweeted the filmmaker with a response that read, "Ava & David, we hear you. Unacceptable. We're committed to progress." Check it out below. 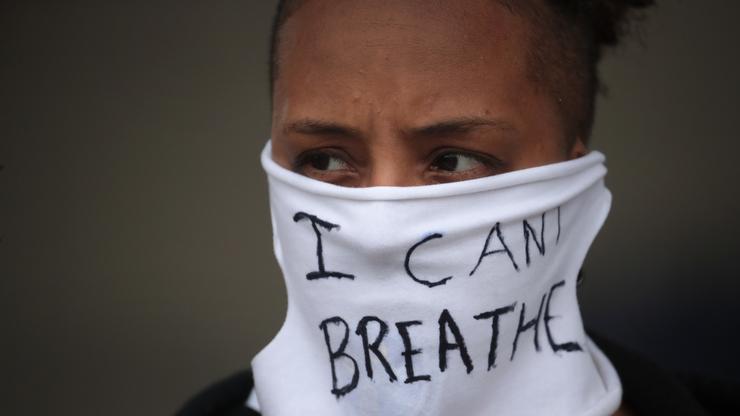 Manuel Ellis died in early March after being involved in an altercation with police, and a medical examiner ruled his death a homicide by physical restraint.

“I Can’t Breathe” police-related deaths are becoming far too common. Eric Garner uttered those words when he was choked to death by officers, George Floyd cried out for his mother and begged an officer not to kill him before making “I can’t breathe” his final words on earth, and on March 3 in Tacoma, Washington, 33-year-old Manuel Ellis said the same phrase as police restrained him.

According to an autopsy, Manuel Ellis died of respiratory arrest due to hypoxia and being physically restrained. He was handcuffed at the time, and the medical examiner also determined that heart disease and methamphetamine intoxication were contributing factors. It was 11:30 p.m. on March 3 when police reportedly saw Ellis attempting to break windows of vehicles and pulling at handles. A police report states that Ellis walked up to the patrol car and told police that he was seeking help. He allegedly also mentioned that he had warrants for his arrest.

Police claim that while speaking with Ellis, he grabbed one of them by his vest. The second officer reportedly exited the patrol car, wrestled Ellis to the ground, and handcuffed him. While it was noted that no batons or tasers were used, nor was a knee placed on Ellis’s neck, he was somehow restrained enough to cause his death. It has not been specified what that restraint was, but it was reported that Manuel Ellis stated, “I can’t breathe.”

The father of two was remembered by his loved ones at a press conference on Tuesday (June 2). “Manny was taken from me, he was murdered,” said Ellis’s mother Marcia Carter. “My heart hurt. I cried for two months and 10 days, every day, all day.” She added that his last words to her were, “Remember, I love you.” Ellis’s death was ruled a homicide and it’s reported that the officers involved in the incident that lead to Manuel Ellis’s death have been placed on administrative leave. 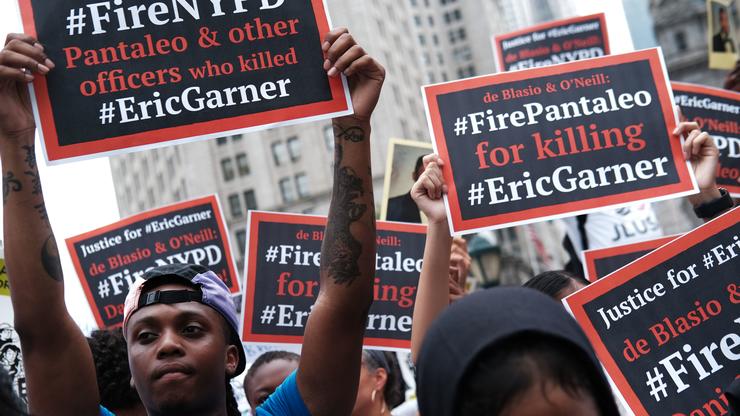 For years, people have been rallying for justice to be served for Eric Garner -- the man killed at the hands of NYPD officer Daniel Pantaleo based on suspicion he was selling loose cigarettes -- but there hasn't been much done. Daniel Pantaleo dodged charges for killing an innocent man after prosecutors said there was "insufficient evidence" that he murdered Garner on purpose. The worst part about it is that they announced he wouldn't be charged just a day before the statute of limitations came out. Five years following the death of Garner and now, Daniel Pantaleo will not be working with the force anymore.

NYPD Commissioner James O'Neill announced earlier today that Pantaleo has been fired from the NYPD, CNN reports. O'Neill said  “examined the totality of the circumstances and relied on the facts" and made his decision.

“In this case the unintended consequence of Mr. Garner’s death must have a consequence of its own. Therefore I agree with the Deputy Commissioner of Trial’s legal findings and recommendations. It is clear that Daniel Pantaleo can no longer effectively serve as a New York City Police Officer,” O’Neill said.

In addition to firing Pantaleo, O'Neill stated that the former officer will not be receiving his pension from the NYPD but he will be given back any contributions he previously made. 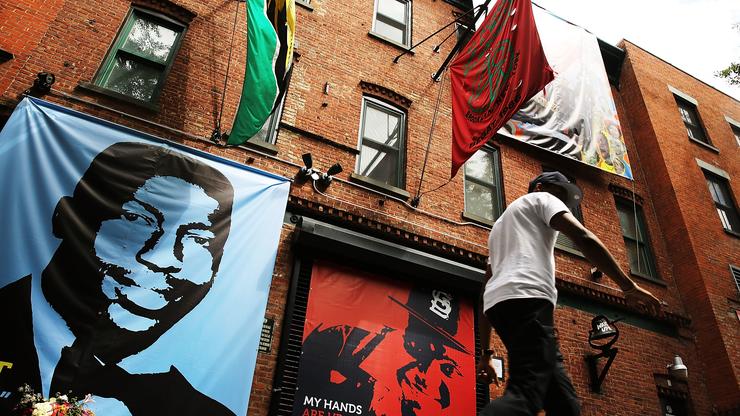 Just a few days after the disappointing news that the police officer responsible for the death of Eric Garner will not be charged, the victim's youngest daughter has taken a stand to fight back. Officer Daniel Pantaleo put Eric in a chokehold back in 2014 when he was confronted by police for selling cigarettes on Staten Island. A video clip shows Eric telling police 11 times that he can't breathe, leading to his death that police ruled a homicide.

Emerald Garner has now launched a petition demanding that Daniel be fired from the NYPD. "My family and I have stood by for 5 years waiting for a decision from the Department of Justice. They asked us to let them “investigate” the murder of Eric Garner. What other evidence does one need to convict a murderer who was filmed in broad daylight killing an unarmed man?! My dad screamed “I can’t breathe!” 11 times. #WeDemandJusticeNow," the petition reads.

"I don't want any apologies. I don't want any condolences. I heard that five years ago. I want justice. We've been quiet for too long," Emerald said in a statement to Change.org, Complex. "I want to spread the word as much as possible that I will not stand for injustice, and that I will do everything I can to get justice for my father, and justice for all of my family members who have fought for five years to hold the officer who killed my father accountable." 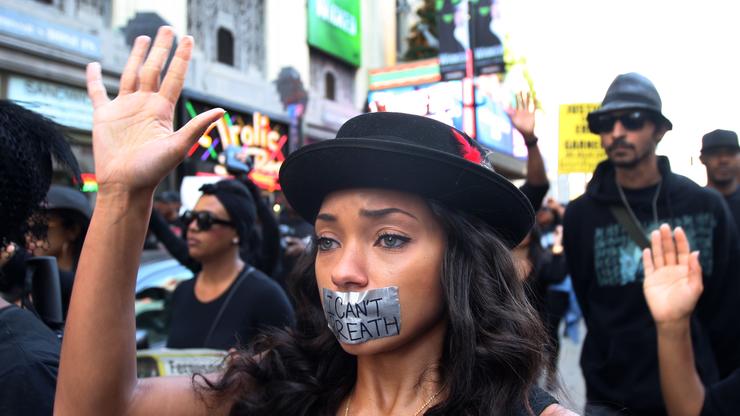 This is happening five years after Eric Garner’s death.

The tragic loss of Eric Garner at the hands of police sparked nation-wide outrage in 2014. The latter served as yet another example which further fueled the enduring fight of the Black Lives Matter movement. Moreover, it the unfortunate event also increased scrutiny surrounding the police’s treatment of Black and Brown individuals. While the words “I can’t breathe” were part of Garner’s final say as the police placed him in a fatal chokehold, they also became the leading chant of protestors when the police officers involved in the case walked free.

A recent report by the New York Times now indicates the police officer behind the chokehold that killed Garner is facing a public trial which may jeopardize his current employment status. To note, officer Daniel Pantaleo still denies any wrongdoing in the Garner case and insist on not having used a chokehold, but instead a police training method called “the seatbelt.”

The trial is set to begin on Monday at the police headquarters. While the city offered a $5.9 million dollar stipend to the family following the dismissal of criminal charges, Eric Garner’s family is still seeking justice. As such, the disciplinary hearing is timely and may somewhat serve as the attribution of police accountability in the tragic matter. Gwenn Carr, Eric Garner’s mother, precisely shared in an interview: “It’s about all of those officers who committed an injustice that day and they all need to stand accountable.”