6ix9ine Has A Feature With "One Of The Biggest Gangstas In Hip Hop": Report

DJ Akademiks says Tekashi 6ix9ine has a major feature with one of the biggest gangster rappers.

It’s been chaotic watching Tekashi 6ix9ine‘s return to the rap game play out. Initially, it was unclear if he would retain any of his supporters but, after debuting his comeback single at #3 on the Billboard Hot 100, that much was proven false. It did not seem to be plausible, given his status as a snitch, that he would be able to secure any features on his tracks but, this week, both Akon and Nicki Minaj were confirmed to be working with him. Apparently, they’re not alone.

Tekashi 6ix9ine’s close friend DJ Akademiks has started teasing another major feature that the rapper has secured, but he’s not giving away the artist’s identity. The only thing he is saying is that we’ll all be surprised by who it is.

“If this [Nicki] collab shocked them… can’t wait till u put out the collab u did wit one of the biggest gangstas in hip hop that’s gon break the net,” wrote DJ Akademiks in an Instagram comment.

Who do you think he’s referring to? The first person that comes to mind is 50 Cent, but he has previously claimed that he will no longer be associating with the rapper. Another possibility is Casanova, who the rapper got close to before getting locked up.

What do you think is coming up?

His 13th studio album, which dropped in January, has added eight new tracks, including features from Benny The Butcher, Conway The Machine, Doja Cat, and Tory Lanez.

The Young Thug and DaBaby features that were cut from the original Funeral didn't make the second cut either.

Wayne kicked up some controversy today with his comments on the killing George Floyd.

Are you feeling the new Funeral (Delux) tracks? Yung Lean speaks on what happened to his “Starz” feature from Playboi Carti.

At the end of last week, Yung Lean made a return with a new album, Starz. The album only contained one feature from Ariel Pink on the title track, but this could have been different– in an alternate reality, Starz would also contain a feature from the ever elusive Playboi Carti.

The two were first spotted together in the studio, teasing a snippet of a collaboration, back in January, amping up excitement among fans of both outlier rappers. Given each artist’s respective cult-like followings, we could only imagine the type of streaming power these two would amass. Nonetheless, it appears that label politics got in the way– as they often do. Lean shared a message of thanks to his fans post-Starz release, as well as the collaborators and people who helped make the album happen. Among those receiving his appreciation, was Carti. In reference to Carti, he revealed that it was neither his nor Carti’s decision to remove his verse from the album: “It was his label that removed his verse cos politics, not me or him,” he stated in his caption.

He wrote in the full caption, “Yoo I jus wanna say a big thank u to all my fans and Every1 involved in this. I love this album n proud of what we did . Wouldn’t be possible without, Whitearmor my big brother & Sherm my love, Ariel Pink, Carti( It was his label that removed his verse cos politics, not me or him ) All the Studios in Portugal, Sweden(Falun,Gnesta) La , Year0001, all dat , Sadboys forever Xoxo Leandoer.”

We’ll have to see if this collaboration will surface at a later date. The 14 track tape, which Drake's describes "as some leaks and some joints from SoundCloud and some new vibe", features Giveon, Young Thug, Future, Fivio Foreign, Sosa Geek, and Playboi Carti.

That's not all.  Drake also announced today that his sixth album will be coming this summer.

Ya feeling this bonus Drake? Thanks to DaBaby’s Ashanti-featured song, “Nasty,” entering the Billboard Hot 100, the R&B singer officially has an entry in the chart from each of the last three decades.

DaBaby‘s song “Nasty,” was making waves before it was even released due to its sample of Ashanti‘s 2002 hit, “Baby,” and now, its earned the R&B singer an entry in the Billboard Hot 100 in each of the last three decades (2000s, 2010s, 2020s). Ashanti is certainly not a newcomer to the music scene, having launched her career nearly two decades ago and going on to become one of the most renowned female R&B artists of the early aughts. Although she was arguably in her prime in the early-to-mid 2000s, she continues to make music up to this day, and her latest Billboard feat proves that she’s got major staying power.

Ashanti had plenty of hits on the Hot 100 in the 2000s, with her single, “Foolish,” off her self-titled debut album and her collaboration with Ja Rule titled, “Always On Time,” both peaking at No. 1 in 2002. “What’s Luv?” with Fat Joe made it to No. 2 that same year, as did another Ja Rule joint called, “Rock Wit U (Awww Baby).” A myriad of her other hits made the Hot 100 from 2002-2005, along with a few entries in 2008-2009. Her only entry in the 2010s was “Start This Sh*t Off Right” with Lil Wayne and Mack Maine, which peaked at No. 76in 2018. So far, “Nasty,” which also features frequent DaBaby collaborator, Megan Thee Stallion, is her only entry in the 2020s, but the decade is still young. Congrats to this talented artist on her impressive accomplishment! 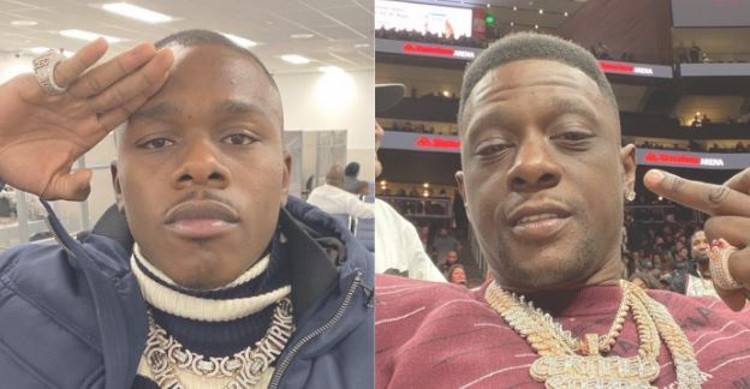 Boosie Badazz Reveals What DaBaby Paid Him For a Feature; What He Charges Now

Boosie Badazz and DaBaby's relationship goes back to when Baby paid Boosie 15K for a verse he put on his 2016 track "Baby Jesus".

DaBaby has come a long way since then and during his Vlad TV interview, Boosie and Vlad agreed that Boosie's verse helped him become the star he is.

While Boosie usually charges 15K a verse, he said he's doing features for 7K these days to help artists whose bag has been damage by COVID.

As for DaBaby, Boosie shares something else with the upstart: A lawyer.

"Baby was going through a lot of shit trying to get to the top," Boosie explained. "Still going through it to this day. But he got my lawyer now, so ya'll muthaf*ckas in trouble."

Lile Boosie, DaBaby got into hot water for killing a guy.  Like Boosie, his lawyer took care of things. Ashanti’s Latest Thirst Traps May be Her Thickest

Ashanti is among the features on DaBaby's new album Blame It On Baby.

Around the way girl.. Last week, Lil Wayne surprised everyone when he said Lil Baby is his favorite rapper.

In the past, Wayne has had trouble acknowledging any rapper that has come up in the last five years even exists.

Now he has expanded on why he is such a fan of Lil Baby.

“I was in a session with him before. He heard a beat come on out of the blue that I was working on," Wayne said on Matt Barnes and Stephen Jackson's podcast.  "It was an uptempo beat. It was probably a feature for somebody. Baby was like ‘I couldn’t even begin to rap on no sh*t like that.’ After that session, I done heard two or three songs like that come out that he done did. I was like, ‘See, he went right back and figured it out.'”

Lil Baby has referred to Lil Wayne as the GOAT so the feeling is mutual.

Do you agree that Baby is one of the best? This could be a game changer.

We’ve all probably done it, sent a text message to the wrong person. Whether it was a drunk “u up?” text or accidentally saying something to your family group chat, most of us had endured the dreaded wrong text before. Well, luckily for us, we may not have to worry about that for much longer. According to MacRumors, Apple is reportedly testing a new feature that will allow iPhone owners retract messages sent through iMessage. However, since this would be an iMessage feature, this capability would likely only work when sending texts to another iPhone, iPad, or Mac user — not those using Android devices remember.

The logistics aren’t yet revealed as for how long you would have before the text was officially sent. On Google's email service, you can adjust your settings to choose whether you'd like to have the option of rescinding an email five, 10, 20, or 30 seconds after it's been sent. So I’d expect something similar to that concept.

It's one of several updates Apple is reportedly testing for iMessage, which may arrive in the company's next major iPhone update, expected to be called iOS 14. Other features Apple is reportedly testing include a typing indicator for group chats, aka those little dots you see when someone is typing, as well as a mentions feature for tagging other people in a group message.

Apple didn’t respond to the rumors, but we’ll be sure to keep you posted if confirmed or more info comes out. Stay tuned. After all of the years and all the drama, Lil Uzi Vert's sophomore studio album Eternal Atake is finally here and it even came a couple of weeks early.

The 18 track project only has one feature, Syd.

What do you think Eternal Atake is headed for?