It doesn't take long for 42 Dugg  to take a dig at Young Joc on the Lil Baby cut "We Paid."

Joc has now responded to the cruel call out.

"Think about when I'm out somewhere.  And I like this song.  And the fist verse they say, 'Fore I go broke like Joc' and somebody say 'I don't think it was a diss.' Joc said, and then paused to display how ridiculous not thinking it was a diss was. "The funniest part about that.  I understood.  At the end of the day, like, I'm far from that word.  For real."

Earlier this year, Joc defended himself after being caught spotted driving an Uber.

So he's probably not broke.  Just more of a working man than he used to be. 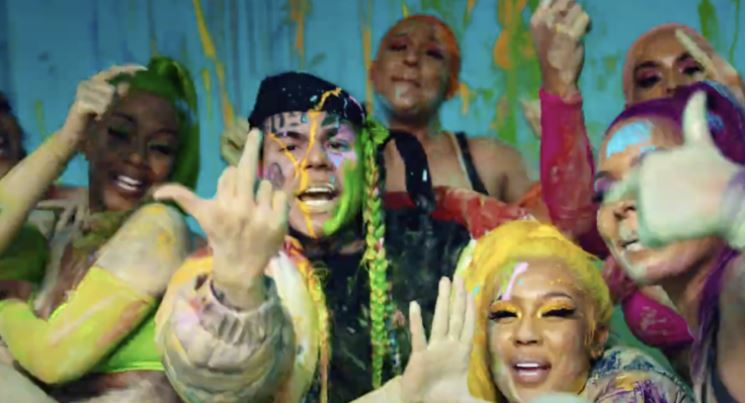 According to Enga, his hold was pulled when 6ix9ine offered to pay him money -- money he ultimately didn't accept.

6ix9ine's team is calling cap on it all.

"We investigated this claim and found that it was fraudulent," 6ix9ine's lawyers told XXL. "No monetary settlement was offered by anyone in our camp."

If "GOOBA" disappears again, you know why.
Posted In: Legal Teka$Hi 6ix9ine

Is Kevin Gates Taking a Shot At Tekashi 6ix9ine?

Is Kevin Gates, who stoically did his time, feeling a type of way about the record-breaking success of Tekashi 6ix9ine?

A tweet the Baton Rouge spitter fired out seems like it could have been directed to 6ix9ine, who notoriously sang for his freedom and has been bragging about being a snitch ever since COVID got him that freedom a little early.

When you entertain a clown 🤡 you become part of the circus!!!! #Healing

"When you entertain a clown you become part of the circus!!!! #Healing," Gates wrote, with the clown emoji 6ix9ine has adopted as his own.

The #healing suggests the message could just be Gates engaging in the type of self-help motivation he's prone to engage in.

What do you think?  Was the timing of the Tweet just a coincidence? While he's no 6ix9ine, Gates has engaged in some pretty clownish antics of his own over the years.

Boosie Badazz Explains Why He Snapped When Asked About Webbie

The once-dynamic duo of Boosie Badazz and Webbie no longer collaborate like they used to.

Not so long ago, Webbie suggested that money had changed his Baton Rouge bro.

Boosie's constant interview companion DJ Vlad has known both Boosie and Webbie since 2004.  He asked Boosie why he got so pissed when Webbie's name was brought up, and Boosie calmly spoke on why he's staying mum on his old friend.

"I can't even talk too much about Webbie because anything I say about Webbie [first] I have to talk to him face-to-face.  We just in two different lanes right now, I got a lot of sh*t going. That's really all I can say about it, I love him to death," Boosie said. "This train ain't derail for nobody.  I ain't falling off the track.  I got to keep working hard.  That's basically the moral of it.  I love him to death, but I gotta just keep doing me." 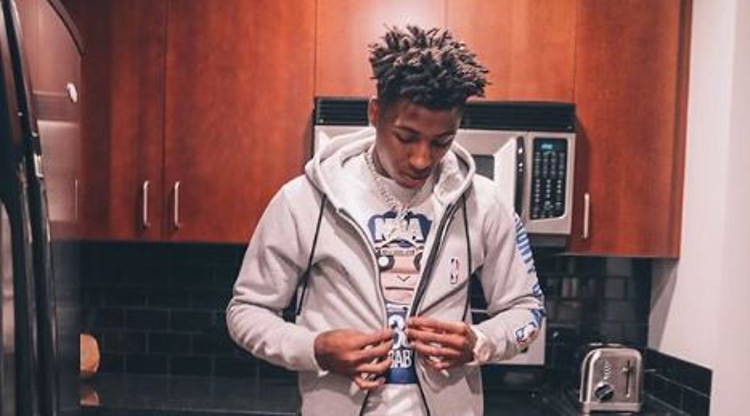 NBA YoungBoy Is Surprised He Isn’t Trolled About Herpes

NBA YoungBoy has been upfront with his herpes diagnosis.

“Herpes in my blood and that shit got me cryin’ / I really got feelings, you see without science,” he rapped last year on "Can't Be Saved."

It hasn't hurt him with the ladies.   Youngboy has females literally attempting murder for him.  But it does make him the butt of jokes, including many hurled at him by this site.

Not everyone is so cruel.  On a recent live session, YoungBoy thinks he's about to be trolled about his STD.  However, he's not trolled.

NBA Youngboy told a fan, ”When you joined my Live, I thought you were going to hurt my feelings and try to say something about herpes.” #hiphop #Jump #yayamayweather pic.twitter.com/yNUfwqxAzQ

"You know, when you jumped on my Live, I thought you were going to hurt my feelings and say something about herpes," the sensitive 20-year-old said, before the fan assured him he wasn't going to go there.

YoungBoy's herpes haven't hurt his album sales either.  His album 38 Baby 2, which is the 23rd project in his short career, is expected to move 75K in its first week, finishing number one on the album chart. 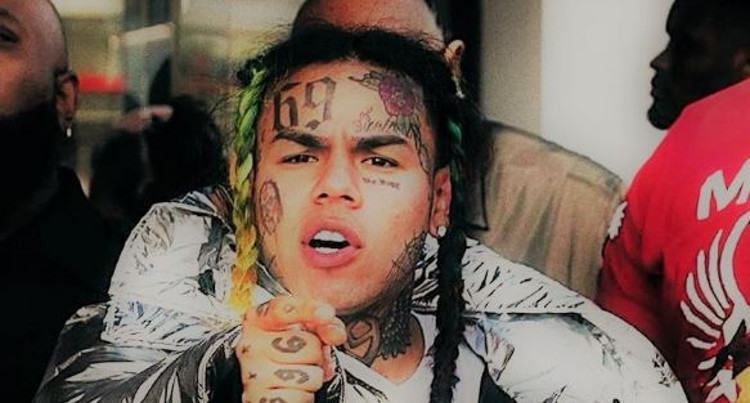 The word is Tekashi 6ix9ine has been hard at work on music since getting his COVID-19-related early release last month.

A snippet of a new Tekashi track called "Bently" has leaked.

In addition to recording music, 6ix9ine has been a shopping spree, buying millions in exotic cars.  According to TMZ, his shiny new rides include a Lambo Aventador, McLaren, Rolls-Royce, Mercedes Benz G-Wagon, and a Range Rover.

No word on whether he plans on adding a "Bentley" to the fleet.

What do you think of "Bently."

Boosie Badazz and Fredo Bang Learn They Are Cousins

Boosie Badazz and Fredo Bang have some things in common.  They are both Baton Rouge rappers with pretty extreme criminal histories.

It turns out they are also cousins.

“It’s a lot of stuff that Fredo don’t know about. Fredo my cousin,” Boosie said. “It’s a lot sh*t this n***a don’t know about. It’s a lot of s**t he don’t know about as far as that situation. I found out he was my cousin by great auntie. She told me a year or something ago. It ain’t no hate or anything like that. Anybody in the city who doing their thing you know I want n****s to blow. I feel like when n****s blow from Baton Rouge. You know, that give us the power to make Baton Rouge the hub like LA, Atlanta and s**t like that. Any n***a who tryna blow, it’s good. I ain’t trippin on nobody. But yeah he my cousin.”

Despite being blood, there's always been some awkwardness between the two, especially when it comes to another Baton Rouge rapper, NBA YoungBoy.

Young Chop has spent the last week throwing stones at half of the rap game.

He's gone extra hard at Meek Mill, claiming he was a "scary" guy who hides behind his security.

Now Chop is claiming Meek was just mad because his girl had topped him off.


"On some real sh*t @MeekMill mad cuz his b*tch suck my d*ck," Chop tweeted. "On my mother that’s why he mad at me and it’s wasn’t Nicki Minaj."

Young Chop's mother passed away in 2016.  Would he lie on her name? A few days ago, G-Unit affiliate Trav caused a stir when he recorded a Livestream in which he accused 50 Cent of using everyone around him and then casting them aside.

Trav was 11 when he started running with 50.  Hassan Campbell knows about that.  He was a pre-teen when he started hanging out with Afrika Bambaataa and his crew.  Campbell would ultimately accuse Bambaata of sexually abusing him. He makes no such allegations against Fif.

But he does seem some parallels between how 50 treated Trav and Bambaataa treated him.

"They would send you on a suicide mission," Campbell said, speaking on his experiences as a young kid. "Beefing with somebody they ain't have the balls to air out.  Then you ask them for a box of pampers for your newborn son and they ain't got it.  But then they go to the club with you and buy the whole club out and get you drunk."

50 then warned if he continues to mistreat folks like Trav and Tony Yayo -- who has allegedly been forced to resort back to drug dealing -- it could bite him.

"With the Feds, there is no statute of limitations.  So you running around and provoking dudes that were in your circle that known your dirt.  The dirt you had them do.  Under RICO law, under the Patriot act, what you was doing was terrorism, with these young boys.  But you pissing them off not thinking that these young boys are still in the streets.  And if they caught up in something they are doing right now they can always revisit the crimes that you had them do.  And you ain't feeding the wolves?  You ain't smart."

Hassan is correct that there is no statute of limitations for Federal crimes involving terrorism or potential capital crimes. Whether that could apply to Fif's past acts is questionable. 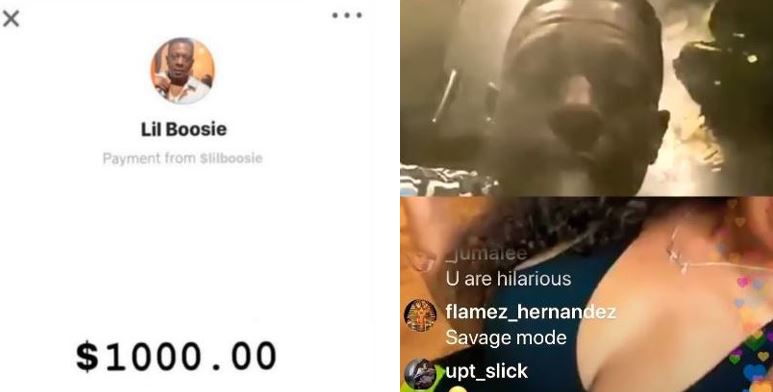 Guy Thanks Boosie Badazz For Giving His Girl $1000 "Randomly"

Boosie Badazz has been getting wild on Instagram Live during the quarantine.

Last week, he was offering to cash app women $1000 if they showed their R and X-rated parts on his livestream.  Sneak that he is, Boosie ended up just giving most of the ladies $25 or $50.

At least one of them got a rack, though.  We know this because her seemingly clueless boyfriend posted the literal receipt.

I'm so thankful that this guy randomly sent my girlfriend $1000 on cashapp😭😭 pic.twitter.com/auhPDYhqBQ

"I'm so thankful that this guy randomly sent my girlfriend $1000 on cashapp," Twitter user Clark typed, with the literal receipt from Boosie.

Y'all think Clark really didn't know what that was for?  Or is he on some of that subtle pimp energy?