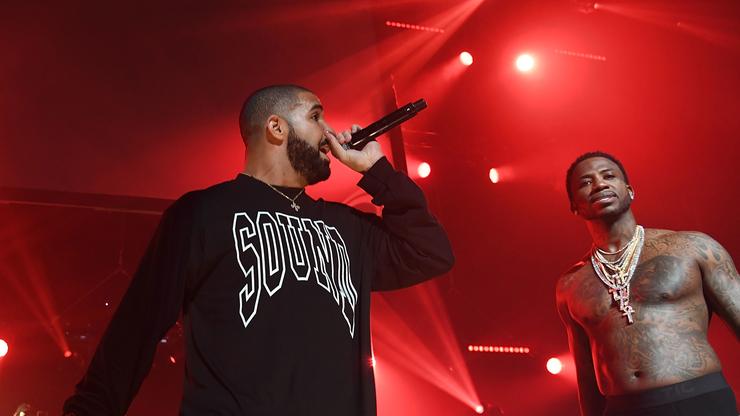 "They let the Wop in Canada," for a tightly contested Game 3 in the Bucks-Raptors playoff series.

Although they entered the tunnel all smiles, Gucci Mane and Drake stood at opposite ends of the Bucks-Raptors rivalry heading into Game 3 of the NBA Eastern Conference final. A day removed from announcing his long-anticipated tour postponed until September, Wop was nevertheless in Canada for the first time EVER - for some good old NBA playoff action.

A regular fixture at Atlanta Hawks' games with Keyshia Ka'oir, Gucci opted for a sensational bandwagon jump with his home side far removed from the playoff picture. His selection of a Giannis Antetokounmpo jersey as courtside attire certainly didn't go unnoticed, but Drake wisely chose to refrain from any eye to eye contact with the man himself.

Instead, Drake focused his attention on the opposition's best player at every given opportunity. Giannis did his darndest to avoid making eye contact with Raptors' brand ambassador until the very end of the contest when Drake's petty wave goodbye was flashed up on the jumbotron for all to see. Gucci's visit to Canada was made possible after a successful attempt at obtaining a work permit after years of idling in (probationary) confinement.

In all seriousness, Drake and Gucci have nothing but reverence for another. The Trap House originator once stated in a song that Drake would be the one to "pull some strings" if ever managed to cross the border into Canada. Back in 1991, Large Professor professed his distrust for the opps in a song titled "Just a Friendly Game of Baseball." In 2019, the NBA has taken the spotlight away from all the other claimants. Hopefully, Drake does the same for Meek Mill, in his sovereign appeal against a vengeful Judge Brinkley.