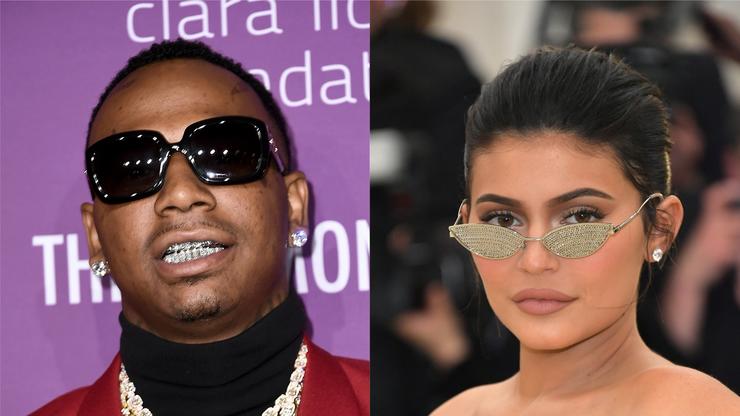 Kylie Jenner Bumps New Moneybagg Yo In The Whip

Did I think I was going to be starting out my Monday morning by stitching together photos of Kylie Jenner and Moneybagg Yo? No, but I embrace the unexpected. Mind you, there’s nothing too surprising about Kylie posting on social media with some hot new hip hop playing in the background. There have been several cases of her offering seemingly free promo to rappers. Whether she’s paid or not, you can be assured that a sizable faction of her 157 million Instagram followers are going to take interest in whatever song she’s jamming to and head over to their preferred streaming service to save it.

Most recently, these followers were just put on to Moneybagg Yo’s single, “U Played”, which features Lil Baby and is produced by Tay Keith. In an Instagram story, Kylie is seen bumping Moneybagg as she rides around with friends. The video was taken the same evening that Kylie went to a Rosalía concert and flaunted her love affair with the Spanish singer backstage.

“U Played” appears on Moneybagg’s new project that dropped this past Friday, entitled Time Served. The project came as a surprise, as Moneybagg’s new boo, Ari Fletcher, announced it just a few days before its release. Things have been heating up quickly for the couple, as Moneybagg has already vowed to stand by Ari forever. A teenage girl recently passed away after a fatal rollercoaster ride in an amusement park in Jizzakh, Uzbekistan. The daredevil ride, unfortunately, came apart mid-air with passengers on board. The ride consisted of a metal pendulum arm with a counterweight balance which was attached to a massive open-air platform. As such, dozens of people headed straight for the ground after the ride broke hence resulting in a crash with several fatalities. Authorities allege that one teenage female rider was instantly killed after she was flung into the air from the 360-degree swing. As of yet, there is no other information with regards to the other riders’ injuries.

This situation has been linked to a similar occurrence with a ride at the Ohio State Fair which fell apart in July 2017 while it was in motion. The malfunction resulted in seven people getting injured and a 17-year-old teen by the name of Tyler Jarrell dying. Investigators at the time found out that the amusement park ride’s malfunction was mostly due to corrosion. As of now, no further details have been given for the Uzbekistan ride, but we surely expect greater details on the matter sometime soon. The victim was, however, identified as a teenage girl with the initials MH. Drake’s found a vintage seller in Brooklyn willing to go overboard with his assignment.

The word on the street is that Drake went WELL out of his way to procure the Dell Curry jersey he wore in Game One. Web journalists were able to trace the throwback’s origins back to Select Vintage in Brooklyn, where store owner Al Martiniello led a search party for the game-worn original with very little time left on the clock. Suffice to say, Martiniello was perfectly deployed as the broker in this situation. Within his contacts, Al was able to localized seller willing to part with the prized possession. From there, Al decided to hand-deliver merchandise within the only means at his disposal: his car on a two-way trip totaling 10 hours.

“Drake is a once-in-a-lifetime generational artist, so for me to do this for him and be a part of this is amazing. It was nuts,” Martiniello told the Canadian Broadcasting Corporation. It seems Martiniello was not only intrigued by the prospect of meeting the famous rapper, but also the distinction of partaking in the “ultimate troll” as he put it.

Martiniello admitted that he accepted the challenge without ever having seen a Dell Curry jersey up close in person. “As somebody who’s been collecting jerseys his entire life, I don’t know if I’ve ever actually seen a Dell Curry authentic retail one,” he added. Thankfully, the individual who ultimately sold the jersey to Martiniello was based in nearby Queens.

Dell Curry will be happy to note that his perimeter shooting was enough to cultivate him a modest little fanbase. The anticipation builds over Drake’s next troll job. During the Raptor’s series-clinching win against the Milwaukee Bucks, Drake famously wore an outfit inspired by 2Pac‘s courtside get-up in Above the Rim. 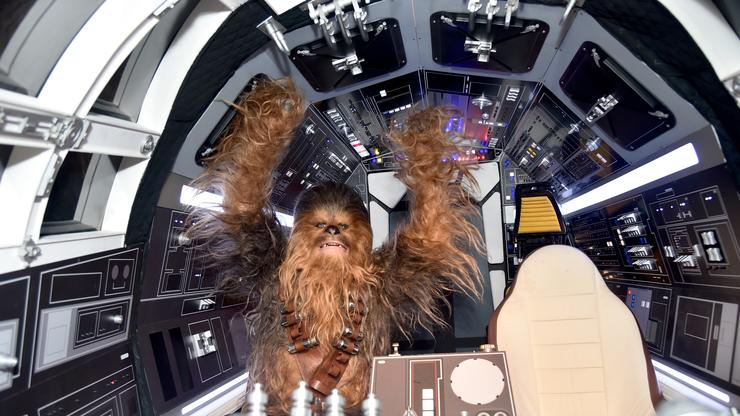 This Friday, Disneyland will unveil their latest crowning achievement - the long-awaited, 14 Acre, Star-Wars-themed Galaxy's Edge. For some longtime Star Wars aficionados and straight-up fiends, the new park will likely serve as pure escapism, an opportunity to voyage to the world George Lucas created all those years ago. As it happens, several publications including IGN were invited to experience the attractions and rides beforehand, providing their account of "Smugglers Run," sipping Blue Milk, and more. What's more, they were met by George Lucas, Harrison Ford, Billy Dee Williams, and Mark Hammil, who rang in the opening ceremony.

For many, the allure of the Millennium Falcon will be inescapable. An exact-scale replica of the cinematic ship, the Falcon is described as awe-inspiring to behold, likely to prompt many-a-selfie. As of now, the lone ride remains the aforementioned and apostrophe lacking "Smugglers Run," which has already garnered plenty of hype. Unfortunately, the IGN review appeared slightly underwhelmed with the ride itself, though she does praise the impressive visuals and attention to detail throughout the boarding process.

In short, Smugglers Run explores the territory covered by ride simulators of the past, albeit with an additional dose of interaction; six riders will be allotted three distinct positions of pilot, gunner, or engineer, all of which provide three different experiences. As the reviewer tells it, the pilot made for the most enjoyable position by far, given that the other two must allot attention to additional, non-main screens. Despite some flaws, the ride made for a thrilling experience sure to sate die-hard Star Wars fans of all ages.

Kanye and Kim's journey is one for the books.

Kanye West was caught by paparazzi but once more this previous weekend and as a substitute of opting to dodge the photographers, the "I Love It" rapper determined to offer them one thing to shoot, by posing in entrance of his customized Lamborghini Urus. In the clip under, you possibly can see Kanye hanging at the very least three poses after he tells the paparazzi to easily not ask questions whereas taking images on the similar time.

Clearly, Kanye's acquired mad love for his journey therefore his impromptu photograph shoot, and Instagram account GroupKanyeDay by day acquired its fingers on some up shut photos of the whip. Apparently, the wheels had been designed by Kanye himself and the matte tan colour is what makes the journey customized constructed. The inside has a royal blue colour pop, as seen within the images under, and general we're not shocked by the automotive alternative for each Kim and Kanye.

In different Ye information, it appears to be like as if he won't be retiring from the music recreation anytime quickly since his EMI contract states that he is required to pump out music for so long as their contract states. "At no time throughout the Term will you search to retire as a songwriter, recording artist or producer or take any prolonged hiatus throughout which you aren't actively pursuing Your musical profession in the identical fundamental method as You have pursued such profession thus far," the contract treads.

Kanye is arguing that his contract resulted in 2010 - learn extra on the matter right here. 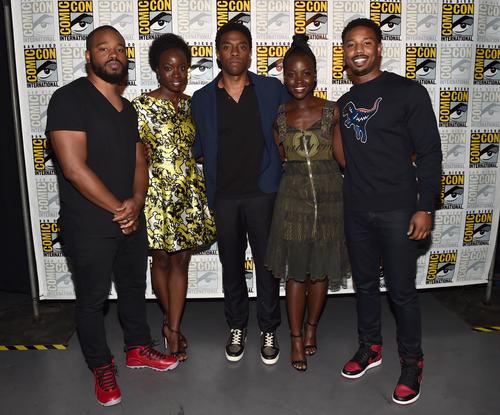 At a Wall Street investor conference on Monday, Disney's CEO Bob Iger reveals that there may talks to build a roller coaster ride inspired by the studio's highly successful Marvel film Black Panther. Iger has acknowledged that the box fice smash has become "an important moment in culture," which can almost guarantee its inclusion in at least one the various Disney-themed amusement parks globally.

The CEO also admits how guests have been waiting in droves to meet the Black Panther character at Disneyland in Anaheim, California.

When someone asked Iger how come there is "no ride," he was quick to admit that "we haven’t had a chance to build a ride. Though I’m sure there are people who are working on it."

By autumn, Iger admits that visitors to these rampantly popular amusement parks will "be seeing a lot ‘Black Panther’ merchandise.”

In the meantime, Disney is said to be beefing up its Marvel presence at all their locations, which only means that the current superhero du jour will also be given a prominent space amongst Iron Man, Captain America, Thor, et. all.

Black Panther is commanding the current cultural zeitgeist, and has quickly cemented itself as a cinematic force to be reckoned with.

Almand is a talented young producer signed to ICONS, sister label to PRMD – the label founded by Avicii’s old manager no less which should speak to the depth their A&Ring talent. Almand’s last single “Ride” with vocalist Tima Dee dropped on Friday and today the ficial music video was released.

The video features Almand in two main scenarios – once as a cowboy and another as a fashionable smartly-dressed city guy. In both scenarios he faces up against a comically represented ‘Bad Guy’ that might remind you a DJ. The video then shifts to focus more on Almand the cowboy and spirals into a comedic, yet absurd, interpretation the song’s main lyrics ‘to just ride.’