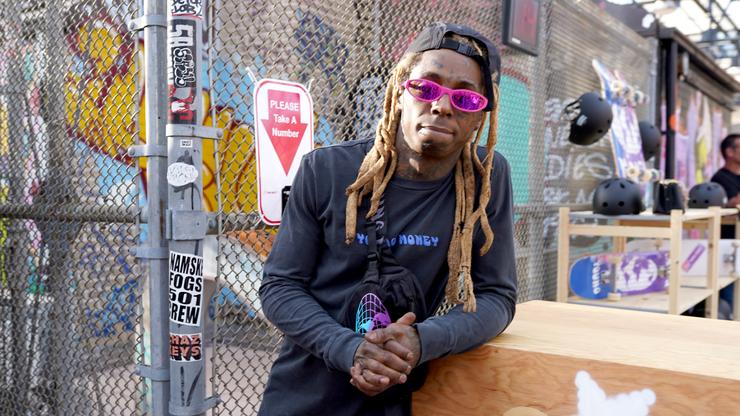 BAPE is one of the biggest streetwear brands in the world and for years, they have been impressing consumers with their loud designs and consistent branding that consists of the infamous BAPE gorilla. The brand has been propped up by various musical artists such as Pharrell, Pusha T, and even Lil Wayne. BAPE is well aware of Wayne’s impact on the culture and back in April, they used him to promote a brand new capsule in collaboration with UGG. Now, they are re-releasing the capsule with Wayne at the center of the campaign, once again.

As you can see from the Instagram post below, the capsule will feature what appears to be an incredibly cozy jacket, as well as some slippers and boots that feature UGG’s signature fluffy aesthetic. BAPE camo is incorporated into all of the pieces, including the huge mitts which match the brownish color of all the other pieces you can find here.

According to Hypebeast, this capsule will be making it’s return to the market on Saturday, November 9th so be sure to check out your local BAPE retailer for more details. Let us know in the comments below if you plan on copping any of these items. 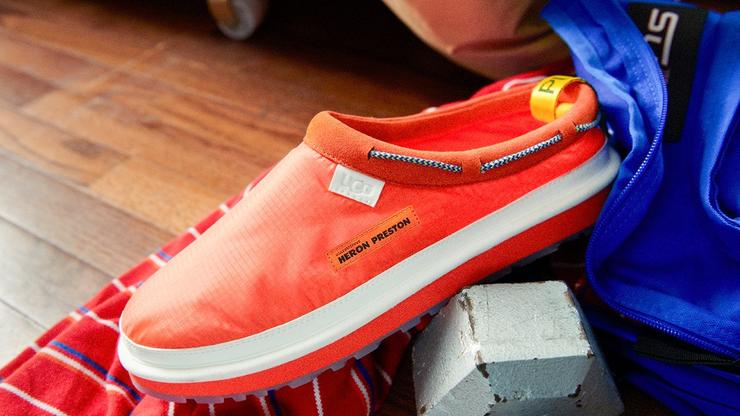 Both brands are dropping some fresh for September.

Cooler months are upon us which means consumers will be looking for some comfortable clothes and footwear to keep them warm over the next few months. One of the brands that have been at the forefront of comfy footwear is UGG who have teamed up with Heron Preston for a brand new collection. Fashionistas everywhere will be rejoicing in lieu of this collab as both brands are leaders in their respective fields.

The collaboration will feature two UGG models in the Classic Mini Urban Tech HP and the Tasman HP. Each model will have a black colorway, while the Tasman HP features an orange model. The Classic Mini Urban Tech HP will have a neutral “Dune” colorway which is mostly grey. These models are fairly interesting and will certainly appeal to those looking for a basic slip-on shoe/boot for the colder Fall months.

If you’re interested in this collaboration and wanted to cop something, you’ll be happy to know that the collection is coming out on September 26 and will be available online. According to Hypebeast, the Classic Mini Urban Tech HP will cost $450 USD and the Tasman HP will go for $400 USD. 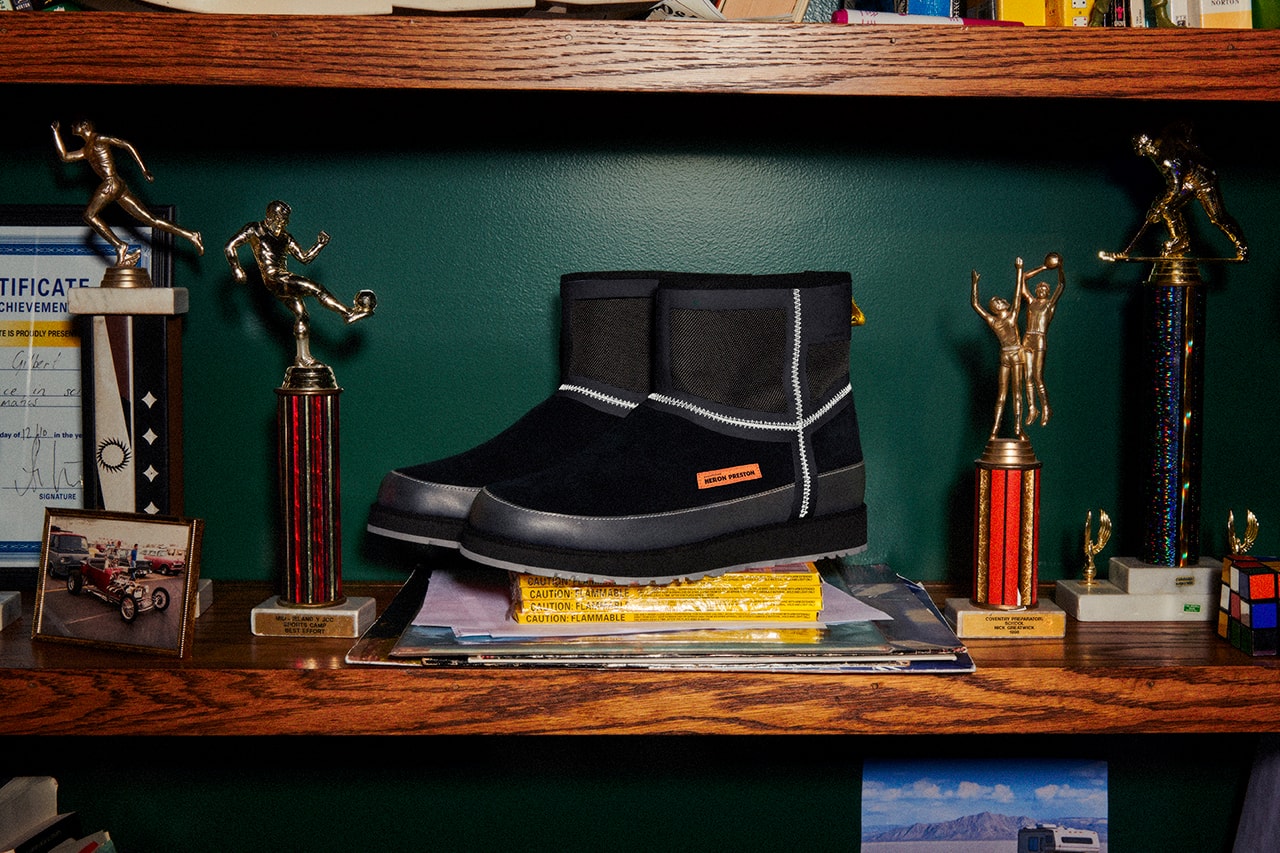 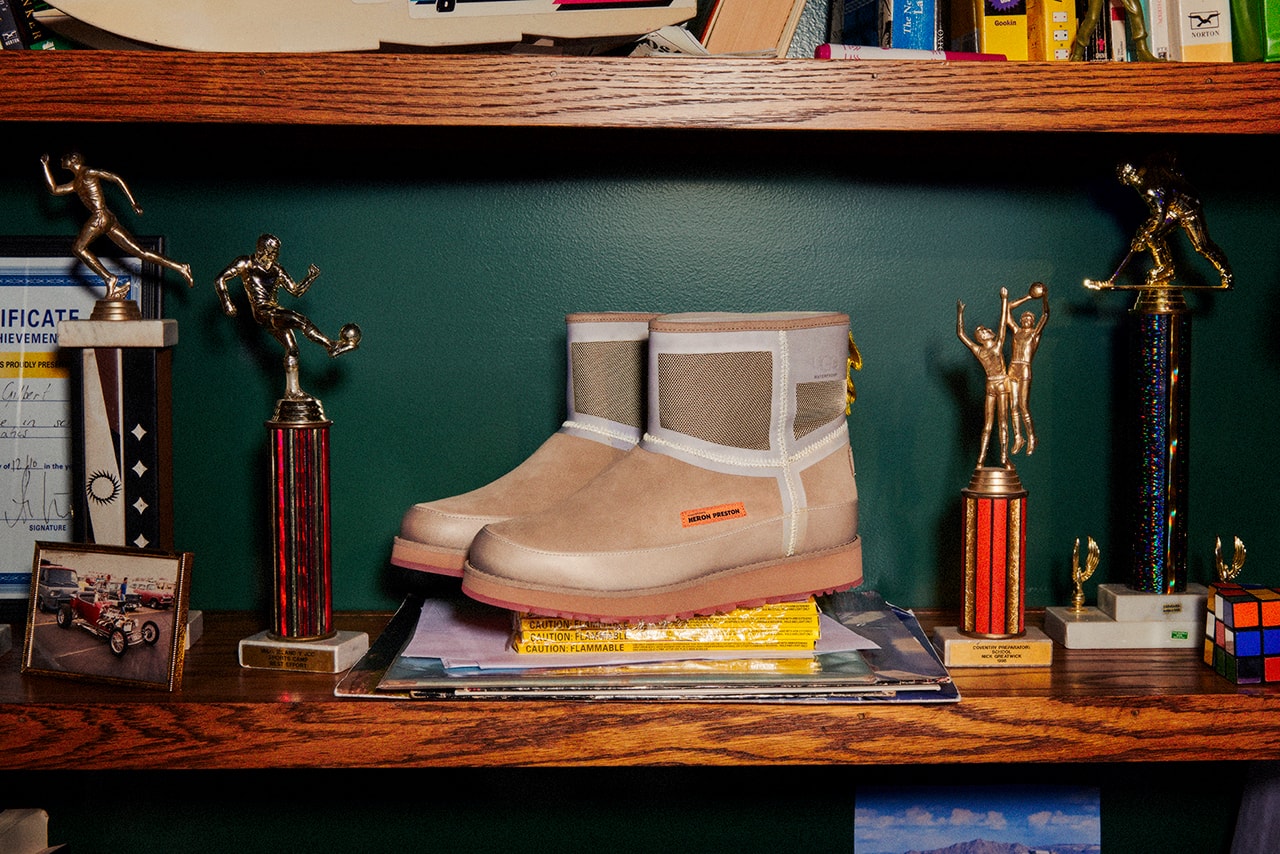 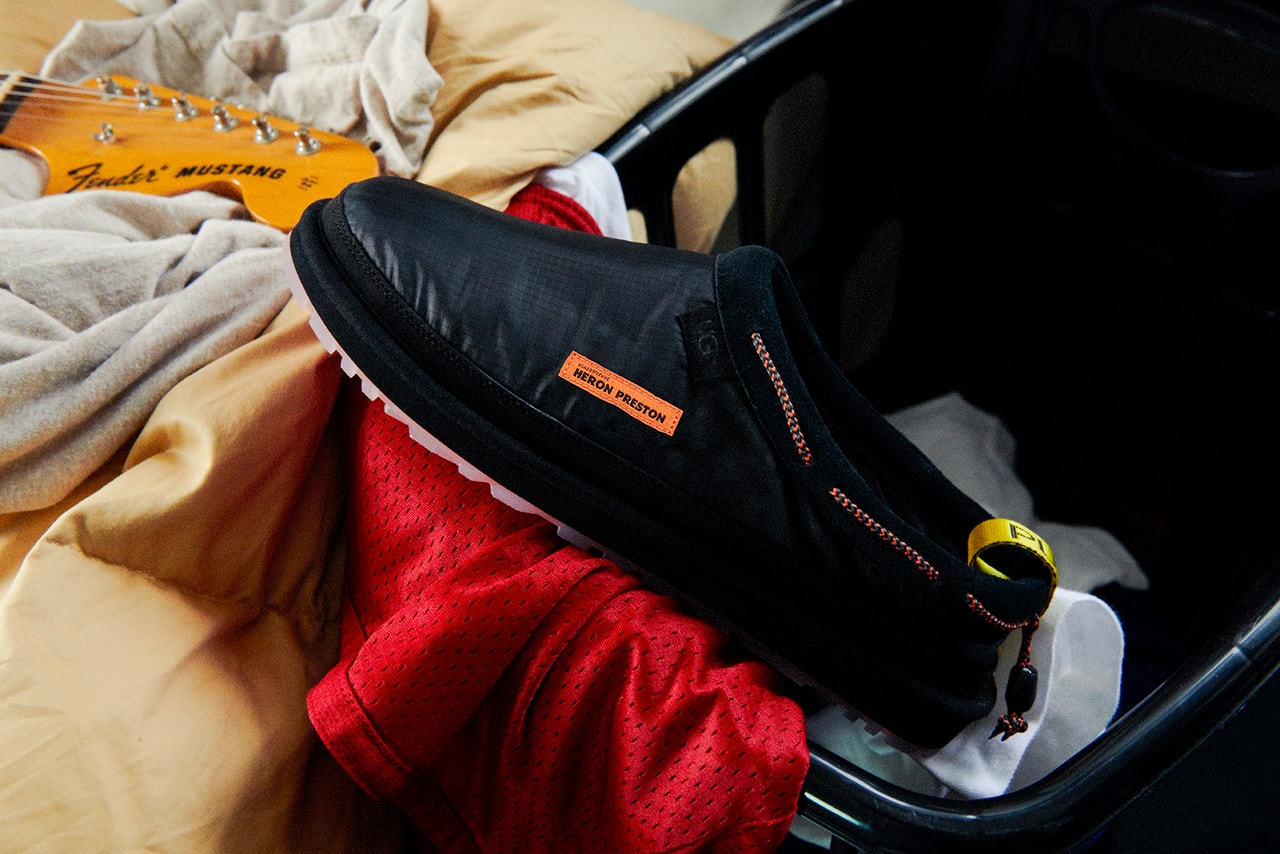 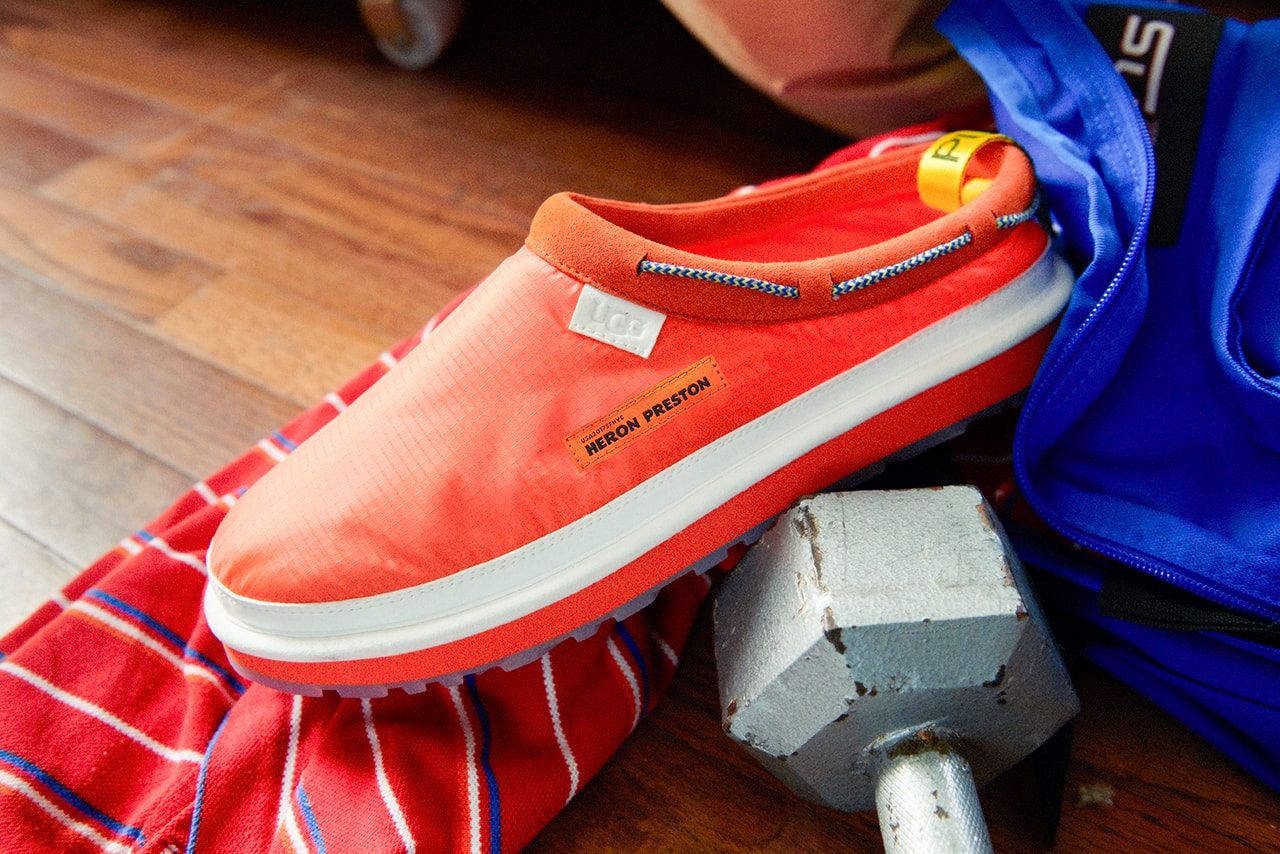 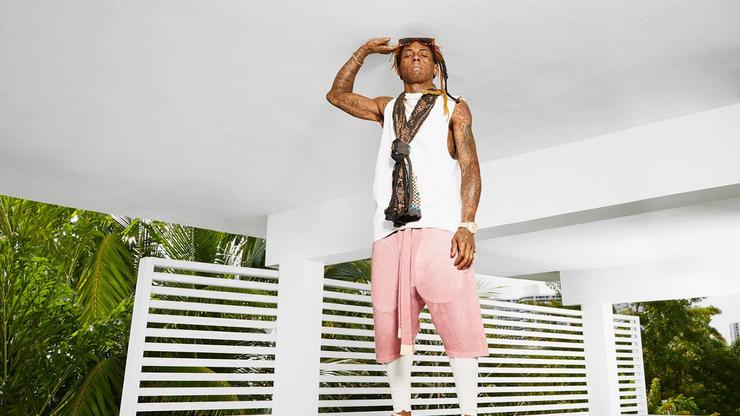 Lil Wayne Is The Face Of BAPE’s New UGG Collaboration

Wayne has always been known as a BAPE supporter.

Lil Wayne and BAPE have gone hand in hand for many years now. The megastar rapper has been known to wear the brand’s clothing on numerous occasions and BAPE has clearly taken notice. This weekend, BAPE will be releasing a brand new collaboration with comfy boot footwear brand UGG and the new promotional pictures for the collab show us that Wayne will actually be the face of it all. BAPE released the photos which show Wayne modeling a pair of shoes and a pair of slides.

The first pair looks like a mix between a pair of UGGs and a Chunky dad shoe. This pair has a brown suede upper that comes with UGG’s signature fur throughout. The sides also have the star bolt logo on the side, making the shoe have a bit of a Bapesta aesthetic. As for the slides, those feature brown suede as well, while BAPE is written across both feet in white fur. 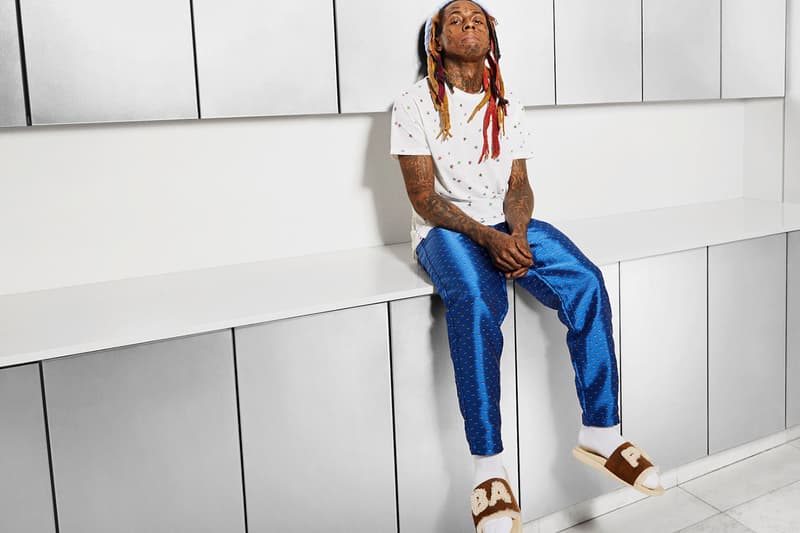 If you’re a fan of Lil Wayne and you’re a BAPE enthusiast who is looking for some comfy footwear for around the house, this collaboration is most certainly for you.

According to Hypebeast, both pieces will be released on Saturday, April 27th at BAPE stores and online over at bape.com. 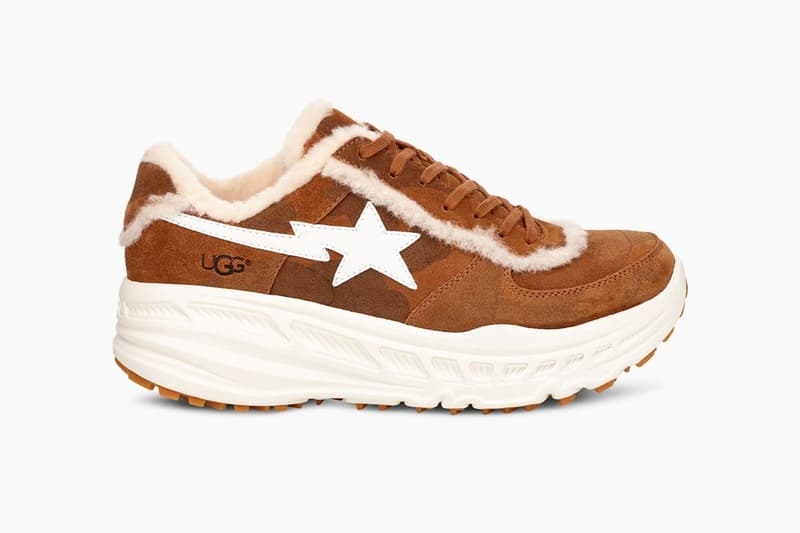 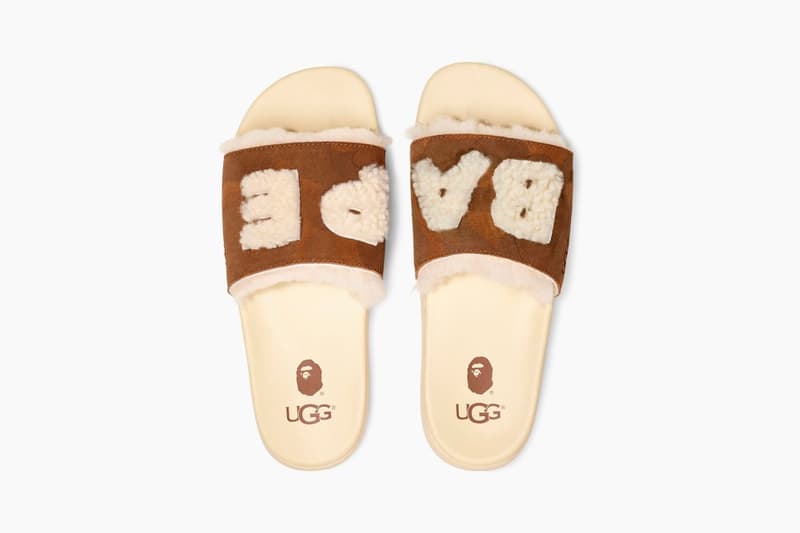