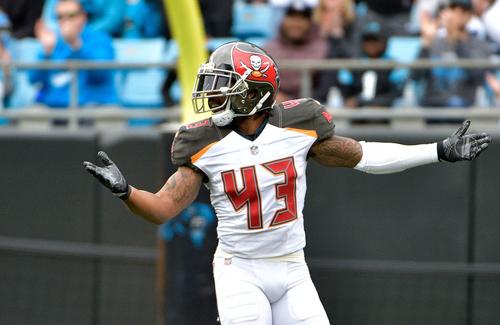 Tampa Bay Buccaneers safety TJ Ward was reportedly arrested in Tampa on Wednesday morning for possession marijuana, stemming from an incident that took place back in October.

According to TMZ Sports, cops responded to Ward’s apartment for an active intrusion alarm at 4:45 PM on October 25th and when they announced themselves at the door, a woman inside gave the ficers permission to enter.

Unfortunately for Ward, he had 99.9 grams weed sitting on a cfee table and police ultimately busted him and the woman for felony marijuana possession. He wasn’t formally charged until December 29th, which is when a warrant for his arrest was issued.

According to the Hillsborough County Sheriff’s Department, Ward was arrested at 8:11 a.m this morning and charged with possession marijuana and possession drug paraphernalia. He didn’t deny the weed was his, admitted that he smoked occasionally, and was later released on $2,500 bond.

The 31-year old safety signed a one-year deal worth $5 million with the Bucs in September after he was released by the Denver Broncos, but he was mainly used as a rotational player. The three-time Pro Bowler is scheduled to become a free agent in March.