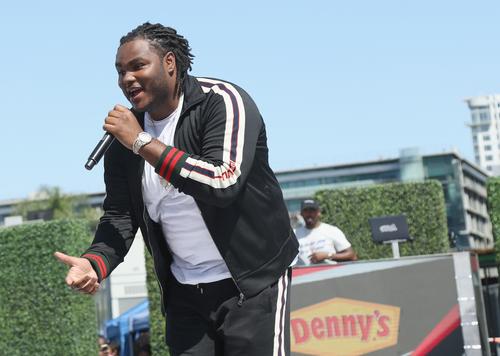 Detroit rapper Tee Grizzley has had an incredibly turbulent path to success. Although he’s been in the game for a couple years, and actually spent three years in jail, Tee Grizzley got his big break last year with the success his hit record “First Day Out”. The record garnered co-signs from Jay Z & Lebron James, the latter which helped tripled his record sales after one workout session & shared a clip him dancing along to it.

Now having come f his wildly successful year in 2017, which featured his My Moment mixtape & joint project with Lil Durk called Bloodas, Tee Grizzley is looking to continue his momentous run in 2018. In fact, fans will be happy to hear Grizzley has not one, but TWO new projects on the way.

In a new interview with XXL, Tee Grizzley revealed that he has a new mixtape on the way called Still My Moment, which will be followed by his long awaited debut album Activated. While he didn’t give us any time table for their releases, the Detroit rapper did say the debut album would be more about the slums Detroit and the people who live there, rather than the glamorous lifestyle.

“My debut album is called Activated. And we’re putting a mixtape out called Still My Moment. When people hear my music, they ain’t really hearing about no shiny stuff, the glamorous life.” Tee Grizzley said. “They’re going to hear that gritty, slum. It’s a dark cloud over my city. I’ve been through it and I’ma tell you in detail. A lot people just ride past the slums in their music. Boarded-up trap houses, cars parked on the grass. I’m going to take you into those houses, into the minds the people that’s in those houses.”