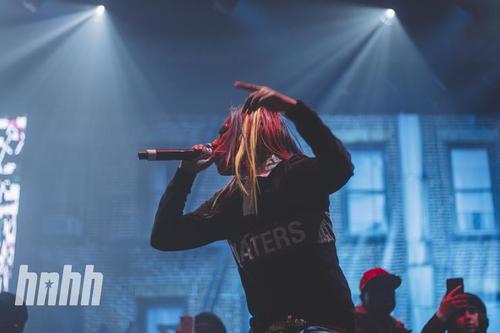 Following the massive success his hit single “Gummo,” which currently has over 100 million views on Youtube at the moment, and “Keke” with Fetty Wap & A Boogie, controversial NYC artist Tekashi69 might’ve just inked himself a massive record deal, unless he’s trolling us.

RELATED: Tekashi 6ix 9ine Has Message For His Haters

Tekashi took to his Instagram page a couple hours ago, to say that he just signed a $7.5 million dollar deal with the “Illuminati,” which he described as “signing his life away.”

“Right now I’m signing my life away to illuminati for 7.5 million dollars. Life is awesome,” he captioned the post, while a picture him & lawyer Bob Celestin “signing” some paper work is displayed. It’s unclear exactly where he signed to, or if it’s even true for that matter, but some reports suggest that Interscope Records is the label.

However, Interscope has yet to confirm or recognize his post, so it is possible that this is another one Tekashi’s infamous troll jobs, but we’ll have to wait and see.

RELATED: Who Is Tekashi 6ix9ine? Everything You Need To Know

Check out Tekashi’s announcement (below) and sound f in the comments. Is Tekashi 6ix9ine worth $7.5 million dollars?